Foraging for a sourdough link: Faviken Magasinet to Alaska 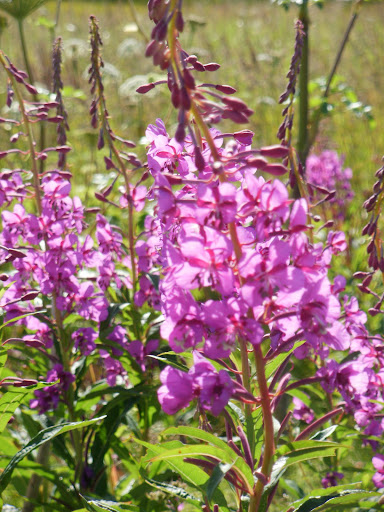 Lichens for dinner? Pine bark petit fours? Fireweed shoots and fiddlehead ferns? These appeared on the menu from Faviken Magasinet, as reported by FoodSnob blog, but could have been foraged from my backyard woods in the heart of Anchorage, Alaska which lies at nearly the same latitude as Jarpen, Sweden. Although no restaurant in Anchorage routinely serves lichens or fireweed shoots, many serve sourdough bread, also found at Magnus Nilsson’s “superlocavore” Faviken Magasinet.

The sourdough appeared in a description of a May meal prepared by Mr. Nilsson. Many of the courses offered — Wild Trouts Roe served in a Warm Crust of Dried Ducks Blood  for example, or pine bark petit fours for after dessert presented bits of nature that I don’t usually think of as edible. The methods of preparation were equally unfamiliar. Shavings of Old Sow and Wild Goose featured thinly-shaved pork from a sow that had been hanging to dry for two years, and slices of goose that were aged for nine months. Many of the other ingredients saw their beginnings in previous years — the “mature fermented mushroom juices from last year,” and the duck egg and sour milk liquors. Some dishes, particularly the scallops, were still alive when cooked at the table before the waiting diners, or, like the fireweed, had been foraged earlier the same day.Intriguingly, the sourdough bread was one of the few things served at the meal that would have been recognized and served without fanfare almost anywhere, especially Alaska. Made with 200-year-old sourdough from the chef’s grandmother, flour from wheat grown nearby, and the grandmother’s kneading trough, the end result was more about tradition than about emphasizing creative and minimalist presentations.  “Bröd och smör: Tove’s Bread and the Very Good Butter. As the bread was brought out, an old kneading trough was shown off. It was served with a story. This was the same tray that once belonged to Magnus Nilsson’s grandmother and her grandmother before her; it still harbours traces of the same sourdough culture she used – now over two hundred years old. The family connection does not end there: with this ancestral starter, flour from Järna near Stockholm and from an island in lake Storsjön processed together at a mill in Östersund, he uses his wife’s recipe to bake a pain au levain loaf that possessed a thin yet crunchy crust and dense, dark yet moist and fluffy crumb. It was simply excellent. The very good butter (its official name here), from close by Oviken and with a texture like melting cheddar, was superb too.” [from the Food Snob blog review]

The degree of focus on terroir — “the sum of the effects that the local environment has had” on the taste and qualities of a food, and attention to preparation of food found at Farviken Magasinet might seem limiting to most Alaskans, even those who work with the same principles of eating local foods. Kirsten Dixon, one of the state’s better known chefs (she recently appeared on the Today show) and cookbook authors creates with foods found in Alaska, but happily combines raw seaweed pulled from the Tutka Bay beach with flax seed, sun-dried tomatoes, lemon juice and cayenne pepper into sea crackers that have their roots in half a dozen different climates.

From her perspective, Alaskan cuisine is based in the many cultures that have left their mark on Alaska — the Alaskan Native peoples, the Russians, Asians, and the gold miners. She sees sourdough as representative of “hearty and determined pioneers.” Swedish cuisine as re-imagined by Mr. Nilsson with his innovations at Farviken Magasinet draws on local ingredients and techniques that have been used for generations within that one country, including his grandmother’s sourdough. And thus the sourdough bread that links the two cuisines is just as at home in the Alaskan repetoire as it is in Jarpen.

2 Responses to Foraging for a sourdough link: Faviken Magasinet to Alaska