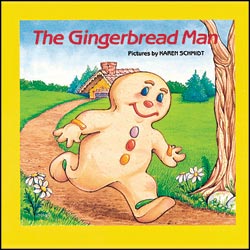 The gingerbread man’s one desire was to travel. Alas, he didn’t travel far, but he saw more of the world than the average cookie. 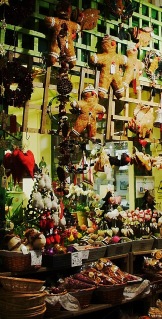 Gingerbread has a distinguished history since the Greek and Roman days as a medicinal, as a shaped bread served at fairs and sold as street foods from the Middle Ages on, and as decorations, especially at Christmas. Shakespeare refers to it in  “Love’s Labor’s Lost,” when Costard, Moth, and Holofernes are trading bawdy insults at the beginning of the play: “And I had but one penny in the world, thou should’st have it to buy gingerbread: Hold, there is the very remuneration I had of thy master, thou halfpenny purse of wit . . .”

For centuries, it was enormously popular because it could be made into shapes. The gingerbread man’s ancestors were complex molds, shaped like kings and queens. “The first gingerbread man is credited to Queen Elizabeth I, who knocked the socks off visiting dignitaries by presenting them with one baked in their own likeness. Gingerbread tied with ribbon was popular at fairs and, when exchanged, became a token of love.”

Gingerbread molds from the early 1600s. The gingerbread would be mixed, molded into these, and when dry would be taken out and painted. [Photo, Historic Food blog]

Drawing of Hansel and Gretel and the Witch’s Gingerbread House by Adrian Ludwig Richter (1803–1884), on Wikipedia Commons.

Building houses is another use, most famously in “Hansel and Gretel,” but many other places today, from full size houses in Texas, to gingerbread villages with dozens of buildings, populated by tiny people with muffs and skates.

The Greeks offered small cakes at different religious festivals, including those made of flour and honey (boun) in the spring. Funeral cakes, kollyva, are still made today in places. They were shaped from boiled wheat with honey and possibly spices, and could be tossed into the grave, or left as memorials later. Some were made in the shape of a person. Offerings to Demeter and Persephone included  wheaten cakes, also sometimes shaped like people -early versions of gingerbread men. Virgil refers to cakes that the Sibyl gave Aeneas to throw to Cerberus who guarded the entrance to Hades, made of wheat, honey, and sedative drugs (probably not ginger).

They also fed Athena’s sacred snake, with honey cakes (which may have attracted mice that the snake could then eat). If the snake refused them it was taken as a bad omen. One story had the Greeks leaving Athens because the snake turned up its nose at the cake of the month, which meant that Athena had left the city. They boarded their boats, and waited in the harbor, and were saved from the Persian invasion at the Battle of Salamis. It’s more likely that the snake didn’t find any mice, and wasn’t the least interested in the cake.

Romans followed in the Greek footsteps, offering spice cakes to the gods. They brought ginger from India, probably overland, and used it for digestion as well as for a seasoning. Marco Polo claimed to have discovered gingerbread in China, but Egyptians ate it in the days of the pharaohs. Gingerbread next shows up in 995 CE brought to England by monks, Others attribute its origin to the crusaders, suggesting that it came from the Middle East.

In Sanskrit, ginger root was known as srigavera, which translates to “root shaped like a horn.” There is evidence that it was used in China and India 7,000 years ago, making it one of the earliest known spices. One author suggests that cultivated ginger, like a number of other domesticated foods, does not grow in the wild. It can only be “propagated by splitting the root, never from seed.”

Ginger often was medicinal, as we now like to think of chocolate. Very early recipes don’t show gingerbread as a dough, but as a mixture of bread crumbs with sweeteners and spices — hence the name, gingerbread. Sacred foods and tasty medicines have often evolved into foods that are served as desserts or for special occasions. One writer hypothesizes that it was because they were served at the end of heavy feasts to settle the stomach, and gradually came to be appreciated for their virtues of taste, not just as medicinal. Chaucer’s Sir Thopas has “royal spicery/ Of gingerbread that was full fine,/ Cumin and licorice, I opine,/And sugar so dainty.”

“1 lb. Honey – I prefer organic, or something made with a flavored flower blossom, etc., but feel free to use your favorite. Just remember that the final product is affected by the flavor of the honey you choose.

Bread Crumbs – up to a pound, maybe more, maybe less. These must be UNSEASONED bread crumbs, though either white or wheat, or a combination, is fine. Be sure that they are finely ground and not soft in any way.

ground white pepper – up to ½ tsp.

pinch saffron, if desired, but not important here

Bring the honey to a boil and skim off any scum. Keeping the pan over very low heat, add the spices, adjusting the quantities to suit your taste. Add the food coloring “if you will have it red.” Then begin to slowly beat in the bread crumbs. Add just enough bread to achieve a thick, stiff, well-blended mass. Remove from the heat and turn the mixture onto a lightly greased (cooking spray works fine) square or rectangular baking sheet or shallow pan, ½ to 1 inch thick. Take a rolling pin & spread the gingerbread evenly out into the pan. Turn the pan over onto wax paper or parchment paper, & tap gently until the gingerbread  falls from the pan. Turn the gingerbread over once again, then cut into small squares to serve. (A diamond shape is also very nice.) Decorate with small leaves (real or candy) attached to each piece with a clove.”

One of the most interesting methods for making gingerbread was the process used during the 19th century in England and the U.S. for fermenting a treacle and flour sponge for months. One recipe by George Read (1834) for commercial production calls for alum and potash to be mixed with the treacle and flour sponge. Frederick Vine said that it was best to start the mix in the spring, and let it ferment through the summer into September before baking the gingerbread with it. He allowed as to how a one to three month fermentation would work as well.