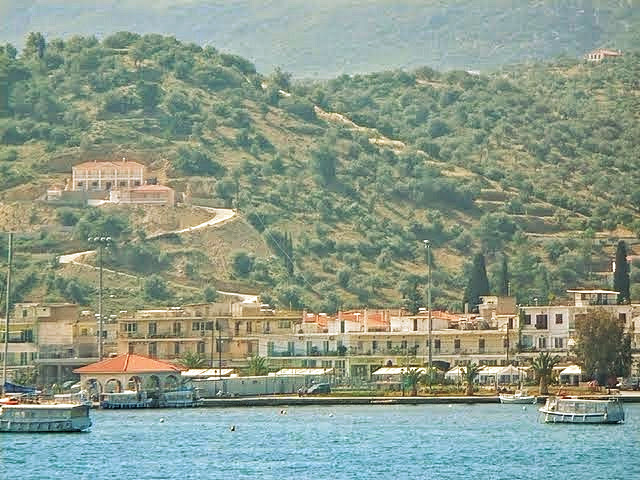 The island and city of Poros, taken from the ferry — what we were looking forward to seeing.

. . . Just getting to Greece is an adventure. Here are the first few installments of our travelogue for the Athens trip, which I’ve been jotting down for the past couple of weeks. It’s Saturday night right now. On Monday morning we’ll be leaving Anchorage, and on Wednesday, we’re off to Athens. Anthea’s safely there; she’s got an actual blog: http://antheaellinika.wordpress.com/2010/03/27/peripeteia-kai-routina/#more-45 – “Adventure and Routine” is the most recent. Look on the right-hand side of the page for the earlier posts.

If you’re dying to know the best vintner for retsina, we’ll do our best to track it down. But if you need to know about the Greek Mafia, we’re not your best choice. Myself, I’m looking forward to a few sips of Metaxa brandy.

March 13, 2010
The Carns family is heading east – Jim, Anthea and Teri, that is. Regina set foot on her seventh continent last August, when she spent nearly two months studying light and algae on the Antarctic ice. We are leaving her to her Ph.D. studies of glaciology and astrobiology in Seattle (although she will have been to Death Valley and Hawaii for spring break in late March and early April, so her travel itch will be slightly mollified).

Anthea decided on Athens for her study abroad semester. The program is run by AHA at the University of Oregon, and because student visas for Greece are a nightmare to acquire, the organizers have designed an 87-day program to fit snugly within the 90-days maximum time allowed in Greece without a visa. Classes start on March 23, and end on June 19, in between capturing many of the major Greek holidays and events – March 25, Independence Day; April 4, Easter; May 1, Labor Day; the opening weeks of the summer theater and music festivals. And the weather is better than at most other times – the end of March may be cooler and a bit rainy, but April and May bring wildflowers covering the mountainsides, and by June the beaches will begin to be covered with tourists.

The program offers full semester credit, and the friends who told Anthea about it (University of Alaska drama professors who taught there in 2005, and again last fall) assure her that she can expect to be writing at least a paper a week. Classes include “Modern Greek,” “Monuments”– that is, field trips to as many of Greece’s antiquities as can be squeezed in to 87 days, “Myth and Journey” – a writing class, and “Theater and the Healing Arts in Ancient Greece.” It’s a respectable curriculum that assures that Anthea will see as much of Greece as anyone taking the Great Tour in the 1800s, and will come away with perhaps more of it firmly ingrained in her memory and psyche than most.

Jim and Teri decided that this was an opportunity not to be missed. We both spent a decent chunk of the 1970s abroad, but having married in 1981 and proceeded to do the parent adventure, we haven’t left the northern hemisphere in thirty years. Time to find some traveling shoes and a passport and head out, we thought, and Anthea agreed that we could take her out to dinner a few times while we are in Athens. So the household has been accumulating guidebooks on Greece, dictionaries, new shoes, new backpacks, long lists of things like flashlights, duct tape, and notes for the esteemed house sitters.

Our days, the past few weeks, have been spent scouring pictures of the Athens riots for clues about the weather – “See? They’re all wearing jackets and scarves along with their designer sunglasses – must be chilly.” We squint at the guidebook photos – “Look – they all say dress modestly, but everyone in these café pictures is wearing shorts or short shorts, tank tops or less, and sandals.” Clearly the guidebook photographers are concentrating on the summer crowds, leaving out the less appealing winter weather and trips to monasteries (skirts required for women, if they let you in at all). We have taken a set of Greek lessons from a wonderful teacher who has tutored us in ordering food, being polite, how to count, and how to read all of the letters – epsilon, alpha, omega, and pi – that we know from math books and signs on fraternity houses (surprise – almost none of them are pronounced the way we are accustomed to).

We’re leaving behind a city buried in snow from the past few weeks. The driveway on March 13 is hemmed in with banks that are six feet high now, and extend ten feet back to the fences on either side. At 7:00 a.m., the light is just seeping in from the east; at 8:00 p.m., there will be a little color left in the west. We’re leaving behind snow boots, heavy coats, winter hats, and packing swim suits. We’re leaving behind a lot, having decided – even Anthea – to go with carry-on only. This is hard on the Carns family – only a couple of books each, not so many gadgets, not the extra thermos . . . 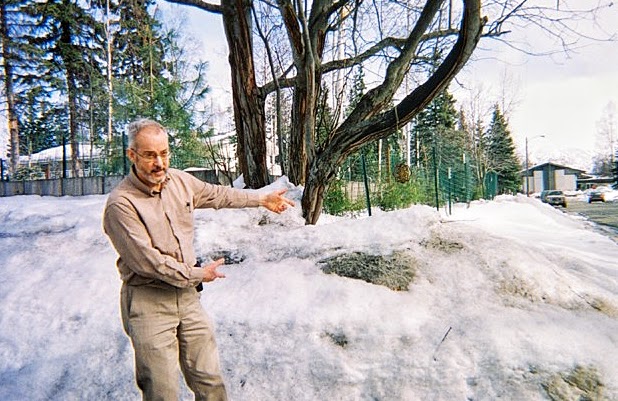 Much of the time has been spent making travel arrangements. Getting from Anchorage to Athens is expensive and time-consuming, involving at least two plane changes no matter how much you are willing to pay. And we weren’t willing to pay  much, so our trips are staged. Anthea leaves on Wednesday, March 17 for New York, where she’ll spend a few days with drama students from Carnegie in a Manhattan apartment with a Riverside address. Then she wanted a taste of London, so she gets there on March 22, spends just about 24 hours, and boards a plane for Athens. We booked a hotel for her at Heathrow last night – it’s Yotel, and provides seven square metres (about ten feet by six feet) into which are squeezed a bed, a bath with shower, a “luxurious mattress with organic cotton cover” (according to the website), and a heated mirror (huh?) – all for about $95 for seven hours (they charge by the hour). But it’s in Terminal 4 at Heathrow, with direct and free bus access to Terminal 5, so it’s reliable and convenient. She’ll meet up with three of the other students from the program on the flight from London, and they’ll be able to get from the Athens airport to their school as a group – reassuring when you know little of the language.

The parental units leave on March 29 for a day and a half in New York, and then a Lufthansa flight toAthens via Milan. The interesting part about the intercontinental legs of these flights is that British Airways is scheduled to go on strike on March 22, and Lufthansa workers are talking strike at some undefined time in the near future. And JFK, from which Anthea leaves (if she does) announced soon after we had booked her flight that all planes out of JFK for the next four months are likely to be substantially delayed because of construction on its major runway. Will the Carns family even get to Athens? Probably, but quite likely not on time. Will they get back from Athens? Also probable, but the timeliness is equally doubtful.

Another exciting feature of the trip is that Greece is in turmoil over its financial situation. At the best of times, apparently, the Greeks are likely to strike – today the transportation system, tomorrow the garbage collectors, next week the police or hospitals or hotels. They demonstrate their dissatisfaction with wages, benefits, hours, and life in general on a frequent, albeit random schedule. But these days they are more upset than usual, giving us many opportunities to see Syntagma (Constitution Square) from the vantage point of thousands of demonstrators. The photos on the Internet show squads of riot police with heavy black body armor and big clear plastic shields.

Beaches are a major feature of Greece. Swimming, according to one guidebook, is quite safe. There is the occasional shark. There’s a fish whose razor sharp fins can kill. And the occasional infestation of stinging jellyfish, which are usually harmless, but . . . The sea urchins the litter the sands in the shallow waters? Well, if you do step on them, you’re sure to get spines in your feet, and must use a lot of patience and olive oil to get them out. Other than that, swimming is great.

I’m still reading guidebooks by the dozen, but it occurred to me today that for answers to important questions – like whether there are Starbucks and McDonalds outlets in Athens – the Internet was the place to be. And sure enough – there are, at last count, 39 Starbucks stores in the Athens area, and 48 McDonalds in Greece. McDonalds notes that it has special foods for the Lenten season in Greece, including shrimps, veggie burgers and spring rolls. Don’t ask me how spring rolls became a traditional Greek Lenten food – we will try to solve that mystery once we’re there.

Friday, March 26, 2010
True countdown time. I got back late last evening from an overnight trip to Juneau for work, and put in a hectic day at the office trying – but not succeeding – to finish everything.

Jim’s been having trouble with his left knee for most of a year, and recently added a difficult hip to his repertoire. After several ups and downs, the recent one being yesterday and today, he finally got a doc who understood that the purpose of this was to get him to Greece and back with as little pain as possible. So he has more drugs, and better ones, and now is feeling like he might get there.

More in the next few days.