New York, New York, what a wonderful town
The flowers are up, and the rain is down . . .

Manhattan street in the rain.

That was the scene in Manhattan yesterday, with sheets of rain driven by a cold wind. The umbrellas were inside out, the puddles deep, and the taxis not nearly frequent enough. Nonetheless, we did the town.

When we landed at Newark near midnight on Monday and taxied to the gate, my impression was of vast plains of concrete, shiny with water that reflected row upon row of lights. When we took the shuttle to our hotel, the impression remained – more desert stretches of concrete, water, lights, and little else. No wonder people in the rest of the country think that Alaska is their personal wilderness treasure!

In the morning, the trek from hotel to Grand Central gave a more varied picture of the landscape – what we could see before clouds and rain obscured it. It was a non-trivial trip: shuttle to airport, AirTrain to the other side of the airport, and an hour and a half on the bus through Lincoln Tunnel and into the city. Of course, the last two miles took a third of that time; the other 18 miles were slow, but not mostly motionless. My commute in Anchorage is about seven minutes from driveway to office; people do this New York commute twice a day.

We met a friend from Anchorage who has moved to Connecticut – for less snow and ice, and to be closer to her kids in Manhattan. She suggested that our initial plan of wandering around Soho and the Village should be traded for something more indoors. So we hailed the first of several cabs and headed south to Chelsea Market at 15th Street and 9th Ave.

New York cab in the rain.

The way you hail a cab is to stand out in the street, just even with the parked cars and lean out to wave. Sooner or later, one pulls over, lowers his window (didn’t see any female cabbies), and (sourly) says, “Where to?” At which you say your destination, and he motions for you to get in. Later in the day, we were at the corner of 83rd and Madison (which runs north) trying to get to Grand Central (south). Every one of six or more cabbies who stopped, said, “I can’t go that way; going uptown.” The New Yorkers assured us that they are not supposed to say that, but none of them hesitated for a second (we eventually went over to Fifth, south-bound, and found one). The other important thing to know is that when you are at a spot with dozens of soaking wet people all trying to get a cab, you have an advantage by positioning yourself upstream, or maybe even at a corner where the cabs are turning onto the street you want to take. I thought – briefly, and a bit ashamed – about studies showing how selfish people are, and then got right out there and waved.

Cabs in New York are not like cabs in Anchorage or Juneau. They have little TV screens for the back seat that show ads, the weather, snippets of shows, with a crawl for breaking news. When you arrive at your stop, the screen shows your fare, along with a choice of tips pre-calculated – 15%, 18%, and 20%. You punch in the tip you want, and cash or credit. If it’s credit, you swipe your card, and a receipt prints out that the driver hands back to you. You accept the receipt, offer a silent thank you that you’ve survived another trip, and scramble out while the driver argues with the next set of passengers standing at his window.

Chelsea Market, like Pike Street in Seattle and many other reclaimed areas, was full of upscale food stores, a book store, kitchen supplies, and little restaurants and delis. We ate brunch and bought chocolate. I looked through a few tempting shops, but thought of trying to zip my bags closed with even one more pack of gum, and resisted buying. Chocolate was OK – we ate it on the spot.

Then we caught another cab, during the day’s one brief rainless hour, and headed for the Metropolitan Museum, to see the Greek statues there before we see their companions in Athens. After a couple of months of intensive reading – Greek history, maps of Athens, dozens of accounts of what to see – the beige marble statues struck me differently. They looked so familiar, suddenly, because everything in the West since then shows their influence. Many of the actual statues there were Roman copies of Greek statues that had vanished centuries earlier, and in the European statuary court, the influence of the Greeks spoke from every limb and drapery. We looked at small figurines from 2400 years ago, models of comic actors – they could have been made yesterday. Swirled glass vases? Their counterparts are being made today. It was as if time vanished because so little has changed in all of those centuries. 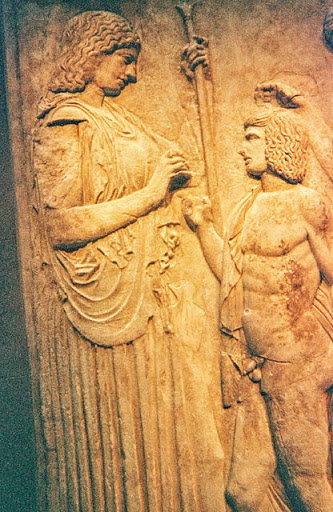 A reproduction of a relief of Demeter, the Greek grain goddess, and Triptolemus in the Metropolitan Museum in New York. Because the Eleusinian prince Triptolemus was kind to Demeter when she was looking for her lost daughter Persephone, Demeter taught him the arts of agriculture. She gave him a winged chariot drawn by dragons so that he could travel the world spreading her gifts of grain and farming, and made him a demi-god.

Other relics of early Greece came from another world entirely. The orange and black vases? Even though the lady with the bound-up dreadlock ponytail had a most contemporary hairdo, her clothes and face and gestures told an entirely different story than she would recount today. The men on the vases with their shields and helmets and short draperies lived in a time completely at variance with ours. The gold jewelry too, although some pieces were familiar from the museum reproductions, was breathtaking in its intricacy and perfection. So perhaps it was just the statutes – a head of Zeus looking very much like a boy friend from the late 1960s; Triptolemos in a panel with Demeter and Persephone closely resembling a kid I used to babysit – in their three dimensions that echoed today.

After the Met, we sat and drank coffee with Jim at an elegant chocolate shop (Voisges) that was run by an Indiana boy from Goshen (not far from Teri’s hometown of Buchanan in the southwest corner of Michigan). So we traded stories of northern Indiana, and how he loved chocolate and sought out the best chocolate maker he could find to work with. Getting the cab from there to Ali Baba near Grand Central was when we really got soaked, drenched, soggy – it was nearing rush hour and we trekked from one unrewarding cab-hailing spot to another. One friend said that the cabbies had decided to end their shifts at 4:30 or 5:00, despite the city’s best efforts to get them to change at 3:00 or 7:00, or something less disruptive of everyone’s lives.

All in all, it was a nice transition from daily life in snow-bound Anchorage to sunny Athens where we will join Anthea tomorrow. Here’s her latest blog, for anyone not keeping up with her on Facebook: http://antheaellinika.wordpress.com/2010/03/30/milao-milate-milai/

“Miláo, miláte, milái –  I speak, you speak, he/she speaks. – How awesome is today? Today I don’t have class until 2, and then it’s a class on ancient Greek theatre and the cult of Asclepios, followed by my first Greek lesson. That is a lot of awesome today.

. . .   Yesterday, Rachel, Dani and I walked to Syntagma Square to pick up Dani’s friend and our fourth roommate, Lauren. We took the tram home — which meant buying metro tickets from a ticket kiosk. I went first, since everyone looked uncertain. (I was uncertain, too, but . . . nobody else speaks any Greek.) “Ena?” [One.] I tried, and gave the guy a €2 piece — and got a €1 piece and a ticket back. Success! “Efcharisto!” [Thank you.] Rachel followed my lead, with similar success. When Dani and Lauren went up, they looked uncertain, and as I was coaching from the sidelines, the man in the kiosk was laughing and prompting them. “Ena,” holding up one finger. “Ena.” One.

Moments like that give me a little firework burst of delight in my chest, the same display that goes off when someone asks me a question about a play that I can rattle off the answer to. I know something useful, and I know how to apply it. I try to keep those fireworks inside, because I hate coming across as a know-it-all, but the triumph is there anyway.

Just a little bit of prep has made such a difference — and it’s still not nearly enough. I wake up every morning thinking in English, and the sound of people conversing in something other than English is a much needed part of my morning routine. I am not where I was; this is not home.

Except the truth is, it’s just not home yet. Maybe, by the end of my time here, I’ll be able to write a whole blog post in Greek — very simple Greek, but Greek. That’s when I’ll know I’ve arrived.”

We’ll be back in a day or two with the best from the ancients.