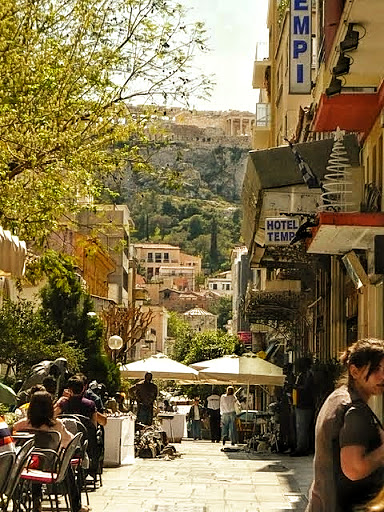 A street in the Plaka, the old section of Athens. At the top of the Acropolis is the Parthenon. The trees are just getting their spring leaves, and the sun is warm.

Jim’s notes: Jim summarized his view of our travels thus far, and his perspective is the focus of today’s news:
“We have only been here a few days at this point. We are in sight of the Acropolis and just a short walk from the Acropolis museum and its Metro subway stop. We only get to stay in this apartment a week, and then we move to another place not too far from the Parliament building. We will stay there a week, and then take a 5-day side trip to Israel. And then we return to our original apartment in the hostel for the last few days of our stay. 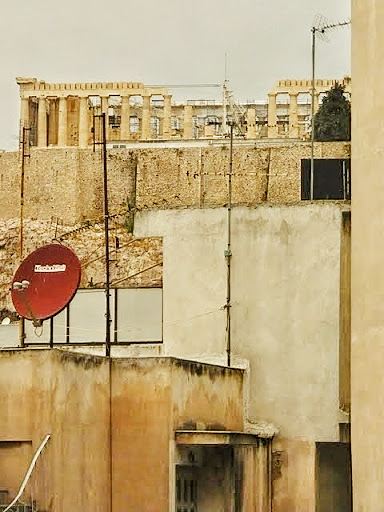 View of the Parthenon from our studio apartment. Granted, there’s a fair amount of urban clutter between us and it, but it’s the Parthenon. We can see it from our balcony. It’s worth a pinch or two to be sure that we’re really here.
So far we have been to the Epitafios ceremony on Good Friday (Big Friday in Greece) and followed the crowd of worshipers up one of the main streets as we all marched,  carrying candles, behind the ceremonial bier of Jesus. We have seen the guards in front of the Presidential Palace changing places in a extraordinarily stylized march. That was kind of cool. We have seen a host of beggars, North African street vendors (sunglasses, “name brand” hand bags, and splat toyshttp://www.youtube.com/watch?v=Ri69ZkW1nvQ). The vendors spread their wares on a sheet and stand around waiting for a sale. The splat toy vendors throw their toys against a square board in a slow rhythm that has a certain meditative quality. Nobody says anything and they periodically roll their wares back up in the sheet and move to a new spot. There are dozens of these guys and I haven’t seen a sale yet.

Street vendors, Flickr photo.
We have ridden the subway (one stop). We have seen the 1896 Olympic stadium, always empty, and a fine marble and limestone structure. In fact we walk past it every time we go to Anthea’s apartment. 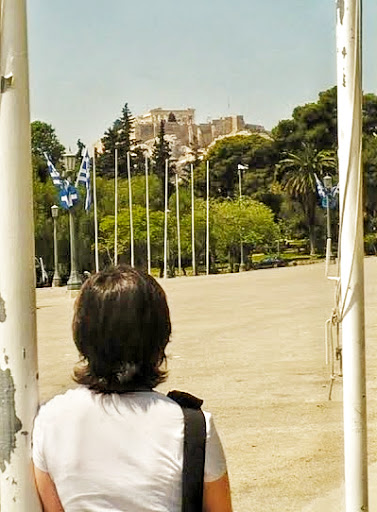 Anthea looking up at the Parthenon and the Acropolis from the Olympic Plaza.
The streets are about as far from a rectilinear grid as is possible, and we have to pay close attention to keep from getting lost, even when we are walking from Anthea’s apartment to our own, which we have done daily. It’s nice when we can spot the Akropolis and get our bearings. 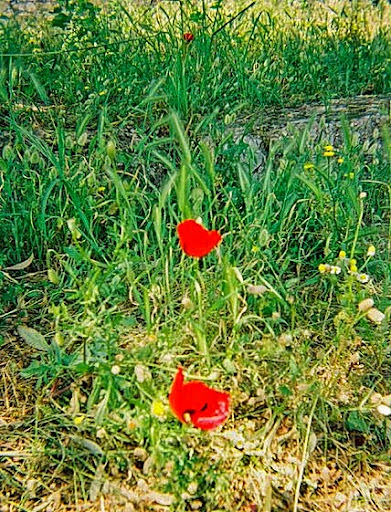 Anemones and yellow hawkweed, with new grasses, at Kerameikos (the ancient cemetery for Athens).
Ah but the weather is fabulous. After five months of winter, it is good to jump straight into summer.

Teri’s notes: A few other notes on Greek Easter. After the midnight bells and guns and fireworks and chanting broadcast for blocks around, actual Easter Sunday was very, very quiet. Jim and I walked the mile and a half (so Google says – it’s all uphill and takes us about 45 minutes, so I’m inclined to call it at least two miles) to Anthea’s and attended the Catholic Mass at a little church in her neighborhood. We recognized bits and pieces of the liturgy – especially the Alleluias, which despite having a different pronunciation were set to melodies we know well. 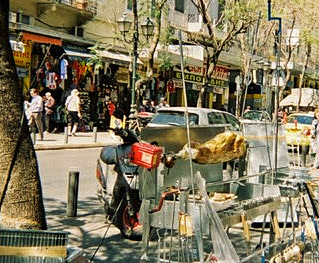 Fake lamb on a spit, advertising the spits and grills (on Athinas Street, the day before Easter). 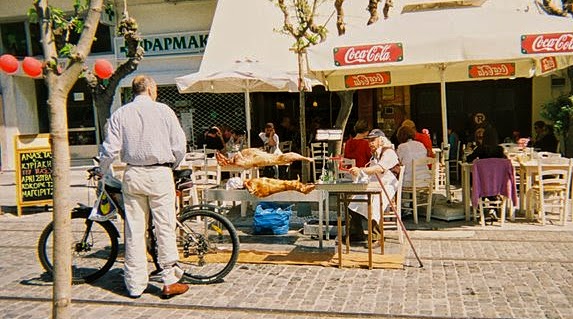 Roasting a pair of lambs on spits outside a cafe, Easter Sunday, Athens.

We got back to our studio at noon, passing a nearby café where a man sat turning a lamb on a spit. The smell of roasting lamb filled the neighborhood for the rest of the afternoon and into the evening – we went by the café several more times, and each time someone was turning a lamb on the spit. Once it was an old lady; another time an old man. I asked at 6:30 how many lambs they had done today; the person on spit duty at the moment said that it was the third or fourth, and they would be doing at least a couple more. 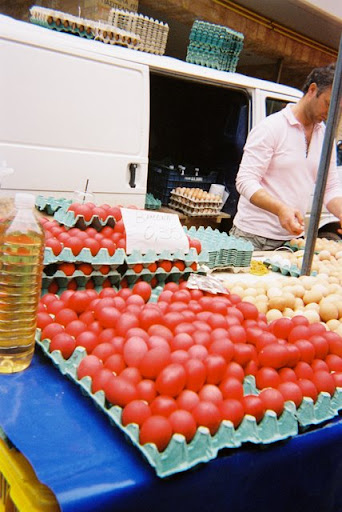 Another featured food of the day was dyed hard-boiled eggs. These are solid colors, most often a traditional deep rich red. There were red eggs nestled in the middle of round loaves of bread, red egg shells on the sidewalks, red eggs handed to us by the Greek family dining next to us in the taverna this evening. I don’t know that they are meant for eating – most have been out of refrigeration for hours or more, and I didn’t see anyone indulging.
Jim stayed at the apartment for the afternoon, still catching up from jet lag, and I went back to Anthea’s apartment where all of the students (and two of the teachers) in the group were watching the 1981 “Clash of the Titans.” Part of the course studies, sort of. Tomorrow the group plans to watch the remake that just came out, and we may join them. The 1981 version appears to have been shot largely in Arizona. It features lines for the gods that would earn a thunderbolt for corn if the gods cared (Laurence Olivier played Zeus, for heavens’ sakes, and Zeus didn’t strike him down or sue him for mis-portrayal), and a robotic owl that rivaled anything Disney ever produced for cuteness.

Bubo, Athena’s robotic owl in “Clash of the Titans (1981).”
It was another gorgeous day in Athens – mid-60s with a sweet breeze, and the golden-brown Parthenon on the Acropolis hill against a deep blue sky at random moments as we walked along. It’s beginning to seem like this could go on forever, but by June and July and August, it will be 100 degrees and merciless. Luckily, we’ll be in Anchorage by then, enjoying mid-60s with a sweet breeze – possibly a brown moose silhouetted against the deep blue sky. It’s not exactly equivalent, which makes being in Athens all the more fun. 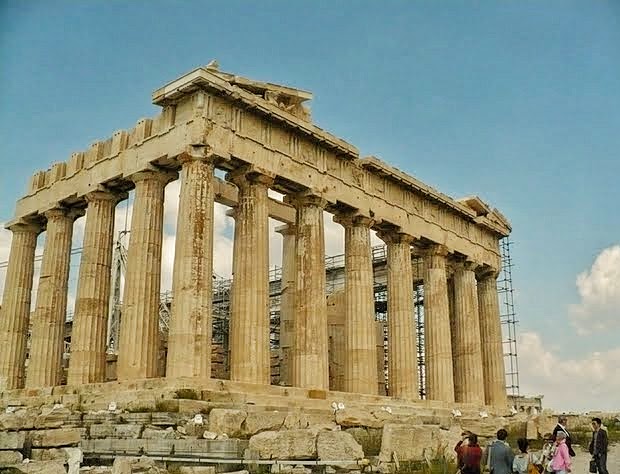