Posted on November 16, 2013 by Road Trip Teri
On Thursday evening, plotting out our Friday doings, I picked up 25 London Walks. We wanted to take the boat to Greenwich, but this book suggested walking the distance — between four and five and a half miles, it said, from Tower Bridge. That sounded well within our ability, so we set aside Westminster Abbey for yet another day and got ourselves to Tower Hill at 11:30. When we arrived at the Greenwich pier at 3:00, we had logged six and three-quarters miles. The difference in part was the fact that the description of the walk was written around 2000, following as much as possible a walk that Samuel Pepys liked to take in the 1660s. In the intervening decade, someone has spent substantial chunks of money to finish the work of marking out and putting up signs for a path all along the south side of the Thames. Places where the author had to cut inland  in 2000 and take a fairly straight route now follow the edge of the river more closely, which means that the whole route is more intricate and longer — but also, almost entirely along the river. [For the record, my research says that the Thames Path runs about 180 miles from the origins of the river to its mouth; this was only a small part of the trail.]
The Thames is a big river, brown and rolling, and as we got closer to the ocean, grew waves and whitecaps, and began to look much more like a trapped sea than a river. A fresh wind blew off it all day, and the sun warmed its chill. The trail, on a Friday midday, had a few bicyclists and joggers, here and there someone pushing a child in a stroller, and maybe two dozen other pedestrians in the six-plus miles. Most of the distance the paved path ran between the sea walls and expensive apartment buildings, many of them modern. Old landmarks, a few parks, and some detours punctuated the stretches of uninhabited (as far as we could tell) blocks of glass and brick.
The Thames Path where we picked it up just south of Tower Bridge on a street called Shad Thames in the old city of Southwark, the site of much of the shipping and some industry in the 1800s and earlier. 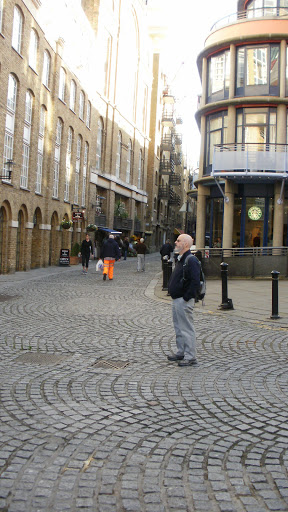 A baker putting bread into the oven in his narrow shop on Shad Thames. 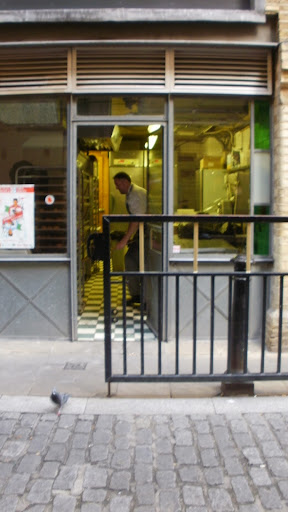 The north side of the Thames, east of Tower Bridge. An actual barge is speeding past; most of the boats on the water seem to be cruise boats and ferries for people. 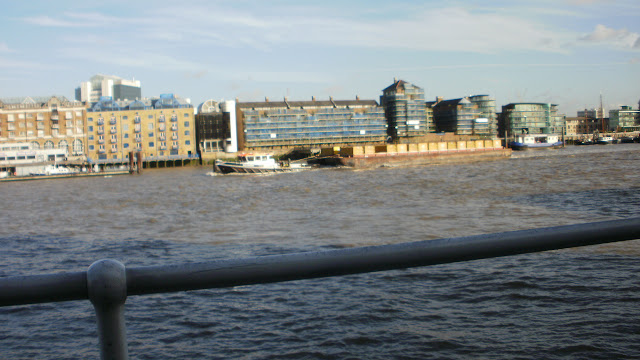 An attempt to keep the riff-raff out. We saw signs for “anti-climb” paint elsewhere too. It is described as a thick oily coating that keeps intruders from getting a grip. 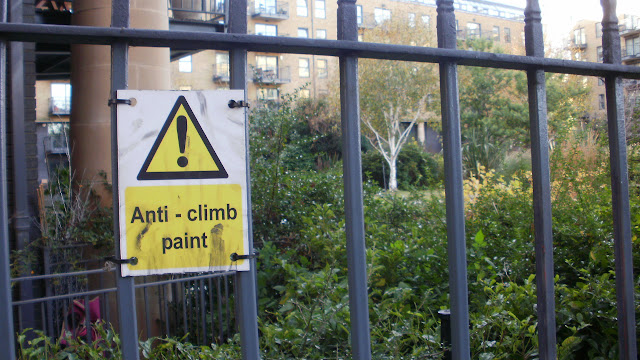 A churchyard in Rotherhithe with old gravestones and new children’s playground equipment juxtaposed. Rotherhithe Street is the longest in London, all of two miles. 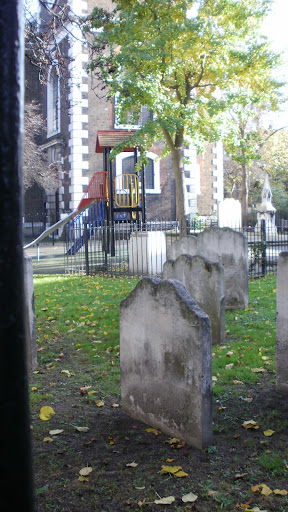 A very odd and recent statue of a Pilgrim and a boy reading the “Sunbeam Weekly” — which apparently has the story of the Mayflower’s sailing. It commemorates the fact that the Mayflower set out from an inn near by on its way to pick up the Pilgrims bound for the New World. The plaque for the statue says that if someone from the New World (that would be us) puts a small object in the Pilgrim’s Pocket (visible on his hip) that person will have new and interesting changes in his or her life. So we put in 2 pence (Jim) and a binder clip (me), and will report on the outcomes. 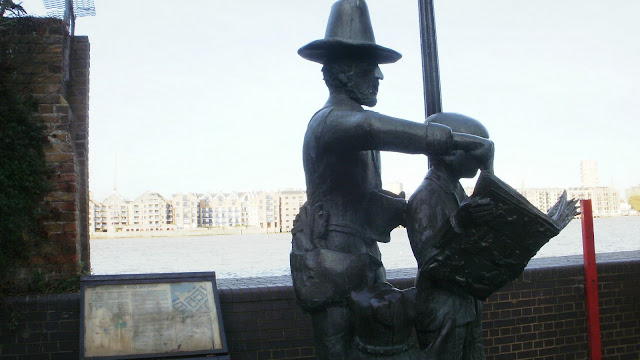 London is full of history, but also of large numbers of big new buildings. These are on the north bank of the Thames. 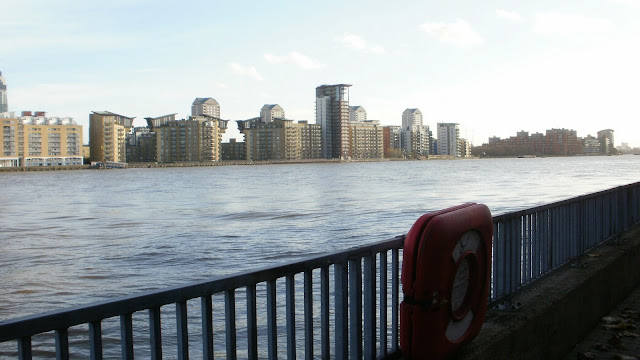 The west entrance to Surrey Dock Farms along the Thames Path. It’s described as a two-acre working farm, with bees, gardens, animals, a blacksmith shop, cafe, and so forth. Similar beautiful and intricate gates appeared several other places along the path. 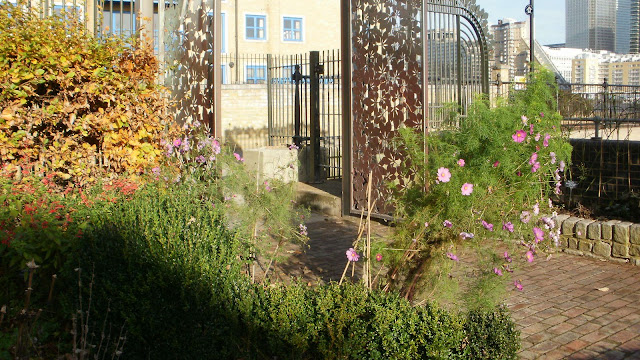 Violets, a spring flower, blooming in the Surrey Farms herb gardens on November 25, 2011. I had read that London has had exceptionally warm weather and that the spring flowers were blooming — here’s proof. 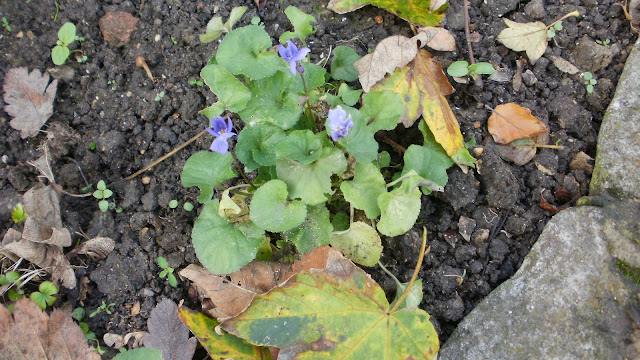 Old locks mechanism at South Lock, near Deptford. These locks appeared to be abandoned, but there were others at work further on. 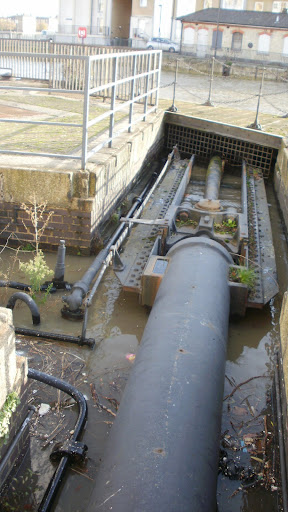 Cormorant on an old boat docked out in the river, doing a mating display for its intended. 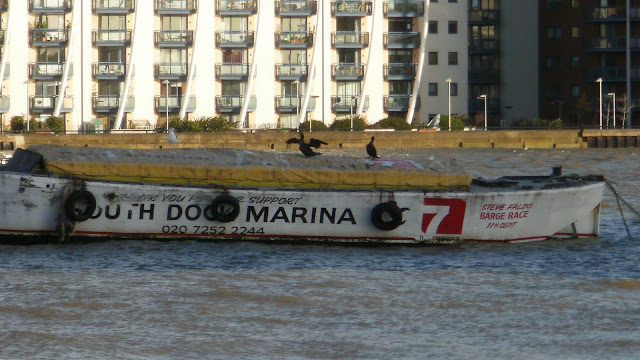 A mulberry tree that was bearing fruit in the 1660s, and still is today. It’s in the (large) garden, Sayes Court, that belonged to Pepys’ friend John Evelyn. 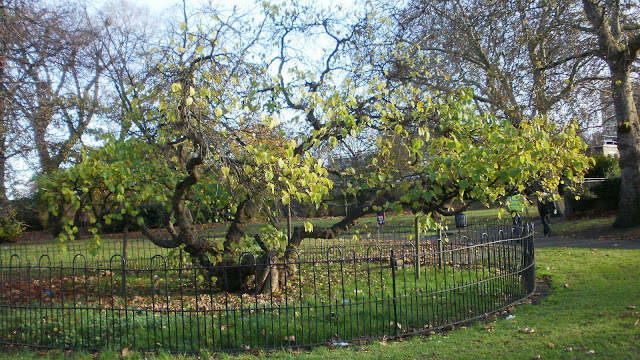 The etched glass door window of the Dog and Bell in Deptford where we shared a half-pint of Fuller’s Black Cab ale, a very tasty, very dark brew. We will miss the Annual Pickle Festival competition tomorrow evening, to which the locals will bring homemade breads, pickles, art and photography, and cakes for judging and awards. The pub is 186 years old, according to its website, and between the pool table in the back, and the several small rooms, the garden out back, and old wood bar in the narrow front room, it epitomizes the classic English pub. 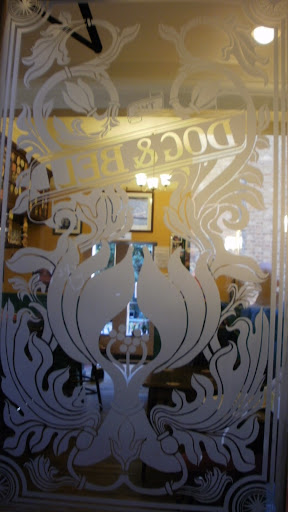 A fine old car on a back street in Deptford. 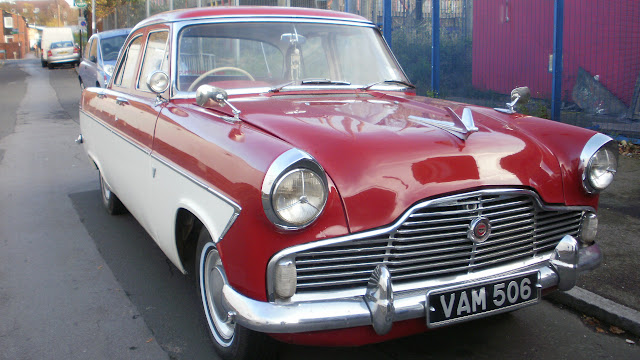 A strange set of statues in Deptford commemorating Peter the Great, Tzar of Russia, who visited London in 1698 and 1699. He spent a good part of that time living in Deptford at the home of Pepys’s friend, John Evelyn while he was studying English ship-building. Accounts of the time suggested that the Tzar and his household destroyed a great deal of the furniture, broke windows and generally wreaked havoc — perhaps more from high spirits than maliciousness? One blog says that the dwarf is in the group because Peter was fascinated by people with “genetic anomalies.” [http://sarahjyoung.com/site/2010/11/23/russians-in-london-peter-the-great/] 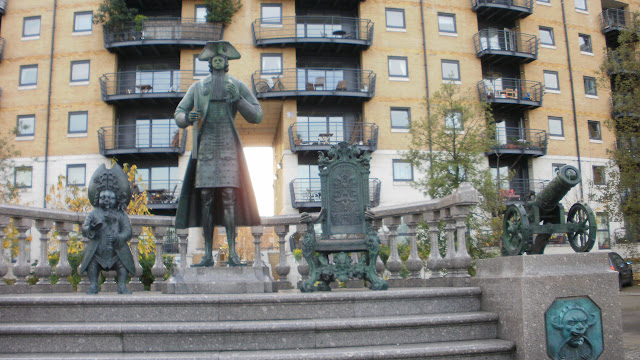 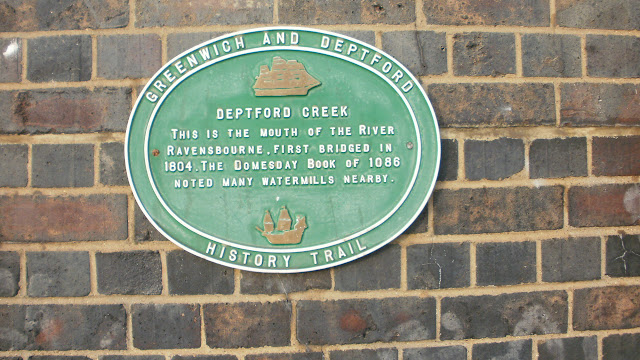 The river lapping up against a beach of brick and pottery shards, with shells and stones, at Greenwich. 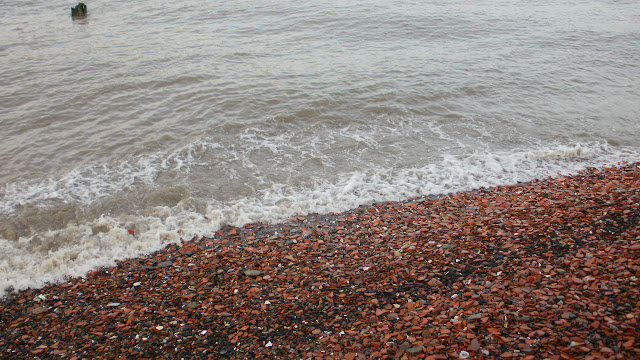 Jim standing in front of the marker (white sign on the wall behind him) for the Prime Meridian, 0 degrees of latitude. He is standing with one foot in the western hemisphere and the other in the eastern hemisphere. 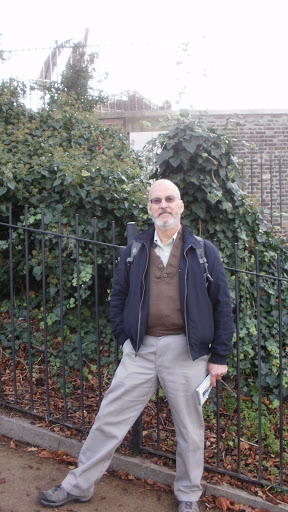 A view of London, looking upriver from the Greenwich Observatory hill. 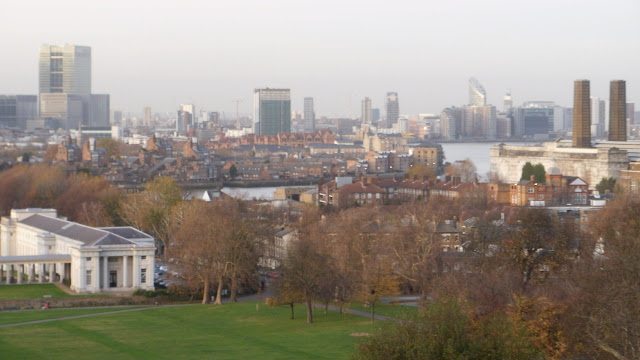 Old and new in Greenwich. Most of the main street in Deptford appeared to be working-class Vietnamese and other immigrant cultures. The Vietnamese restaurant in Greenwich was more upscale. 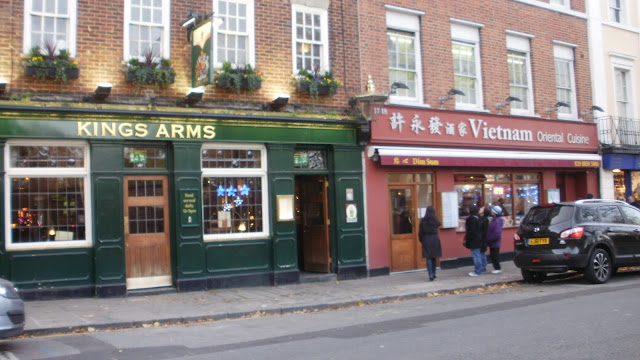 Tower Bridge, about 4:25 p.m., from the front of our boat that took us from Greenwich to the Embankment at Westminster (well, sort of to Westminster; it was still a half-mile walk to the Tube station). 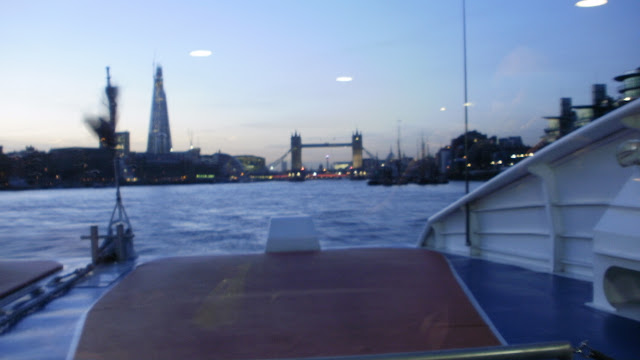 The London Eye at 4:50 p.m., from the Victoria Embankment on the north side of the river. Dark already. 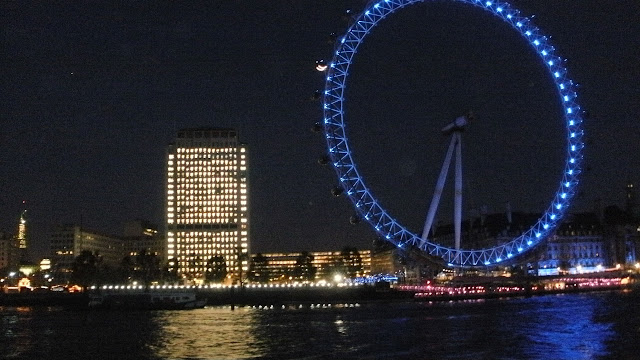 And that was most of our day. We went to dinner at a nearby Greek restaurant, and came home to research the news that a general strike of 3 million workers is planned for Wednesday, November 30. It’s expected to severely affect air traffic because all of the people who staff the immigration booths at the airports are joining the strike (the basic transportation workers are not striking, however, because everyone else will need to travel to the sites of demonstrations). In theory it shouldn’t affect our travels because we leave about noon on Tuesday, and are outbound, not in-bound. But  . . . we are hoping for the best.