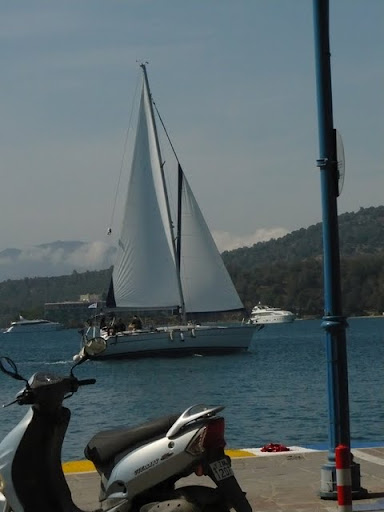 Six-thirty in the morning was half-light in Athens, with the Acropolis set against Homer’s “rosy-fingered dawn.” A few birds were awake enough to sing, but none of the people on the Metro (including us) were awake enough to look anything other than glum. Our trip to Piraeus and our search for ferry tickets and the ferry was uneventful, and at 8:00 a.m. the Apollon Hellas moved out into the sea with us and about fifty teenagers among its passengers. 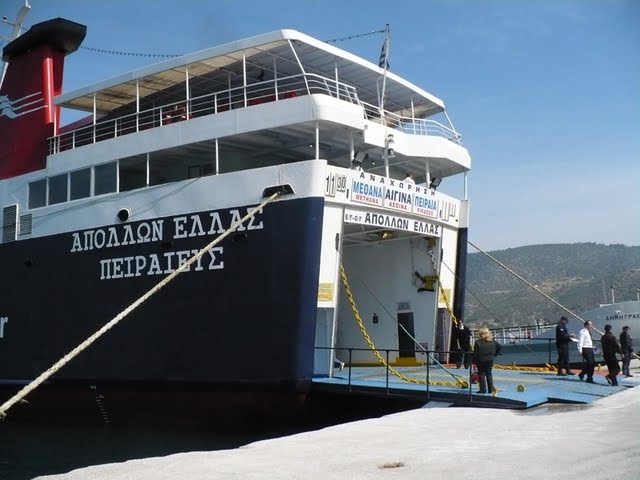 Luckily, the teens were bound for Aegina, and left us in peace after that. During their hour as our companions they never ceased their chatter and movement, like flocks of sparrows or maybe seagulls – not as musical as sparrows. They settled in a group for a moment, then rose up and flung themselves around and settled again in a different grouping. Mostly the boys clung together and the girls swarmed separately. The boys played cards, threw paper wads, ate. The girls chattered, got drinks, ate, finished the drinks, chattered, regrouped. I tried napping, but couldn’t miss the crescendoing excitement, louder laughter, cheers, more laughter, shouts, clapping . . . 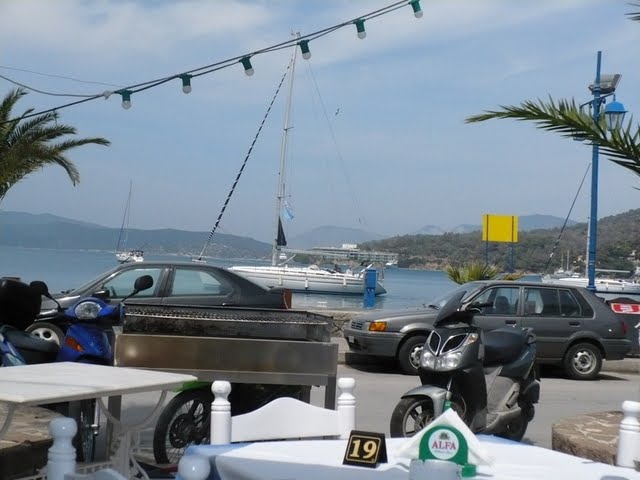 We spent a pleasant and very low-key day on Poros. We tried, for the first half-hour walking along the main street, to locate a guidebook to Poros. Some shopowners seemed insulted that we asked, and others looked at us with profound blankness – what do you mean, and why would you want such a thing? So we relied on our feet and eyes to find out what was interesting about that island as distinct from all of the others. Food and coffee were the first things; we ate an early lunch at Poseidon’s Taverna – pizza margarita for Jim, fried zucchini slices and tomato fritters for me, “weird” spaghetti for Anthea, most of which was left behind, and a basket of good Greek bread with olive oil for dipping. 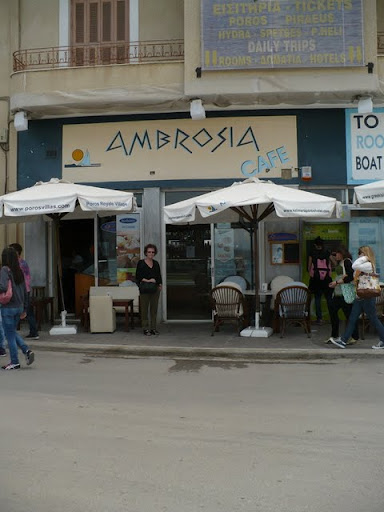 We strolled along the street until the downtown ended, then turned and walked along the waterfront in the other direction. It was lined with boats docked in groups – mid-sized sailboats and yachts, small ferries to take people across the water to the town on the other side – just a fifteen-minute ride, fishing boats, and a cluster of yachts that looked like they might be for rent because they were all made and managed by the same company. Looking at the names on the boats – from the U. S., Sweden, the U.K., South Africa – we felt more directly that we were no longer alone on the vast continents of North and South America. From Greece, you can travel much more directly to China (along the Silk Road), or south to Cape Horn, north and west to the British Isles – you are connected through history and geography much more directly with most of the people of the world than you are in the United States.

Some of the fishing boats were set up for night trawling for squid, with big lights to attract the ten-tentacled creatures. Others had already done their work for the day, bringing in fish for the tavernas spread along the street. A couple of restaurants were grilling octopi in front of their restaurants, hoping that the delicious scents would draw in diners. In the water, little schools of six-inch red fish, and some larger silver fish swam, easy to see in the clear Mediterranean water. 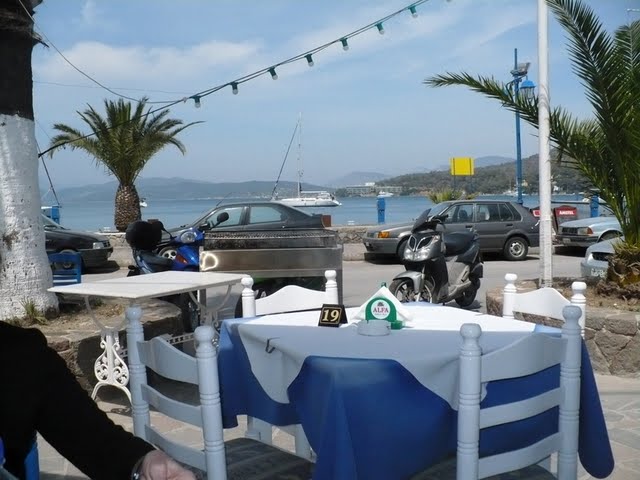 Taverna on the waterfront at Poros.

The boats that were tied up had piles of nets and buoys on the docks, and an occasional fisherman spreading his nets to dry. Others were still out on the water, leaving only covered piles of nets to mark their place on the docks. Most were small, some almost tiny, their decks so crowded with gear that we wondered how the fishermen could move around – and where did they put the fish that they caught?

We walked over to the church to see the eye in a sunburst carved in white marble above the front door, flanked by Alpha and Omega (which represents God as the beginning and end of all things). On the street side of the church was a mosaic depicting the angel announcing to Mary that she can become the mother of God if she chooses. The old woman who cares for the church came over to watch me sketching the eye and said that the name of the church was Panagia Evangelismos, which translates roughly as the Annunciation of Mary. I was hoping that she would invite us in, but she seemed to consider her job done and walked away. 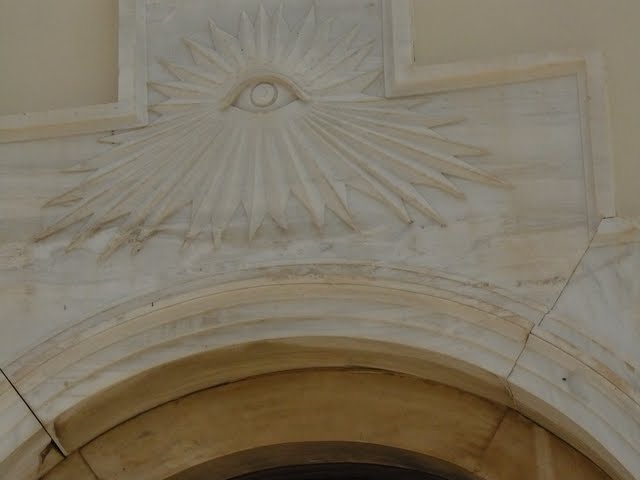 Eye above church door on Poros.

On the land side of the street, the village climbed up steep hillsides. Its architecture mixed the style of Athens – creamy browns and Mediterranean red tile roofs – with the whitewashed stucco and vividly painted blue doors and shutters of the islands. Where the houses ended, scrub bushes, limestone, and occasional clusters of shade trees and evergreens took over, with the exclamation points of cypress trees punctuating the hills. From the Malibu café, hard rock pounded out, a reminder that while the hills and houses were timeless, time was still alive and moving on. 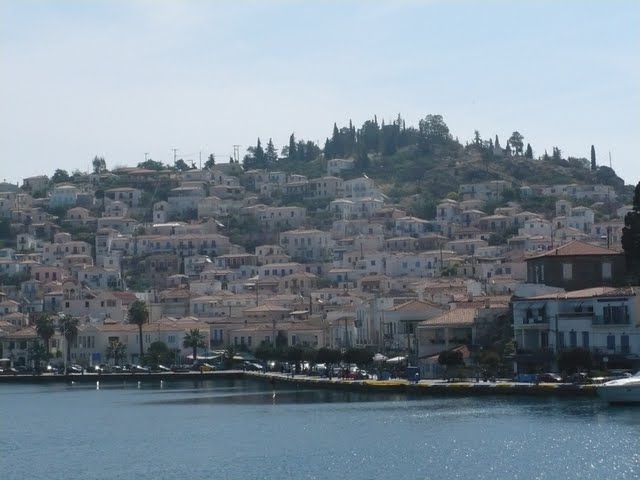 Poros city, above the island harbor.

Anthea has a cold and Jim’s hip was bothering him a bit, so we found a pleasant coffee shop on the waterfront where we could sit and watch the motorcycles buzz by. One of the initial attractions was a sign in the window that said they had waffles were made with Golden Carbon Flour. Small world story – the flour used to be made in Buchanan, Michigan where I grew up. The company still maintains some connection with Buchanan I think; the signs advertising the flour said Buchanan on them. We of course think that there is nothing finer than waffles made with Golden Carbon Flour, so the shop had to be a good one. And when the owner saw Anthea with her computer out, she came out to say that the café had just installed free wireless – so we had a little Internet time as a bonus. 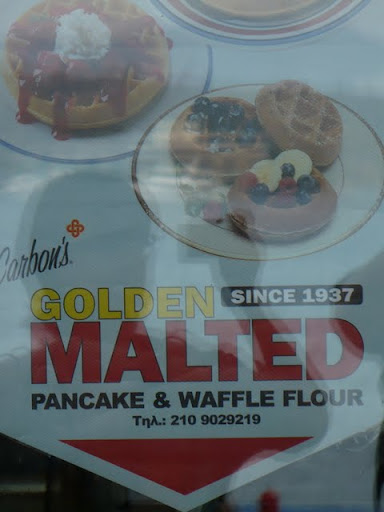 Carbon Golden Malted Pancake and Waffle Flour, made in Buchanan, Michigan; sold on Poros in Greece.

When the ferry back to Piraeus docked, hundreds of people disembarked getting an early start on their island weekend. Only a few passengers got on. From Poros to Aegina, it was calm, the afternoon sun brightening the limestone hills that we passed, and highlighting a occasional ruin or lighthouse. The teen hordes returned at Aegina, doubled in size, we swore. Eight hours roaming around on Aegina didn’t apparently diminish their energy level much at all. “How is that possible?” I asked “Are they the same ones?” Jim and Anthea looked pityingly at me: “Does it matter?” But I verified that they were the same – the girl with the blonde mohawk was on board again.

To add to the chaos, an accordion player walked around playing “Never on Sunday,” which is not the only tune the Greek accordion players know, but the one they always start with. Anthea had gone exploring; Jim was reading and writing; I was writing. He stood 18 inches away from us. We studiously ignored him. Finally he stopped playing and said something ending in “Please.” I said “Ochi” – “no,” and he finally left. Meanwhile Anthea was out on deck taking video of the island scenery – but said she couldn’t do an audio commentary because all of the kids who weren’t inside racketing were out on deck singing Greek camp songs. We agreed that it would make a good sound track for a dystopic post-apocalyptic movie.

After that, a quiet dinner at the Paradisikio taverna near Syntagma was ideal. We walked past the square on the way to the Metro station, an evening concert blasting into the air at much the same volume as the ferry kids. The police with their riot shields stood at the ready on the opposite side of the street. We left them all to their evening’s entertainment, and headed home to start packing for Monday’s departure. Tomorrow we think that we will take the train down the coast in the afternoon and get some beach time, of which Jim and I have had very little. Anthea will join us; she’ll have the morning for writing papers for classes. 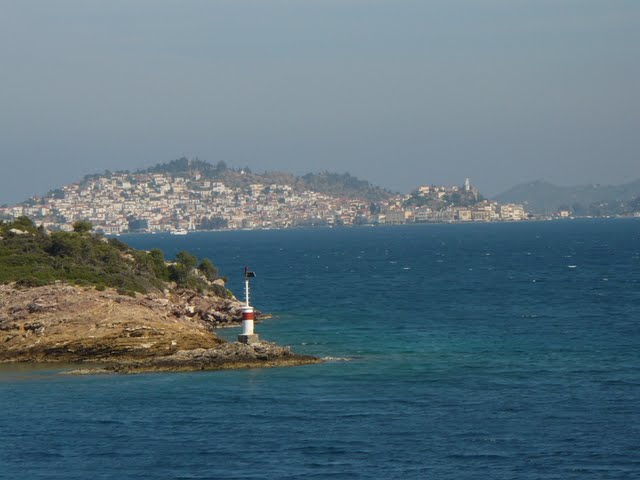 Poros from the ferry.