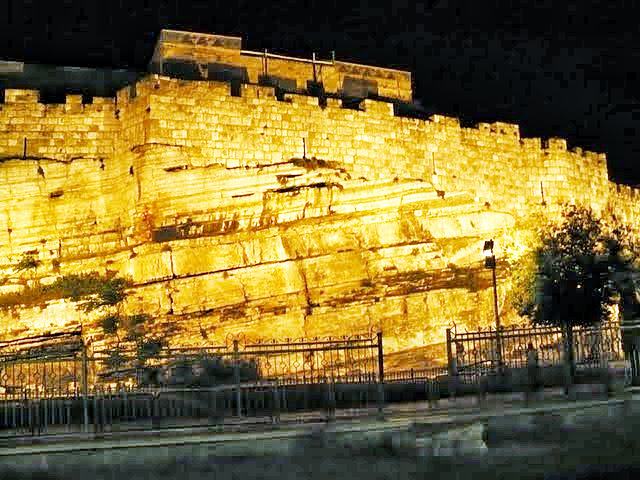 Wall of the Old City of Jerusalem, on Sultan Suleiman Street not far from the Rivoli Hotel.

At 3:45 a.m. today in Athens we met up with a band of pigeons foraging along Ermou Street, a couple of the area dogs (sleep all day, play all night), and handfuls of people leaving the 24/7 McDonald’s on Syntagma Square with their shakes and burgers. By 5:00 we were at the Athens airport, waiting for our Turkish Airways plane to Istanbul and then to Jerusalem. After showing our passports at least a dozen times, going through two major security checks, flying several hours on Turkish Airways, and walking half a mile through the Tel Aviv airport, we found ourselves buying guidebooks, and heading out to the curb to catch a shuttle. 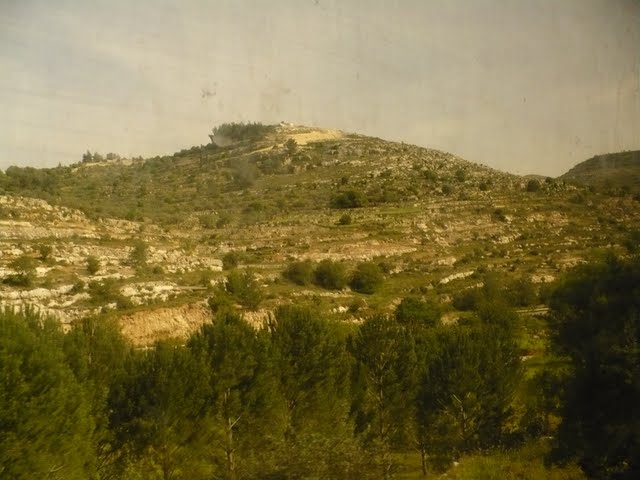 I think of Israel as desert, and many of the hills we drove through were light-colored limestone with low shrubs dotted here and there. But we saw hay fields and orchards, long stretches of Queen Anne’s lace along the road banks, white clover, tall grasses and yellow mustard. In spots, it looked a lot like Central Illinois. Then a few palm trees would rear up alongside the Queen Anne’s Lace, and it would be clear that we were not in Illinois. We saw a single black and white cow standing in a field, and a couple of horses to add to the Illinois illusion. There are long stretches of planted forests and woods – pine trees, cypress, and many others that I didn’t recognize, but overall the land was brown hills, and rocky fields and terraces, where the limestone crop has had the best of it for thousands of years.

An hour and a half shuttle bus ride later, in the company of eight Hasidic Jewish American boys coming back to Jerusalem (for school? not clear) who got dropped off in various little alleys and corners of Jewish Jerusalem we found ourselves at the Hotel Rivoli in the Arab Quarter, directly across from Herod’s Gate in the Old Wall. It’s actually relatively recent in Jerusalem history, built (I think) in the mid-1500s by Sulieman the Magnificent, ruler of the Ottoman Empire. His territory included Greece as well, until their Independence in the 1820s; Palestine remained under Turkish control until the early 1900s. Our three hours in the Istanbul airport, and another several hours reading the Turkish Airlines magazine while flying left me with the impression that Turks are proud of their rule over so much of this area, and celebrate it regularly.

The Hotel Rivoli is in a different world, the Palestinian District. I booked the hotel because it came with a private bath (it is in our room, but the door doesn’t close, so Jim came up with a way to wedge it closed); Internet in the room (“Yes, sometimes there is Internet in that room, but tomorrow we give you a different room and tonight you use the Internet in the lounge here”); and basics like heat (“Oh, this is summer. We don’t heat in the summer. There are extra blankets in the room. You understand of course.” – There are blankets – a vibrating purple polyester; and it may be warm in the day but gets down to the 40s at night. I will not feel very understanding in the morning if the room is 60 degrees.) We asked for a dinner recommendation and he suggested shwarma (grilled meat, more or less, made into a sandwich). “Oh, the lady is vegetarian. Oh, then, bread and water.” He beamed. “They will give you bread and water. Maybe tomato.”

We walked a few blocks looking for places to eat and finding shoe shops, dress shops, produce markets, drugstores, sunglasses – all much smaller than their Athens cousins, and spilling out into the street much more haphazardly. The streets are crowded  – many  small children between about four and ten; women – some with children, some without – buying produce from other women sitting on the sidewalk with produce spread out around them – open bags of small nectarines, fat dark golden raisins, small zucchini, stacks of fresh grape leaves, bunches of flat-leaved parsley, and a number of fruits and vegetables that I don’t even recognize from reading. We ate at a hole in the wall “baguette shop” that gave Jim a Greek salad and a 12″ baguette, and me french fries and a 6″ baguette with four or five tomato slices and a few swipes of olive oil. We were hungry. We ate most of it and appreciated it, and looked for other places on the way home.

We crossed a main road to go along by the Old Wall – no stop lights, but at crosswalks all of the drivers actually stop for pedestrians – the exact opposite of Athens, where being in a crosswalk just means that the drivers can take better aim. Then we walked down into Herod’s Gate through the Old Wall, and just as it has for thousands of years, it housed a produce stand and a watchmaker, and a couple of other little businesses. That led into the Old City, which we decided to save for tomorrow. Across from the Damascus Gate, a 10-year-old boy minded a cart that sent up the smoke of grilling meat – he set up in a median between two parts of the main road. The world passed by – a very few Hasidic Jews, some nuns garbed in blue and white, a tall priest in a cream habit with black (not a Dominican), tourists from everywhere, the Arab women with their black high-necked to shoe-top dresses/coats and head coverings – and more. We saw a couple of soldiers standing guard at Herod’s Gate, and a policeman or two – nothing like the numbers in Athens.

Jerusalem is built on hills like Athens, and there are stairs everywhere. The hotel had an elevator at one time; it is closed off now, so we climb two steep sets of steps to our room. Luckily, we have been in training in Athens. A cousin asked if we were doing this because we liked walking or because transportation was too expensive. We do like the walking (and have not worn out any shoes yet). In Athens, the buses and Metro are inexpensive, but for a couple of miles, not convenient. We don’t know about Jerusalem yet, but having spent some time in the traffic this afternoon, my guess is that walking will be considerably more useful here too.

At about 7:20 we were back in our room. I was looking out the back window at the sun setting pink and purple, and at an abandoned bird’s nest built on the wide sill between the screen and the shutter that hasn’t opened in the last thirty or forty years, and heard the evening call to prayer. It started very close by, and then moved away, finally dying out five minutes later. In Athens it would have been church bells, and perhaps in parts of this city, the church bells count out the hours also. But here, I think we will hear more of the call to prayer. Somewhat later a siren went on for five minutes – perhaps this has to do with our proximity to the police station. And now, at 9:20 p.m., someone is hammering vigorously at a project that didn’t get done during the day.

Looking at the map, it appears that we are steps from a hospital and a police station and very near half a dozen other things to see. But we will save those for tomorrow. We’ve been up since about 2:00 a.m. and need to get some sleep to strengthen us for tomorrow’s explorations.