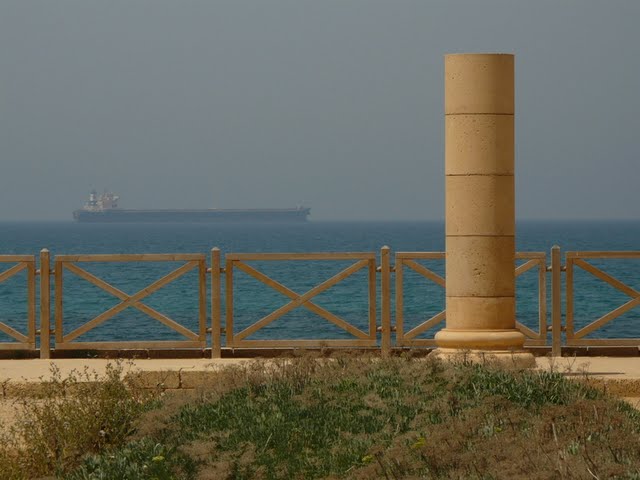 Oil tanker anchored in the Mediterranean off the coast at Caesarea, with Roman column in foreground, and haze from a Sahara sandstorm.

Quite a day. Up at 5:00 a.m. (okay, Teri was up at 4:30 a.m.) and on the way to the Jerusalem train station by 6:30 in a taxi that the manager of the Rivoli Hotel rounded up for us. It cost us 70 shekels (shekels are worth about $.32). Than we got two tickets to Caesarea for 76 shekels each. The train left the station around 7:40 am and we were rolling through a pleasant valley of trees on terraced hills, some shrubs and dry grass. The stream bed running alongside the tracks at the bottom of the valley was dry as a bone, but its well-scoured rocks suggested it runs swiftly with water at least part of the year.

There isn’t a lot of habitation west of Jerusalem. The dry, green, brown, and rocky slopes suggest the American southwest. And what is more appropriate for the west than a train trip. It took us almost an hour and a half to get to the main train station in Tel Aviv, and the last half hour was out of the wilderness and passing through civilization. Tel Aviv is a modern city with freeways, lots of high rises, an IKEA and all the trappings of western civilization we have come to know and love in the US. 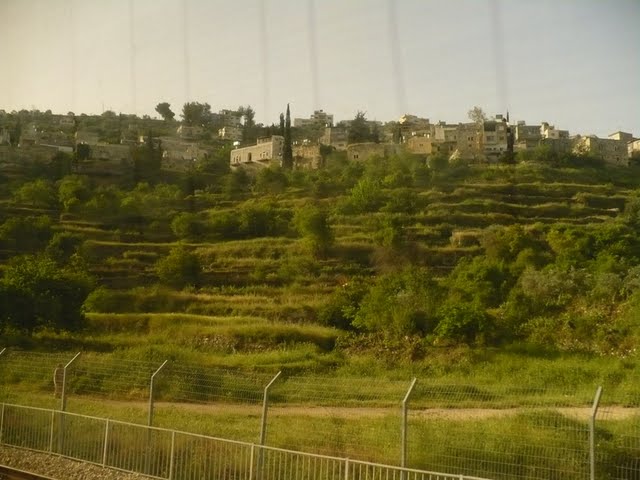 Israel countryside between Jerusalem and Tel Aviv, from the train.

We had to change trains in Tel Aviv to get to Caesarea, which took another hour. Binyamini is the end of the line. Everyone off! A cab took us the last few kilometres to the National Park at Caesarea, which is an archaeological site featuring ruins from the time of Herod onward. There are the remains of a palace that Herod built, and further along, a reconstructed amphitheatre on the site of Herod’s amphitheatre. There is a beach that is littered with small shells, a few of which ended up in our pockets. 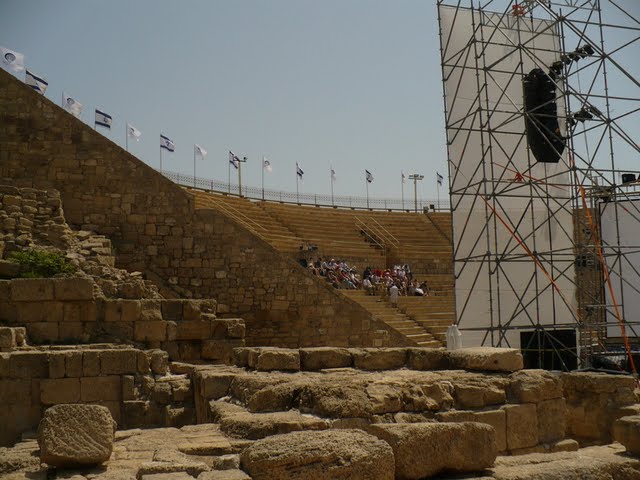 On the horizon was a huge ship, probably an oil tanker, and off the in distance to the south, several very tall smokestacks and a long pier, which was probably there for the oil tankers –  industrial features that were not in evidence forty years ago when I first set foot on this particular beach. In fact, almost none of the ruins, with the exception of the palace, had been unearthed then. In the place of a half dozen up-scale restaurants, and an equal number of antique and jewelry stores, equally up-scale, there had been only a patch of grass and palm trees, with dirt paths, and areas to camp. Once again, evidence that the world had marched on without me. There hadn’t been a fee then either. In 2010, it cost us each $10 to get in. That price included a video portraying the history of Caesarea, but we passed on that, wandering among the various ruins instead. 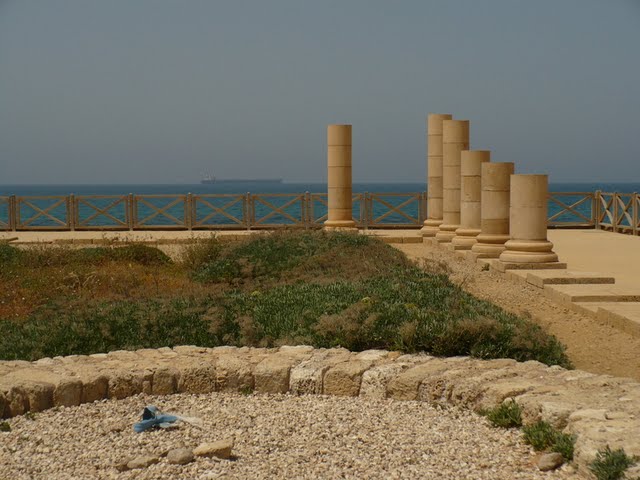 After a few hours we were feeling the sun and heat; we felt like we had seen the best the park had to offer and began our trip home.

The attendant at the park gate called a cab for us which took us back to the train station. We arrived minutes before a train arrived to get us to Tel Aviv, and our return trip was a comfortable, scenic and pleasant as the morning trip had been. The Israeli trains are new, smooth riding, comfortable and run on time, as near as we can tell. Not all the information we needed was in English and we were forced to confirm from other passengers whether we were on the right train and getting off on the right stop. But they were very patient with us, and steered us right. We made it to Jerusalem by 4:30 and caught a taxi home. A taxi that charged us only half of what the morning driver charged us, by the way. I know I am being taken advantage of pretty regularly here. And it isn’t for huge amounts. And we do get what we need. And everyone is very friendly as they pocket our shekels. But it is tiring sometimes. Not that taxi drivers, and other purveyors are necessarily any better.

I half-way woke at 2:30 a.m. and lay there wondering where I was and how I got there and how I would get back. Slowly I worked my way back – Hotel Rivoli in Jerusalem. Took a bus from the airport to get here. Took a plane from Istanbul, and before that, a plane from Athens to Istanbul. Athens – got there from Newark, via Milan. OK. And got to Newark from Anchorage via Seattle. And Meagan is taking care of the house in Anchorage. OK. So there was an identifiable trail of connections to show that I was indeed Teri Carns, and had gotten to the Hotel Rivoli by a route that didn’t involve magic of any sort, pharmaceutical or otherwise. Reassuring, but still left me feeling disoriented.

Jim has described the day’s events. He didn’t mention the wildlife: one weasel – long, low, and light desert brown – running across the road as we approached the ruins. A pair of storks on a piece of the breakwater a hundred yards from shore. Some of the same long-legged black ants (like they’re running around on stilts) that we saw near the ocean on Aegina. Another pair of storks sighted from the plane on the way home. And more of the crow-family birds we saw in Greece, who turn out to my delight (having never seen one, but having read about them for most of my life) to be jackdaws. 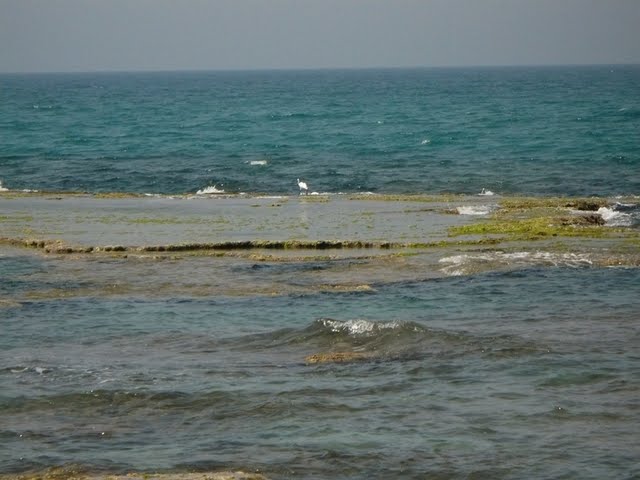 The humans for the day included the ticket seller and the station master at the main train station in Jerusalem, both of whom knew exactly as much about the train schedules for Caesarea as the Palestinians in our area. After taking the trip, I understand why the Palestinians don’t know about it – there would not be any reason for most of them to go to Caesarea, and no reason to take the train. The stationmaster and ticketseller are less understandable. Nonetheless, once we got to Tel Aviv, a very helpful girl who was a train employee got us on the right platform at the right time.

The trip itself had all of the advantages of train travel – more comfortable than a bus or plane, better scenery than bus, plane or car (because the trains typically don’t take up nearly as much land as the freeways on which the cars and buses travel, they are closer to the scenery), no traffic jams on the runways or freeways to hold them up, and so forth. Leaving Jerusalem, the first half of the trip was, as Jim said, through a gorge with limestone outcroppings, pine and eucalyptus forests, wild roses, Queen Anne’s Lace and other wildflowers, and little sign of civilization anywhere. Add some blue sky and sunshine (a predictable part of the recipe for every day here), and a cup of coffee, and there’s little else to ask for. The land settled out into slightly rolling fields, a landscape that reminded me of northern Illinois at its best. The herd of cows, and an occasional horse completed the illusion. And even when the urban areas showed up, much of the land along the tracks was in fields – hay, a two-foot high green plant that I didn’t recognize, olive and orange orchards, and even palm tree orchards, sometimes with big prickly pear cacti for hedgerows. 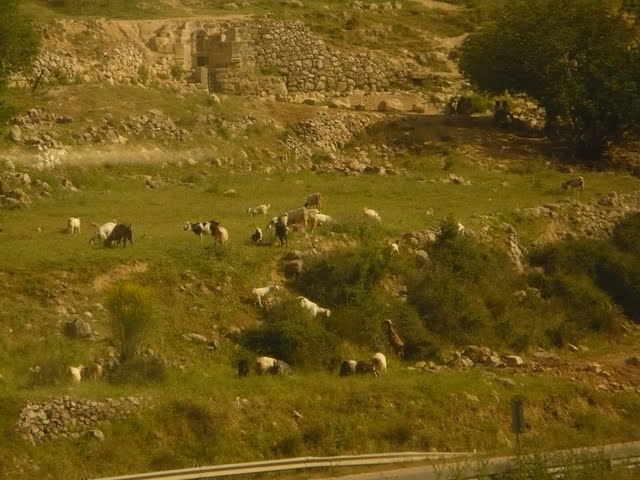 Sheep grazing in the hilly areas along the train tracks.

We ate our lunch at the “palm court” – that is, shaded by a tall palm tree in a park area, with the Mediterranean breeze for company, and a chunk of Roman wall to contemplate while we ate our croissant from the Binyamina train station (the stop for Caesarea) and flatbread fresh from an oven in the Old City. I like the Palm Court at the Plaza Hotel in New York (the children’s story of Eloise takes place there in part, and we ate there on our 1995 trip around the U.S.), but this palm court had a great deal to recommend it. The view out to the ocean was hazy – Anthea mentioned in one of her posts (see below for the links) that a Sahara sand storm is doing its best to make Southern Europe not feel that it’s been left out by the dust from the Iceland volcano. I couldn’t find any information about it on the Internet, but Anchorage periodically gets dust from storms in western China and Mongolia, so it seemed possible.

The Roman ruins looked to my very untrained eye a lot like the Byzantine ruins – blocks of stone, a browner/redder shade than the honey color of the stones of and on which Jerusalem is built – stacked and cut and held together in buildings for which one of the main questions is: “How on earth did they do all that?” Although the site, like everywhere else around here is ruins that were built from other ruins and served in their turn as the building blocks for new developers, it lay fallow from the late 1200s when the invading Turks destroyed what the Crusaders had built, until the mid-1800s when the Turks settled a small group of farmers from Bosnia there. The Renaissance passed Caesarea by, as did the age of explorations, the age of reason, the French and American revolutions, and a great deal else. The result has been that the ruins were relatively easy to get at. Now besides the ruins that are a national park, there is the town itself which is characterized as middle class and up, a small community of well-off people. 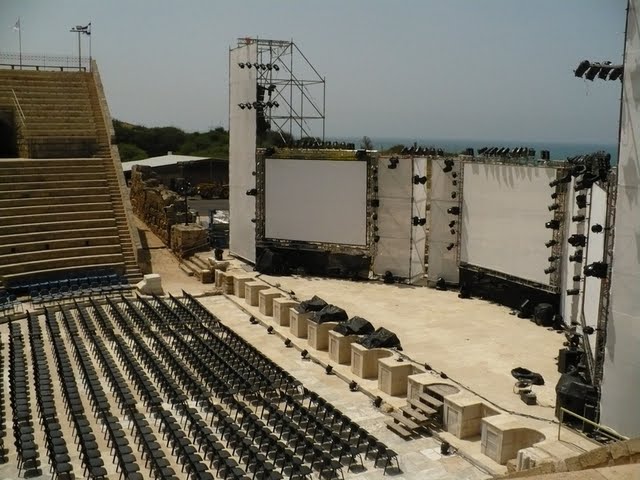 The stage of the Roman amphitheatre at Caesarea, now used for open-air rock concerts and other events.

We dined again at the Alhambra Hotel in the Palestinian district of Jerusalem, a few blocks from the Rivoli. The chef sent out a complimentary bruschetta sort of appetizer, prepared a large plate of cauliflower, peppers, zucchini and a few potatoes sauteed in olive oil, sent a complimentary side of fresh potato chips, and brought two bowls of fruit (complimentary) for dessert. I felt well- fed (read, stuffed) for the first time on the trip. It was delicious. We highly recommend it.