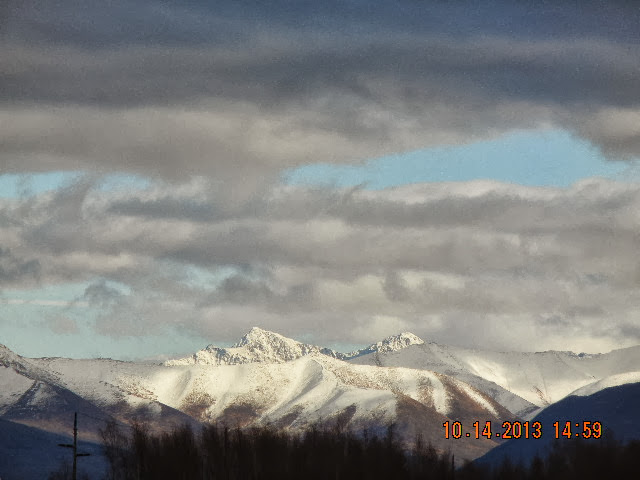 Anchorage, a brief patch of blue sky on October 14.
We left rainy windy Anchorage on October 15. At 8:00 p.m., the power blew out at our house, so we headed for the warm, well-lit airport many hours before our 2:30 a.m. flight to San Francisco. When we arrived in the Bay area (via Portland) at 9:30 a.m., we stepped out into sunshine, fresh breezes, palm trees, and the golden-brown hills of California autumn. Anthea met us at the S.F. airport; we rented our car; and set out for Menlo Park, home of Jim’s generous cousin.
The rest of that day, fighting hard against enormous sleepiness, we spent stocking up on road-trip supplies at Trader Joe’s, exploring Menlo Park and Palo Alto, and getting take-out Greek food  from Evvia in Palo Alto for a late dinner at the cousins’ home.
Palo Alto palm tree in the afternoon sun. 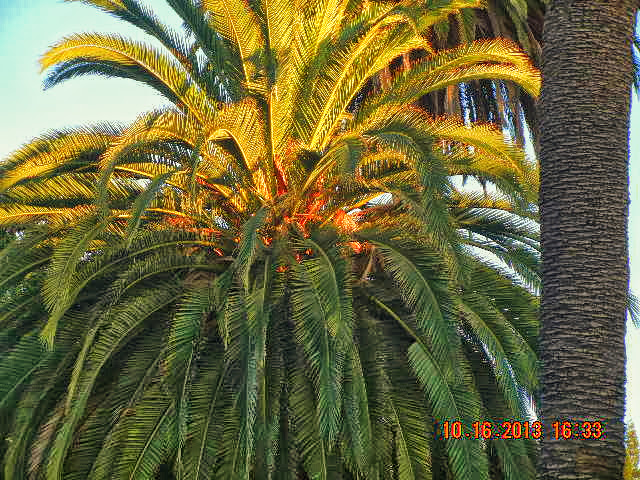 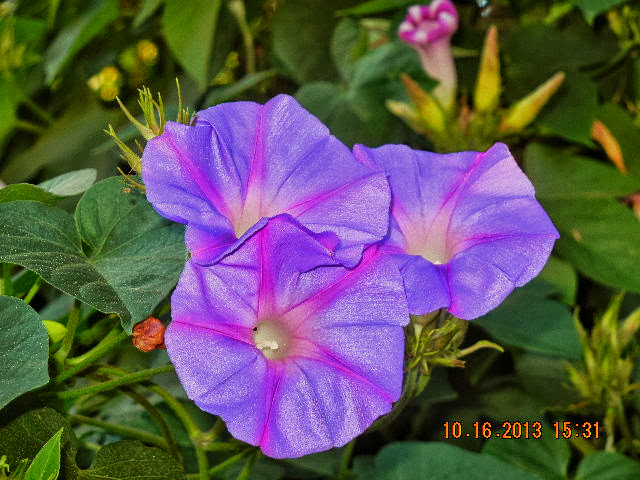 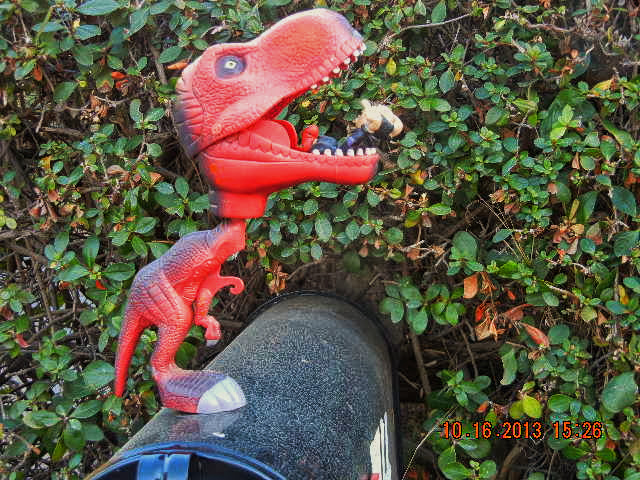 Thursday was our day to see the city.  Our strategy for getting there from Menlo Park was a little complicated (no fun, otherwise, right?). Anthea took the train in, and walked up Market Street to meet a college friend for lunch. Jim and I drove to Vallejo where we had rented a hotel for the night to be closer to our weekend destination in Reno, parked the car, took the ferry to the city and met Anthea after lunch.
Great idea all the way around, but driving in the Bay area is still driving in the Bay area. Luckily we went up the east side of the Bay, and were going north. But even at that, the best of all circumstances for morning driving, it was half an hour more than Google maps optimistically promised. We arrived at the ferry terminal at 9:58, for a 10:00 ferry. The ticket seller, watching us running up to the window, panting and frazzled said, “Don’t worry, I called them and told them to hold the ferry for you.” And they did.
The ferries to and from Vallejo are fast, clean, comfortable, and scenic. The sea air is exhilarating and we saw a hawk, a seal, and our fair share of gulls. Hard to find a pleasanter way to spend an hour being transported, especially after two hours on the freeways.
Vallejo in the distance. The sky was cloudless, with a brown haze smothering the horizon. The air is better than it was thirty or forty years ago, but it’s not as clean as Anchorage. 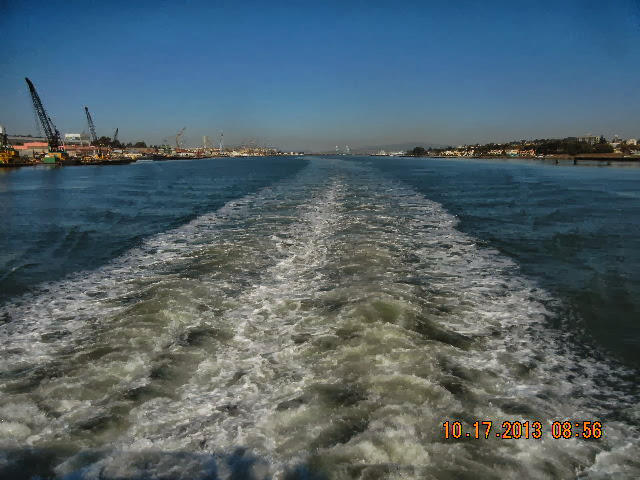 At the Ferry Terminal Market Building, pigeons waiting for someone to bring them lunch. 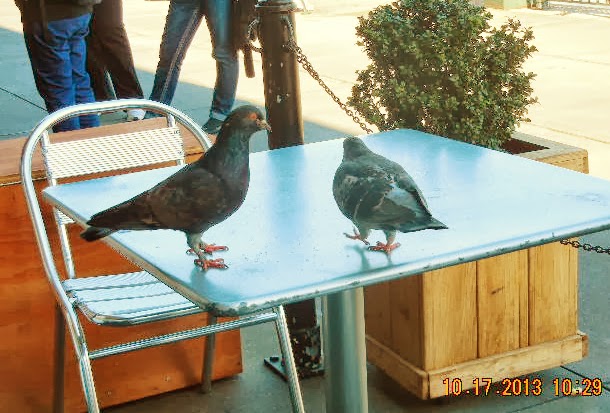 The Navy ship, Carl Brashear, coming into the harbor under the Bay Bridge. It carries cargo; was named after the first African-American to become a Master Diver. The Bay and the docks are known for their tourist appeal, but are working docks — besides the Navy ship, we saw container ships, ferries, tour boats and sailboats. 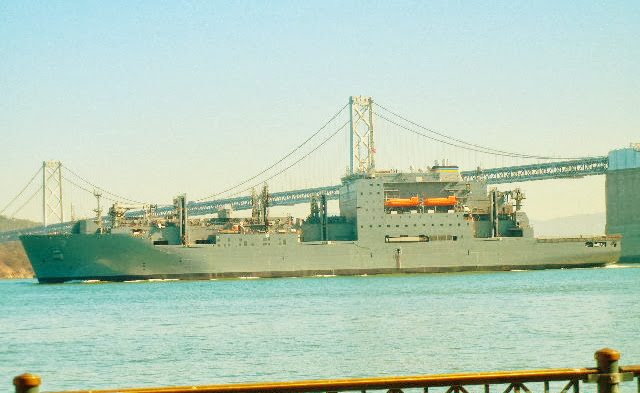 The cormorants stake claim to their part of the bay. 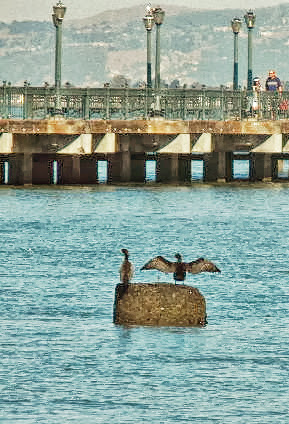 People along the Embarcadero. The day was too nice to spend much of it inside, so we walked along the waterfront for a couple of hours. Here were a few of the people and sights:
Denizens of the Alcatraz Landing Cafe. 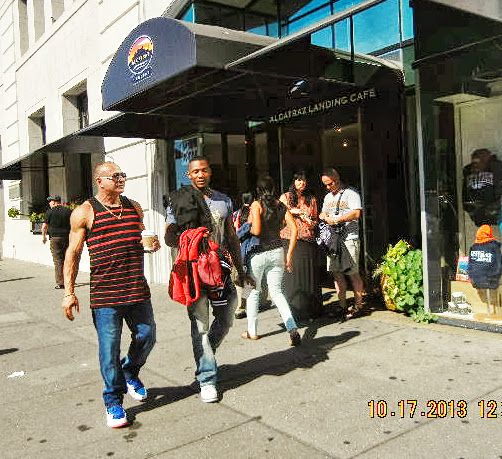 Protection from the hot sun (something you didn’t see much of in Anchorage during the past couple of months) — hats, umbrellas. Note the heavy coats tied around the waists. We saw plenty of people wearing coats, down vests, hats, scarves, boots — looking like Anchorage-ites in November. It was at least 75 degrees, and although it was cooler in the shade with a breeze, these warmly-dressed people were in the full baking sun. 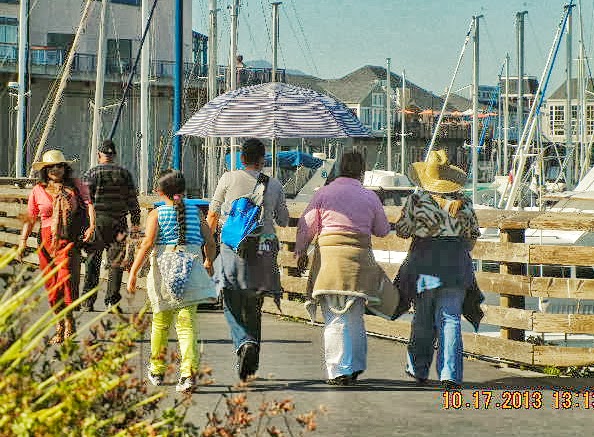 Sunning themselves, along the Embarcadero —  not over-dressed for the afternoon. 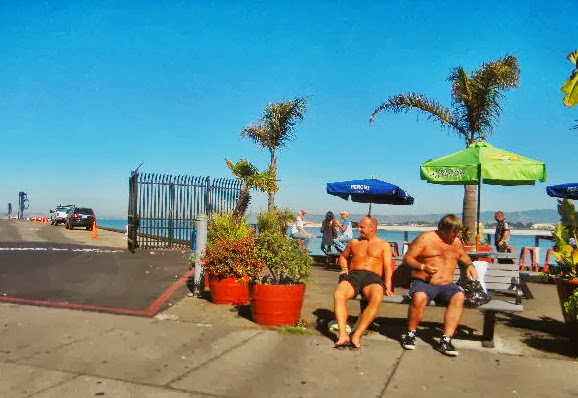 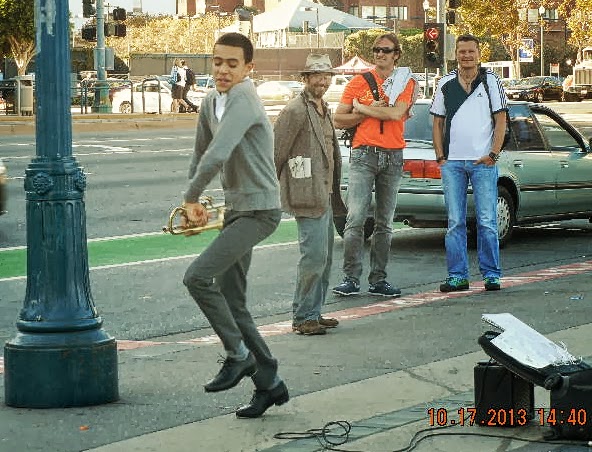 Waiting for the actors to show up? The cameraman is ignoring the characters seated  behind him on the monument near the Ferry Market Building. 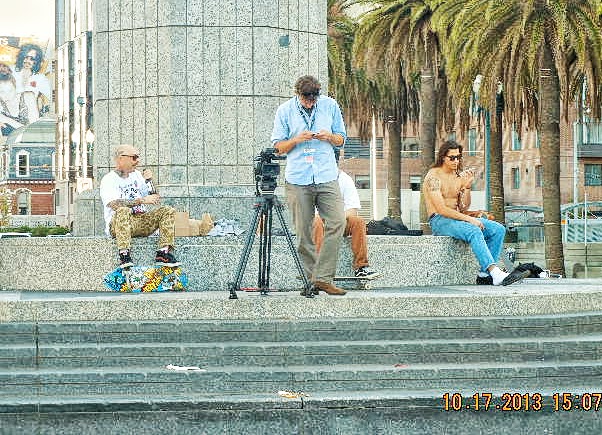 Anthea and Jim along the Embarcadero. Jim’s shirt was combining with the camera to create a nice interference pattern. 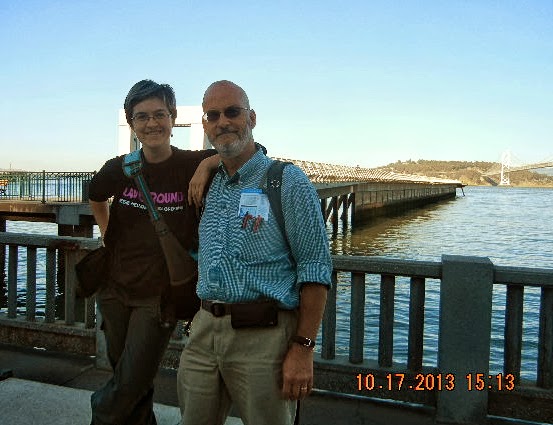 A rush-hour demonstration for better immigration policies, turning off Embarcadero to go down Market Street. 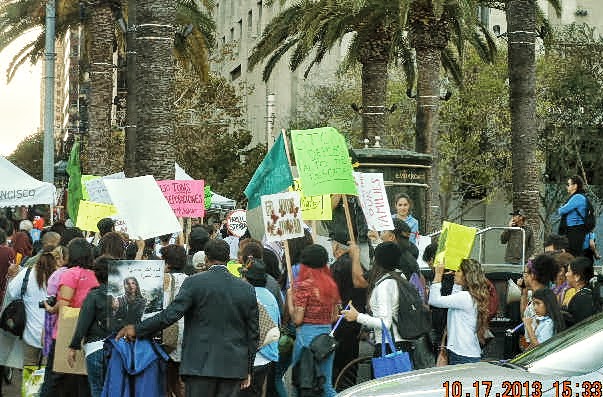 From the Ferry Market — dahlias. 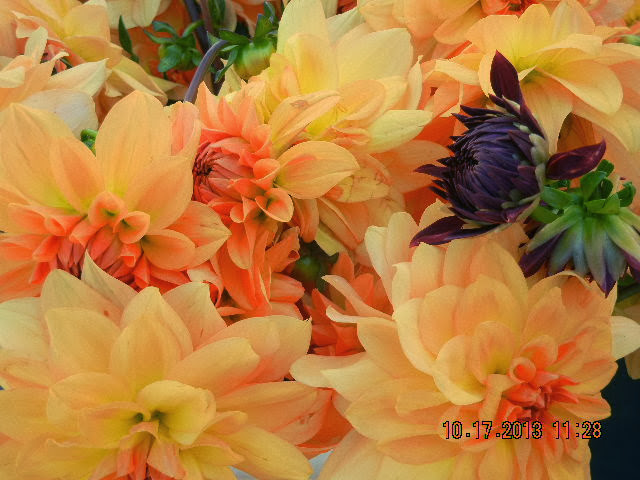 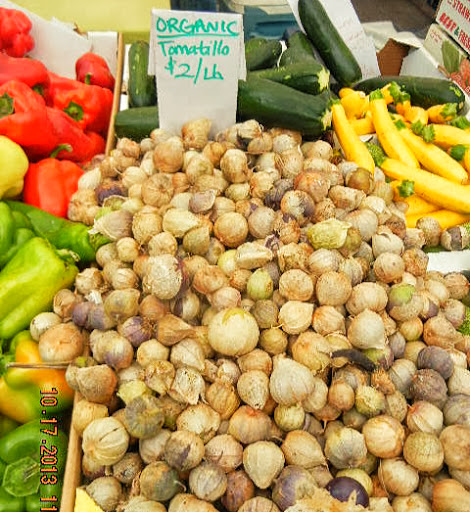 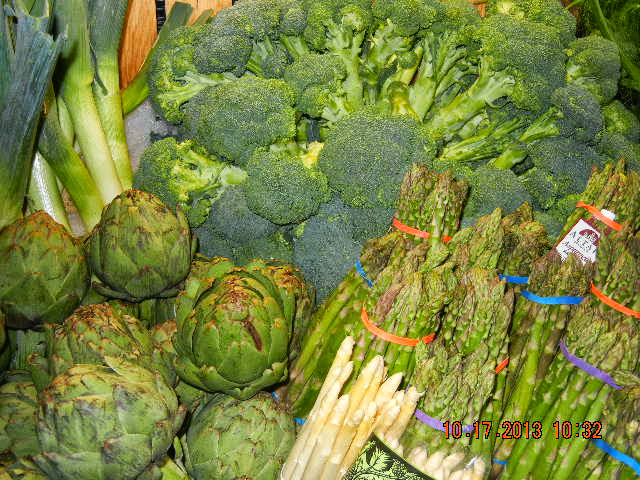 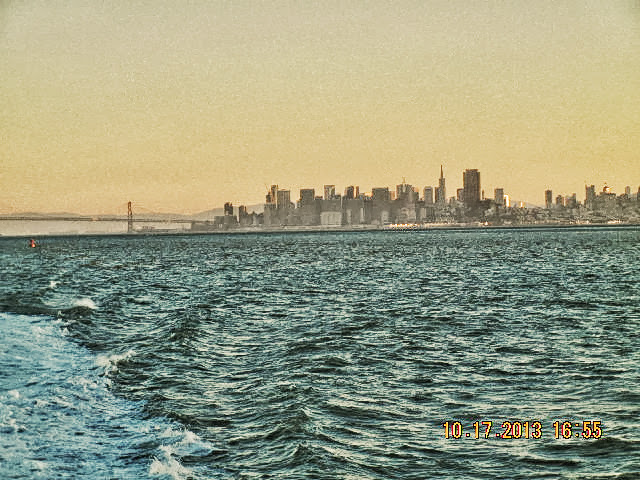 Sunset over Marin County from the ferry. 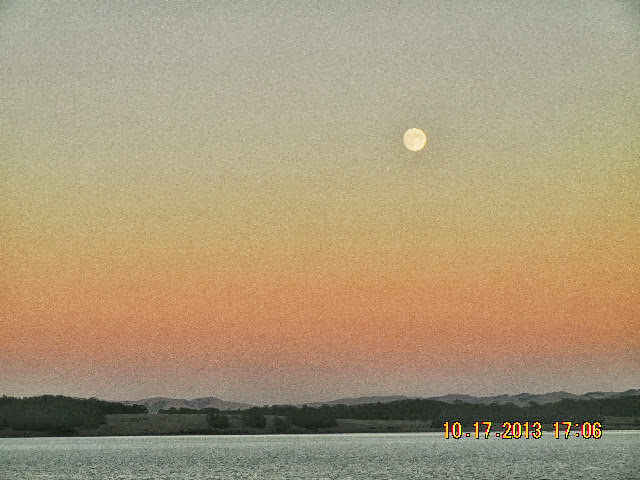