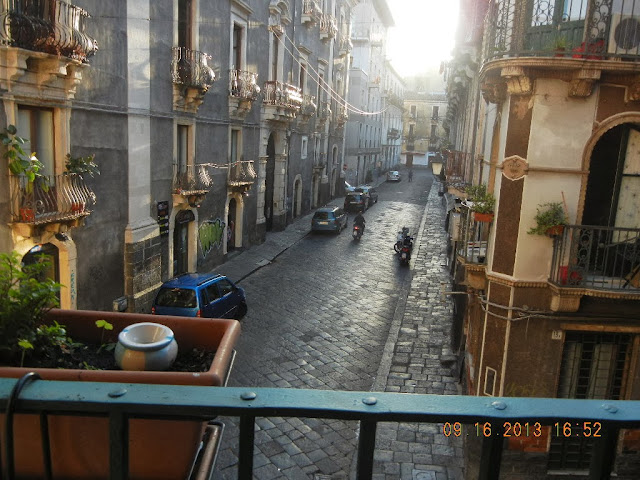 View from our balcony at the Hotel Trieste, looking west, about 5:00 p.m., Catania, Sicily.I had never heard of Catania before deciding to visit Sicily with my husband, daughter, sister and her husband. We flew from Rome, mid-September, to this city of 400,000 people (center of an area of 800,000). Our home-town Anchorage, has about 325,000, and the whole state of Alaska has just over 700,000. And yet, we’d never heard of Catania, although the people there had certainly heard of Alaska.

Another difference — Catania’s been there since about 900 B.C.E., making it close to 3,000 years old. Although people are likely to have been living in the Anchorage area for that long, the first permanent settlement was in 1915, not even 100 years ago. 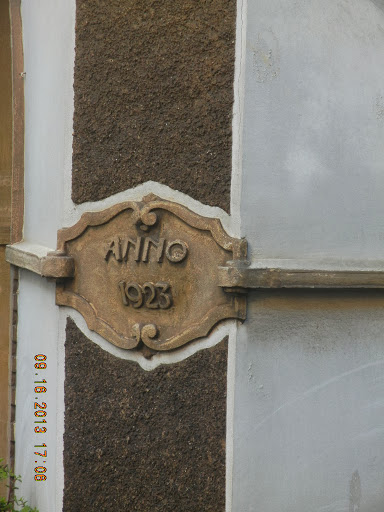 Plaque on a building across the street from the Hotel Trieste. This suggests that the Trieste is probably of a similar age, and the whole street has existed much longer than most of the buildings in Anchorage. 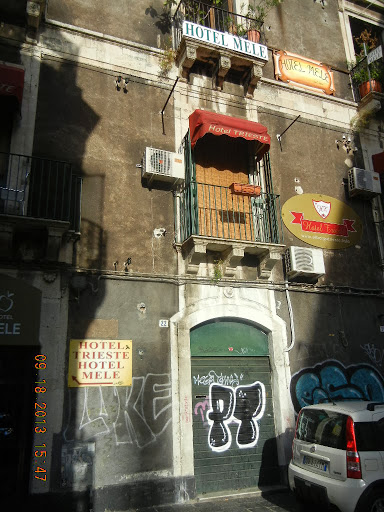 View of the hotel from the street. Note the graffiti, ubiquitous in Catania, as it was in Greece and much of northern Spain. One awning says “Hotel Trieste,” and the one above it says “Hotel Mele.” The sign at street level has both names. That garage door will be rolled up at night, and tables and chairs for a bar will come out onto the street. 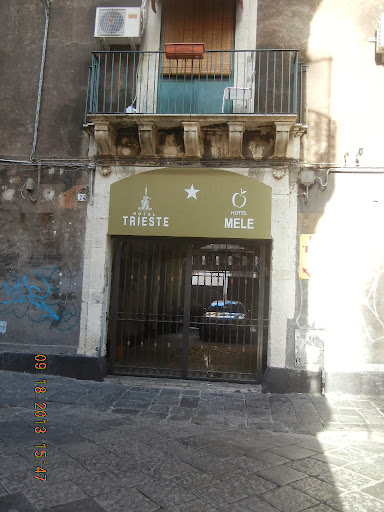 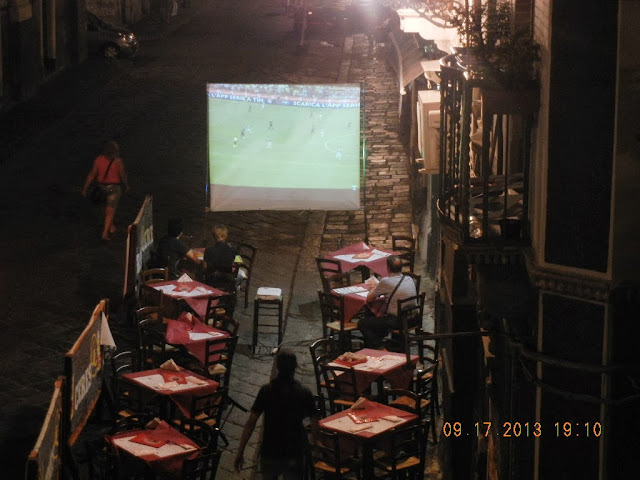 The quiet street comes alive at dusk, with “American bars” up and down its length. By day, when you walk down the street, you see some shop windows, doors to houses, and roll-down metal garage doors, graffitied or plain. At night the doors roll up, the bar owners carry out tables, chairs, movie screens/monster TVs, and sofas. Italian bars are usually open all day, selling coffee, liquor, beer, and food. American bars exist for the sole purpose of drinking, watching sports (or maybe Simpsons, while waiting for soccer), and socializing; they never open until dusk. 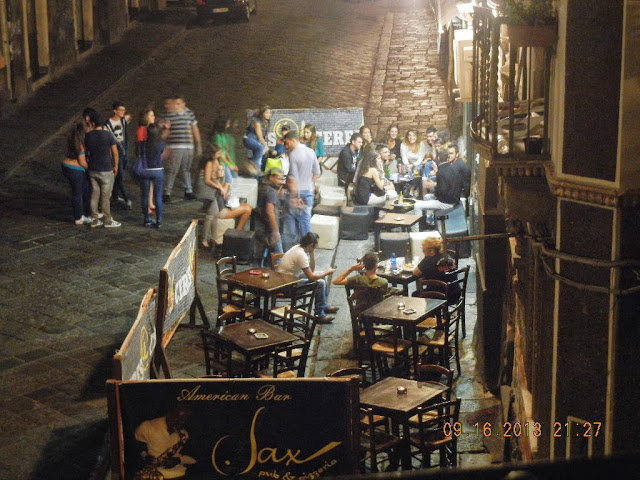 The street in front of Hotel Trieste at 10:30 p.m. [This was a night with no soccer game, so no TV out front.]

The “hotel,” like a number of places we’ve stayed in Spain and Italy, is just seven rooms on one floor of a building. At least one other hotel, the Mele, shares the building, as do a number of apartments. The owners, Alice Bianchi and Guiseppe Koenraadt, would like to expand soon. They found us a guide for Mt. Aetna, recommended bakeries, served us a local liqueur on our last evening, and took care of us in every way. One could not ask for more gracious hosts, better English, or more knowledgeable guides.

The local liqueur, Amaro dell’ Etna [http://en.wikipedia.org/wiki/Amaro_(liqueur)], that Guiseppe and Alice served us on our last evening at the Trieste. Wikipedia describes amaros (amaro is Italian for “bitter”) as liqueurs made with herbs, bark, roots, flowers, and other ingredients. We can tell you that it was sweet, powerful, and delicious. 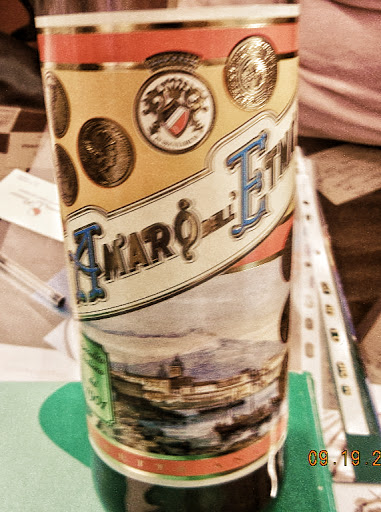 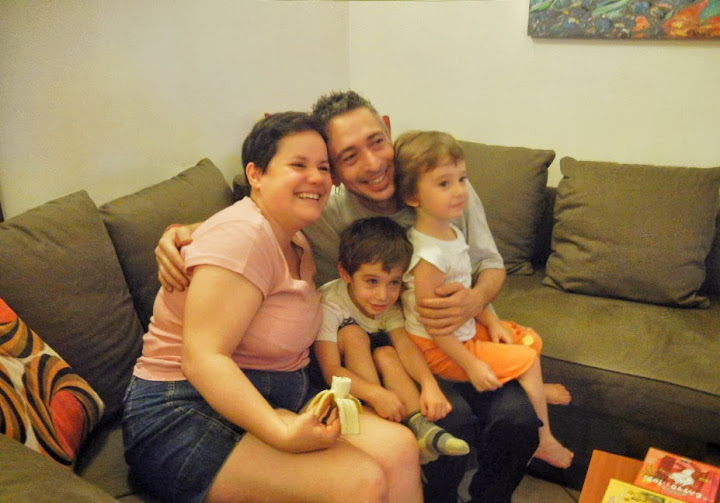 On the ground floor of the hotel, inside the tall iron gate, is a paved area or parking. This is one of the cats that made their home there, under or atop the cars. 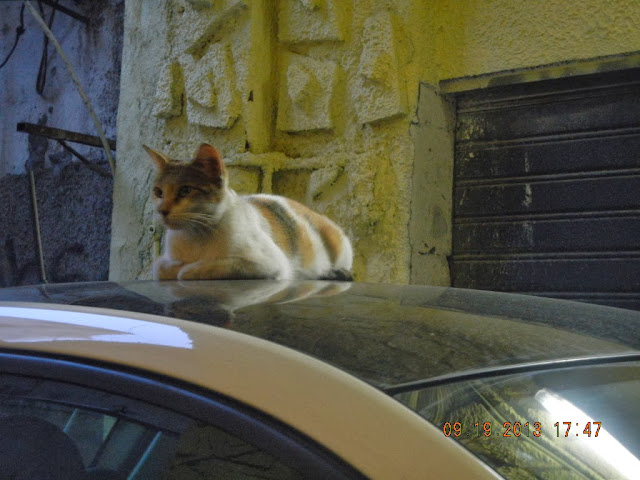