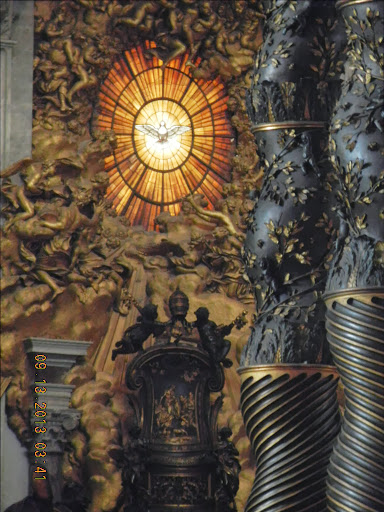 Bernini’s altarpiece, and his “Dove” alabaster window in St. Peter’s Basilica, Rome.
Guess the eternal city is a good description for the day, because we spent a sizable chunk of it seeing the Vatican Museums and St. Peter’s Basilica. The guidebooks say to allow three hours for this, but I’m here to tell you that it doesn’t even come close. Three days, maybe, but you would undoubtedly get overloaded on the surfeit of art and history far more quickly. Eternity would be sufficient, but by that time, there would be more beautiful things to collect into these museums.
We saw much of it — the ancient Egyptians, and the Roman versions of their mammoth statues; the ancient Greeks and the Roman versions of their exquisite work (the Romans were great copiers, and thus preserved many Greek statues that would have been lost forever); the Roman versions of Roman gods and goddesses and heroes and nobles; and the Christian versions of the ancient Romans’ gods and goddesses, and stories, which they took to be important accounts of Christianity’s roots. [For the record, it wasn’t until the 1600s or so that the Church decided that it was inappropriate to use all of the Greek and Roman stories. Before that, they used the stories as symbols, or allegories, or history, and regularly decorated altars, churches, and tombs with the motifs and characters.]
We saw lots of things that we had studied in art history classes — the writhing Laocoon (which had been written about by the ancient Romans; when it was re-discovered in 1506, the then-Pope identified it as so important that he called in Michelangelo to help restore it, and used it for the start of the Vatican Museums). The Apollo Belvedere was around the corner from Laocoon. A copy of a Greek statue by a Roman artist, it was re-discovered just a few years before the Laocoon, and soon made its way to the Vatican. Michelangelo’s Pieta is in the Basilica itself, and we passed through the Sistine Chapel on the way to the church.
But of the three hours, at least an hour was spent being swept along in slow crowds, unable to escape the clusters of guides and their listeners all linked together by little transmitters set in their ears. In the Tapestries rooms, I began to wonder about fires. Earthquakes. Anything like that. The crowds were not exactly orderly as it was. They were only innocuous because they were attending to the lectures. But give them something to focus on about their immediate welfare, and it would not have been a pretty sight. Paranoid? Yes. I was pleased to be in more open spaces.
We ate a quick lunch at a decidedly touristy, but friendly place near the Vatican, and set out for the subway station to go to the train station to meet Peg and Tom Lazio (one of my sisters and her husband; they also were on the Camino with us for part of the time). When we finally connected with them, about 5:30 p.m. it was at the corner of Via Veneto and Via Lazio; in another half hour, their son and his wife showed up as well, and we all ate an excellent dinner at Antica Enoteca near the Spanish Steps. The son and his wife head back to the U.S. tomorrow, and Peg and Tom will go with us to Sicily next Monday.
Tomorrow we go to Ostia, and tonight, having gotten home late, I will add a few photos, and send this off.
These days, the Vatican Museum has collections of art from all over the world. This is a model of a Chinese dragon racing boat, part of a series of boats from everywhere set along a ramp winding up into the main floors of the museums. We liked the little red things sticking up above the eyes; Regina thinks they are mustaches, and I wonder if they couldn’t be eyebrows. 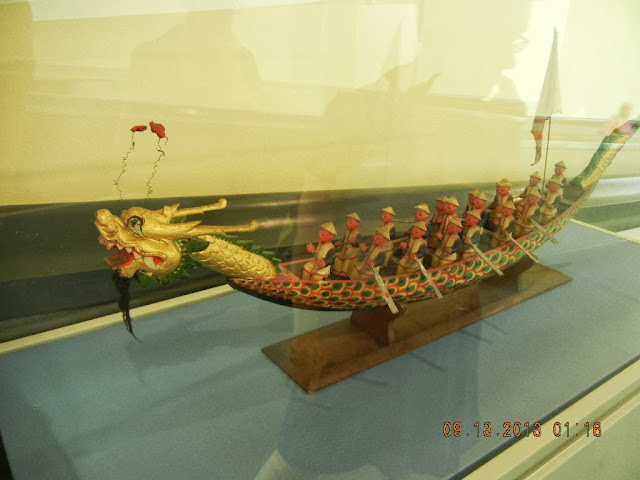 Laocoon (a Trojan priest) and his two sons being strangled by giant snakes sent by Poseidon (in some versions) because Laocoon recognized that the Trojan horse was a ruse, and tried to demonstrate that by striking the horse with his spear. Poseidon (pr Apollo, or Athena in some accounts) who sent the snakes was on the Greek side, and thus wanted to preserve the trick being played on the Trojans. 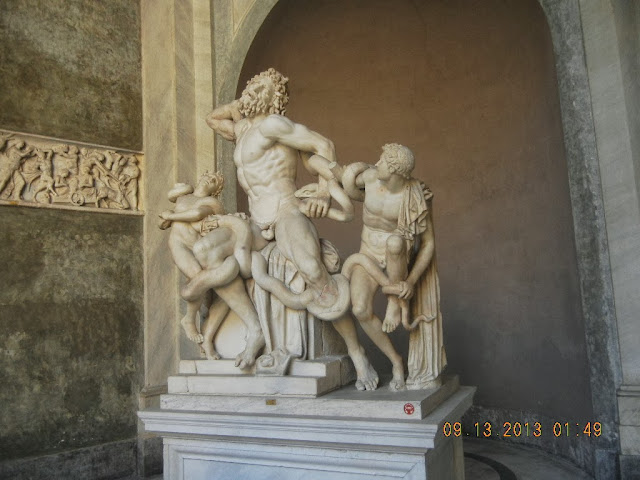 A room full of animal sculptures from different eras, one of two rooms like this. 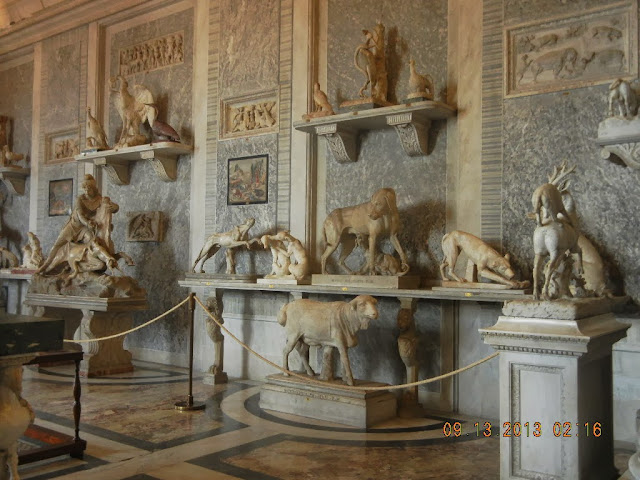 A Roman granite version of an Egyptian sphinx, with a typical crowd in the background. Note the guide’s tall pole with something colorful on the top so that his group can follow him. 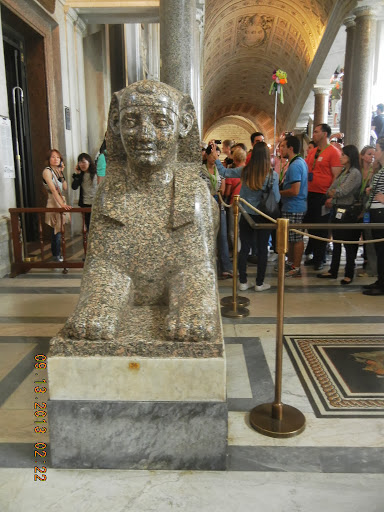 Huge map of Sicily, tapestry? — one of dozens in an endless series of rooms lined on either side with similar maps. 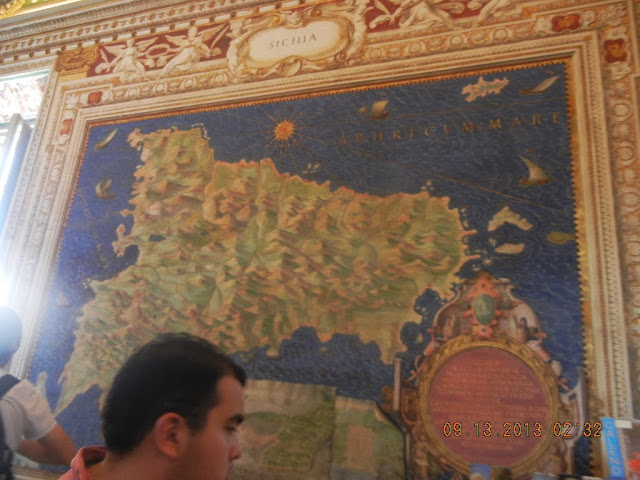 Anthea photographing in St. Peter’s Basilica. No flash was allowed, but we could take photos everywhere except the Sistine Chapel. And that was so amazing, that it would have been impossible to know where to start. 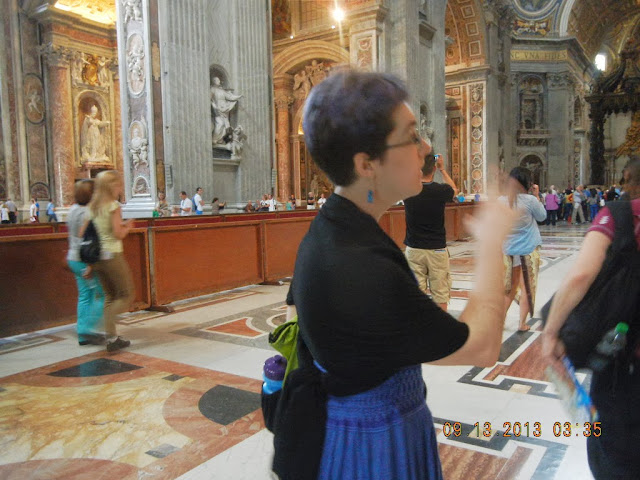 Peg and Tom Lazio, with Via Lazio sign on the building behind them. 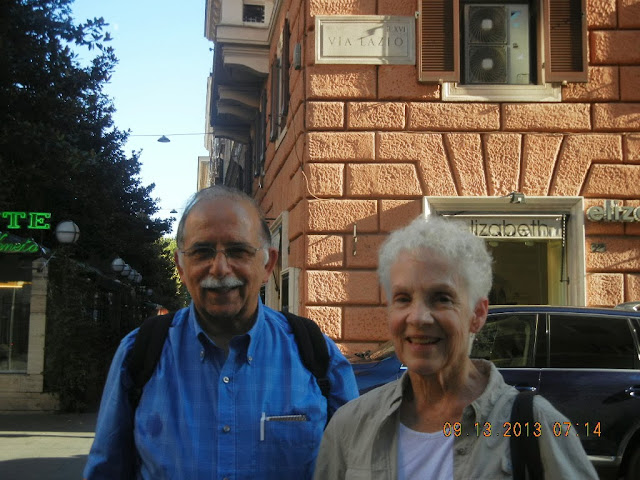 Regina with penguin outside a gelato shop on the Via Veneto. 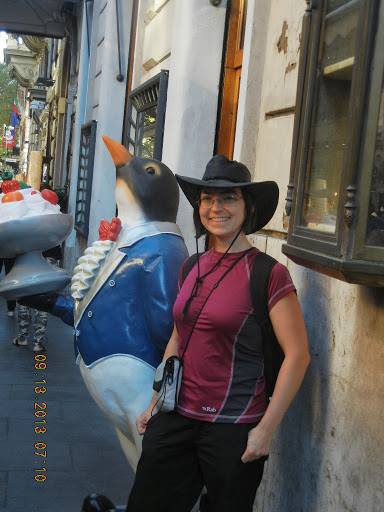 Segways and go-carts in the Borghese Gardens, early evening. 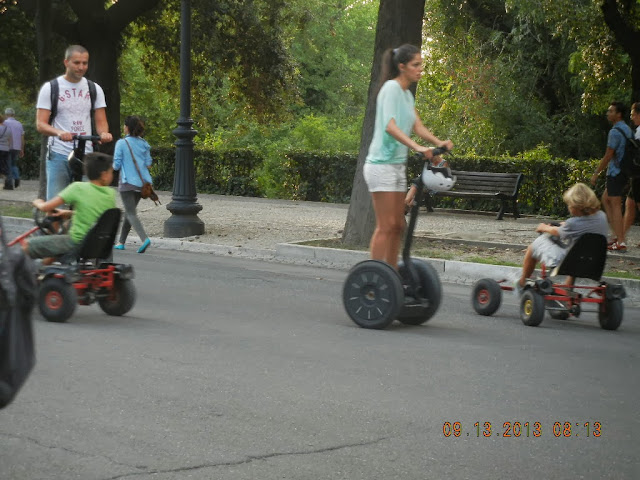 A view of Rome near sunset from the Borghese Gardens. 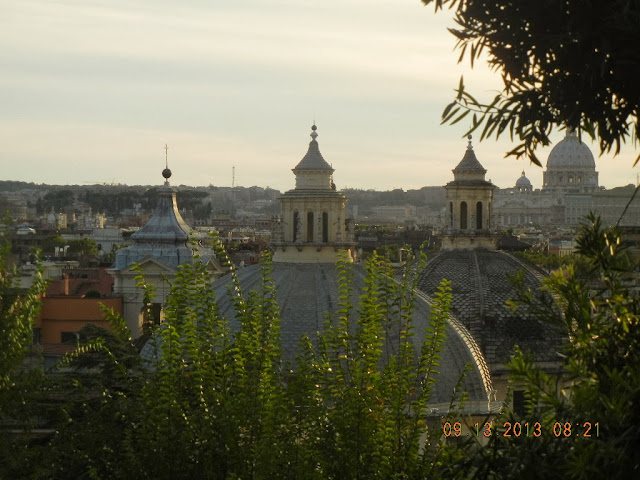 Joe Lazio, his wife Jen, and Jim Carns in the Piazza del Populo below the Borghese Gardens. Joe said that this was along the pilgrims’ way into Rome in medieval and Renaissance days. 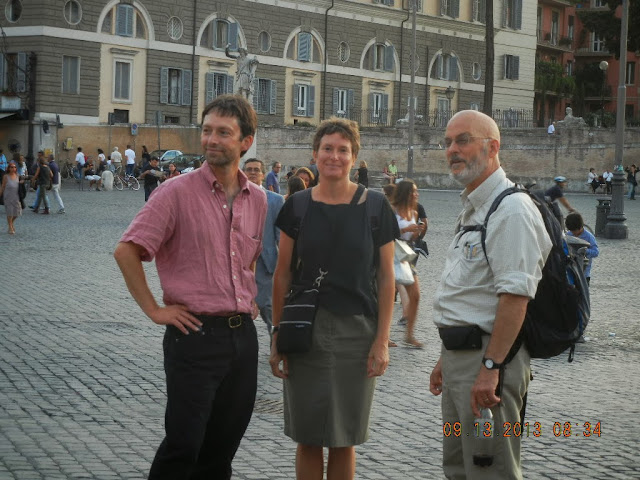 An Italian evening scene, in neighborhoods all over Rome. This tells you that the weather is very pleasant. 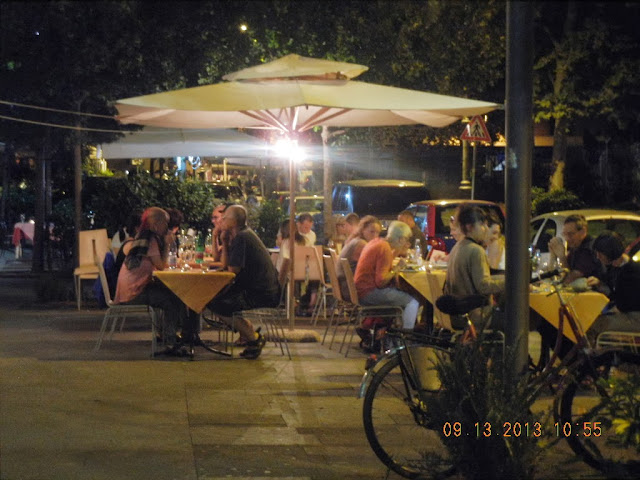