Posted on October 3, 2013 by Road Trip Teri
If you were a Roman in the old days, you would not go to Ostia on a holiday. These days, you might, just to look at what was left of a bustling Roman community. We went to Ostia (means “mouth,” and is located where the Tiber empties into the Mediterranean Sea. In its heyday it was a salt-producing town, and the port of Rome, with 60,000 people. After the fall of Rome, the city lost its importance, and besides that, the Tiber changed course and silt covered over the city. That saved it from the next thousand years of scavenging for brick and stone to use in new churches and government buildings, and preserved the mosaics, the mills, and the monuments.
Ostia is out in the country, with horses grazing alongside the ruins, butterflies, and herbs everywhere underfoot. Overhead, those magnificent pines, the ones that inspired Resphigi’s music, shade the cobbled roads through the old city. Underfoot, their brown needles scent the air with every step, and make your feet slip against the stones. We saw green lizards, each one with enough iridescent bling to sate the glitiziest of tastes. Butterflies and tiny grasshoppers flitted just over the low-growing mint, and in a field next to a white horse, an egret stood watching for lunch. It was peaceful and quiet, the sort of silence that the guys in the Sistine Chapel and St. Peter’s were trying in vain to enforce.
For the afternoon event, we visited the Capuchin Ossuary, hard to describe adequately. It consists of several rooms under a church run by the Capuchin monks (from whence, cappucino, as in the delicious coffee drink). The rooms are dioramas created with the bones of thousands of monks (the bodies dated from about 1530 to 1870). One is called the pelvis room, another the shoulder blade room, and another the skull room. Wikipedia says that there are other ossuaries in Europe where the bones of the dead are displayed as reminders to the living that this is their fate. This, however, is considered the most artistic.
In the evening we dined well at Il Foccacia near the Piazza Navona. The house wine was chianti; the special of the evening was an entree of grilled porcini mushrooms (Regina had that); and they had all sorts of veggies in the various offerings. Afterward we wandered around the Piazza taking photos of fountains, fortune tellers (they don’t like that), vendors, and the half moon in a clear sky.
For gelato, we headed back to our neighborhood favorite, getting there about 10:30 — it was packed. Usually it’s quiet, so we must be getting there earlier than most people. And it was Saturday night, in the mid-70s. The streets, even at 10:30, were filled with everyone — old people, lots of families with toddlers and babies and kids, groups of young people, couples of all ages, clusters of men; clusters of women, vendors. Every cafe had its tables along the streets and sidewalks, and all of them seemed busy. Hard to believe how many there are, crowded with Romans, as well as tourists.
The finale for the evening came as we were walking back to the apartment. Several cops on motorcycles came roaring down the street, blue lights flashing. They were followed by more regular people on motorcycles, and then more and more and more — we estimated between 100 and 150 in all, with a few more cops bringing up the rear.
Random observation: Roman drivers don’t use turn signals. Why would you, when you have no more idea than the driver behind you what you are likely to do next? A turn signal implies more than split-second thought given to your next move, something that rarely occurs as far as we can tell.
Ruins at Ostia. 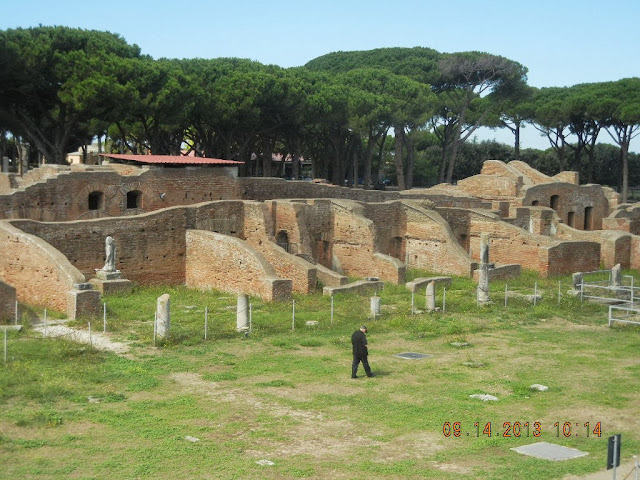 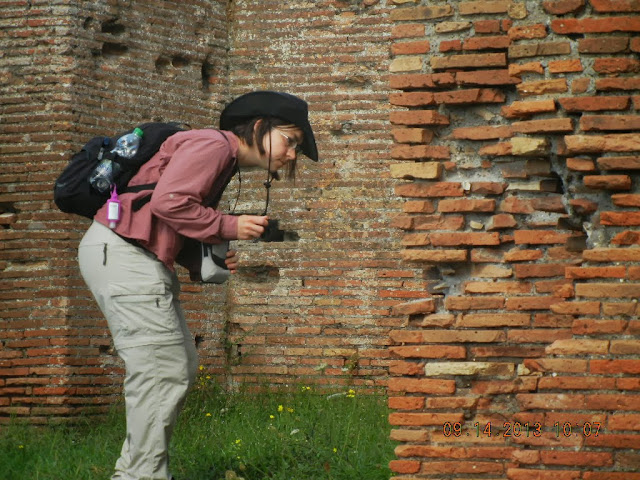 A mosaic floor, open to the skies now. 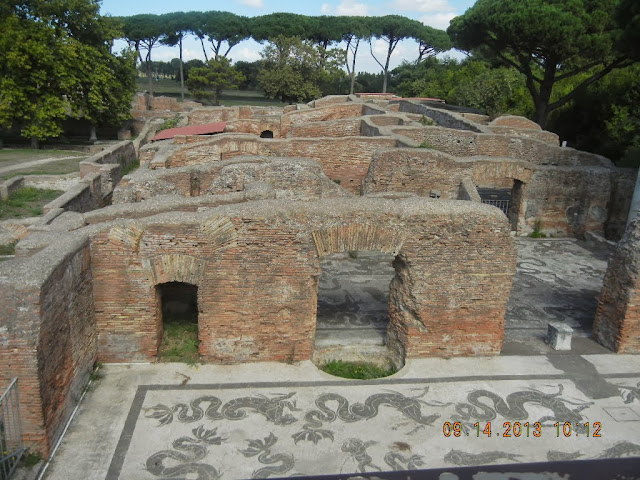 Part of the cemetery at Ostia, outside the city walls, as required by Roman tradition. The niches were for urns with ashes. 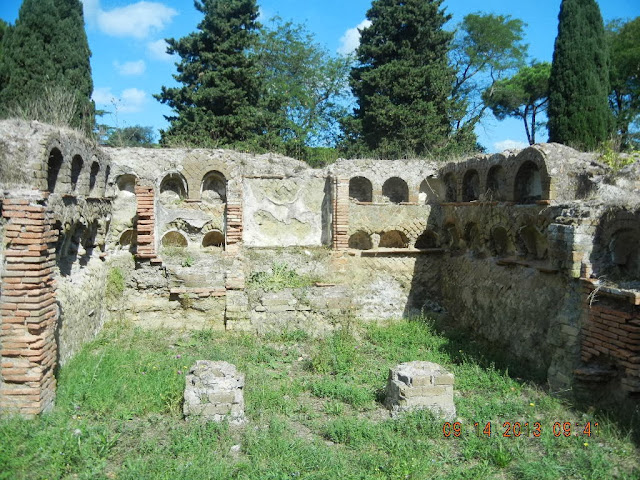 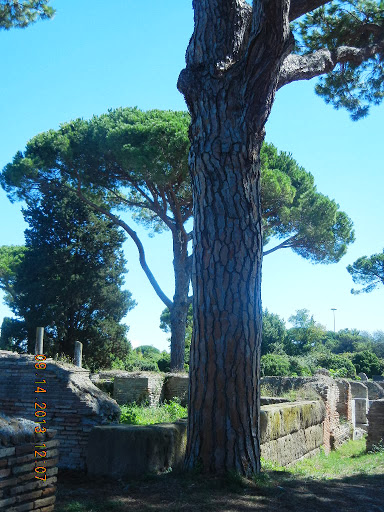 One of the rooms in the crypt of the church of  Our Lady of the Conception of the Capuchins, All of the decorations are human bones from the monks over the past few centuries, except their habits. No photos allowed; so got one from the web.  http://en.wikipedia.org/wiki/File:Capuchinos_2.jpg.

Teri, Anthea, and Regina at Trevi Fountain, along with hundreds of others. 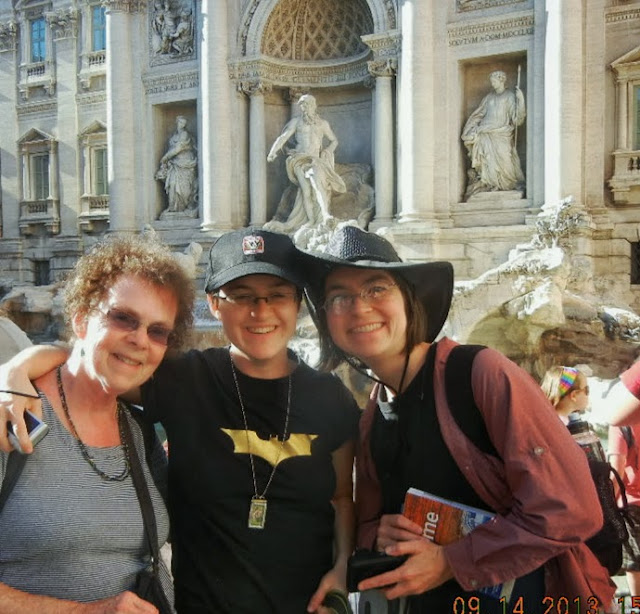 Anthea, Regina, and Jim at one of the fountains in Piazza Navona. 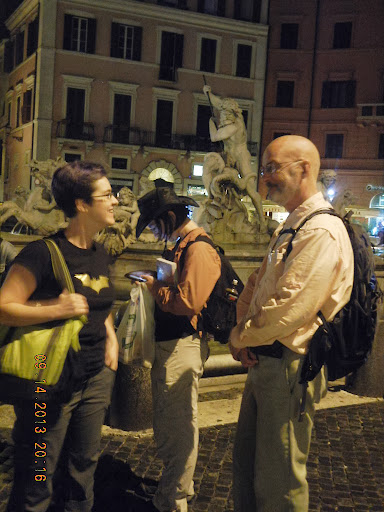 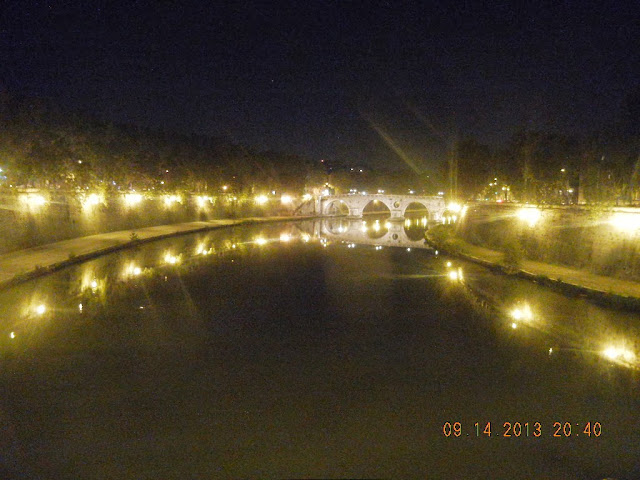