Posted on October 3, 2013 by Road Trip Teri
View from the Aventine Hill, with St. Peter’s dome, and the Tiber in the foreground. 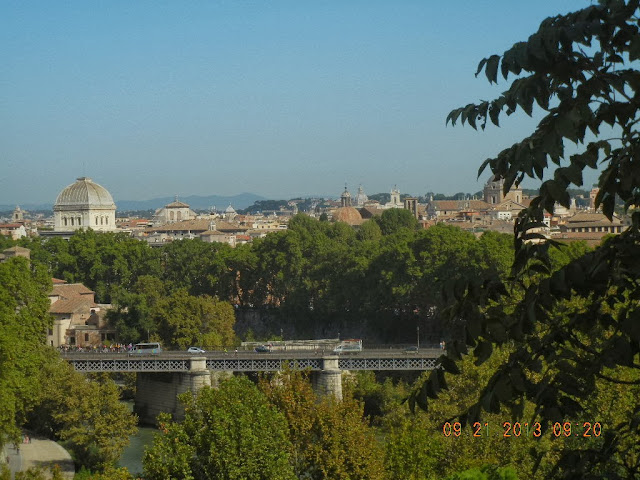 Or, as Regina says, “We came, we saw, we ate gelato.”
Our last day in Rome was sunny, hot, and involved some thirteen miles of walking according to my pedometer. Unfortunately, we only ate gelato once, but that was because we did so many other things.
Regina and Anthea have been the world’s best traveling companions, with ideas for things to do and the courteous persistence to make them happen. Regina thought we ought to take a walking tour, and  found one that was “free” (tips only), and would last from about 10:00 to 1:00. It was 2:30 before we bid Alessandro farewell and set out for what he said was recommended as the “world’s best coffee.”
In the intervening hours, he showed us everything from four or five churches, to the Knights of Malta’s little bit of sovereign country (with a peephole in the gate through which one looks down a long corridor of trees to a perfectly-framed view of St. Peter’s dome), to the bitter orange trees planted in a courtyard (bitter, so that people wouldn’t steal them). He was full of information and stories about the streets, houses, piazzas, and monuments.
One crucial bit of information that would have done us good at the beginning were the three rules for crossing streets taught to every Roman child from the earliest age. Never run (the motorist, motorcyclist, bicyclist is mentally calculating where you are and where you will be if you walk at a steady pace; if you hang back or run or do something unexpected, the calculations will be off by the fraction of a second necessary for it to all work smoothly); walk at constant speed; and don’t show fear (don’t just stand on the sidewalk waiting because the motorist takes that as fear and goes ahead). You just step out (at a crosswalk) and start walking steadily. It’s extraordinarily unnerving, but has always worked so far.
Alessandro took us to a small restaurant that served tasting plates of their various foods for our lunch. Taste of Trastevere specializes in locally grown foods, and the owner brought us platters with zucchini flowers stuffed with cottage cheese (only the male flowers are used for this because the female flowers have the zucchinis attached); little bites of hard cheeses with a sweet chili jam, small pieces of bread topped with pesto and tomato, roasted peppers, pickled cabbage shreds, and more, all well drizzled with olive oil. The beers were locally brewed, and the wine as well. So delicious.
After we parted ways, we found the “best coffee” — it was tasty, about 70% crema and 30% coffee. Best ever? The jury is out. Next, gelato and granita to cool off from five hours of mostly walking. Then, time to head home, stopping at another couple of churches, and doing a little shopping along the way. We found a street with mostly Asian shops — a small grocery, several tailors, alternating with small clothing shops, and some Asian restaurants. There must be other ethnic conclaves in Rome, but we haven’t seen them.
I have resisted taking tours, but both the Etna tour and this walking tour turned out very well. Perhaps the key is to look for small groups and focused interests. Our little group had its own dynamic — two Slovenian young women on holiday (they were wearing out, and decided that the lunch place wouldn’t suit them, so left us at that point); a tall,very well-traveled Norwegian who spoke excellent English who left after lunch to meet friends; an Italian guy in his 40s who didn’t have any English, so only talked to Alessandro; a Portugese au pair; and a German girl who was an exchange student. Alessandro oriented some of his commentary to the au pair and the exchange student, “because they will be here longer.”  Other tour groups seemed to specialize in young clerics, or retired people, or specific interest groups, and were often much larger.
This panel from a huge 5th-century wooden door at St. Sabrina’s shows Moses and the Hebrews in Egypt, and crossing the Red Sea. When the door was restored in the 19th century, the sculptor replaced the villain pharoah’s face with Napoleon’s. 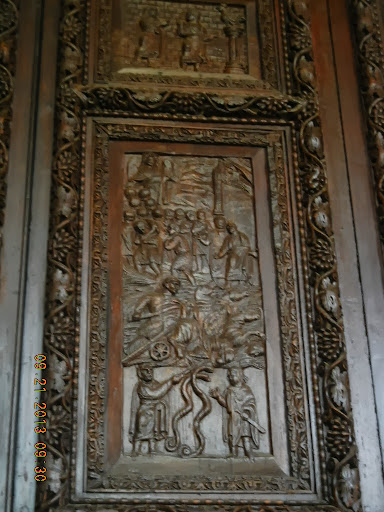 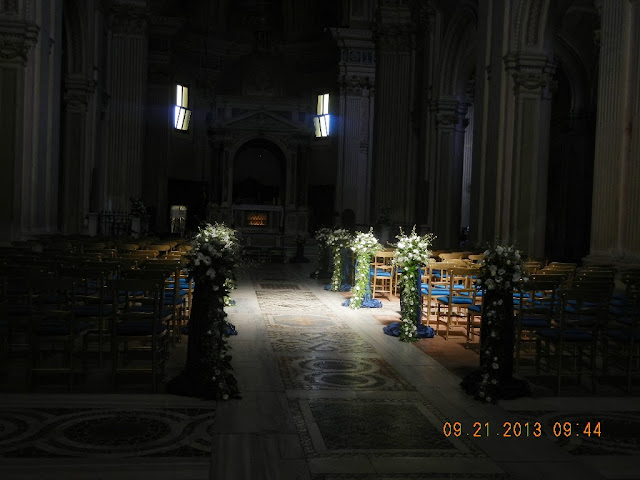 The entrance to the Knights of Malta’s sovereign territory, with Alessandro and Regina at the right lower corner of the photo.. 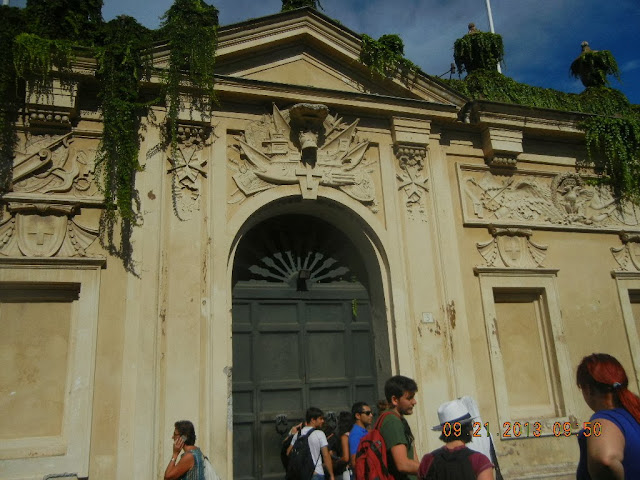 A special type of marble inlay, Cosmati, named after the medieval family in Rome who specialized in it for several generations. The mosaics often used pieces of marble salvaged from the ancient Roman ruins. This is in Santa Maria di Cosmedin, a very old church, but was widely used in all sorts of buildings for a couple of centuries. 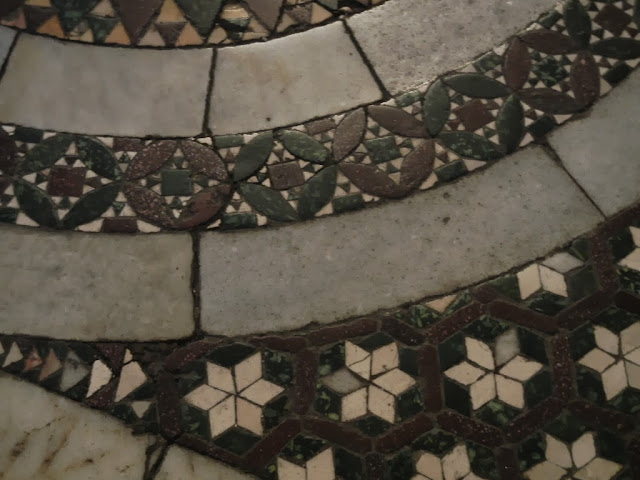 The skull of St. Valentin, set in a gold reliquary, in a side chapel in Sta. Maria di Cosmedin. [Sorry about the blur.] 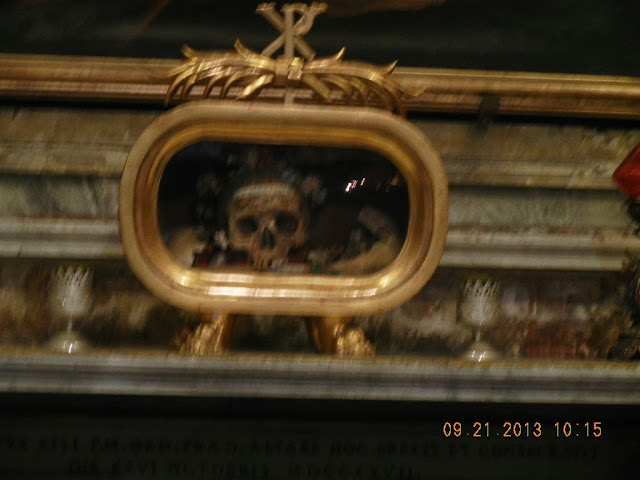 And now, for something entirely different — a Smurf-painted bus. 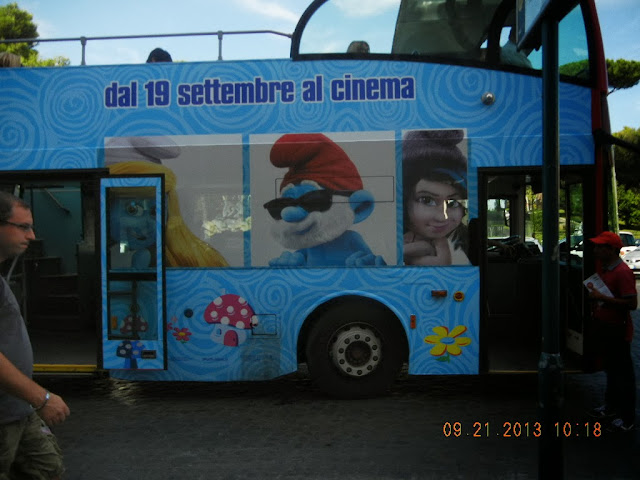 A Segway tour group. We saw several of these, and a bicycle tour group, along with the numerous other walking groups. Note the blue sky, and the people dressed for summer. I think about how we will be dressing in Anchorage when we return there (snow in the forecast for Tuesday), and cherish these views of a world into which snow rarely falls. 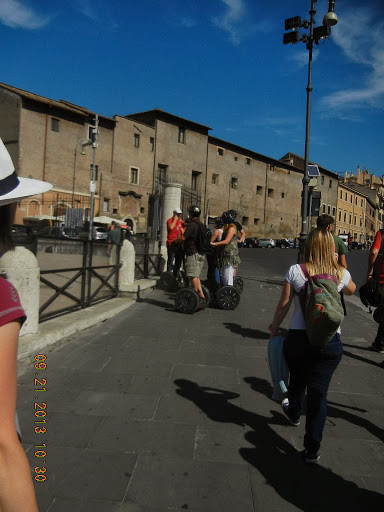 The turtle fountain in Piazza di Mattei. The story associated with it, according to Alessandro is that a young man wooing his love was rejected by the girl’s father because he didn’t have enough money. To prove to him that he did, the suitor invited the father to spend the night at his house in the piazza. In the morning when dad awoke, the ambitious young man showed him the fountain which had been put in place overnight. Dad was persuaded, and the couple married. Alessandro pointed out that among other problems with the story, the house of the supposed suitor in the piazza post-dates the fountain by a dozen years. The fountain was built in the 1580s, and restored about 70 years later, at which time the turtles were added. The fountains around Rome supplied drinking and cooking water to the citizens. 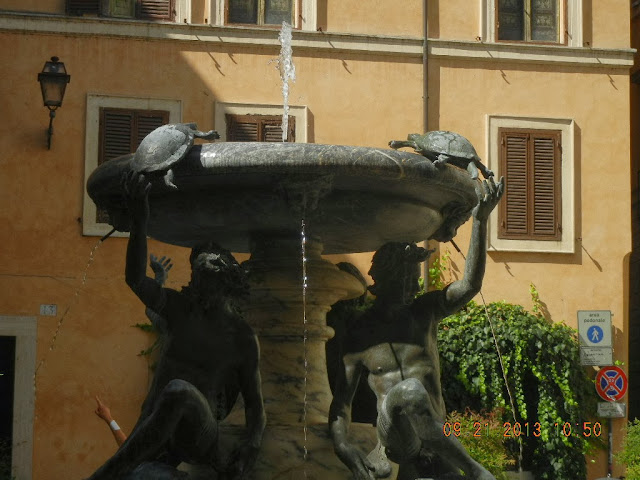 The current version of fountains for the citizens of Rome (and the tourists). One of our group filling her water bottle. The water is cold and clean, often preferable to tap water. 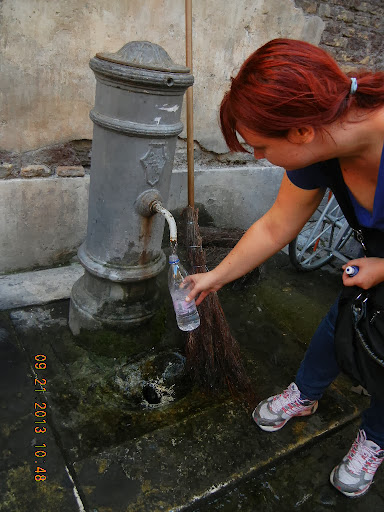 Padlocks on the chains across the entrances to footbridges across the Tiber are placed there by young couples to symbolize the eternity of their love. The key is thrown into the river. 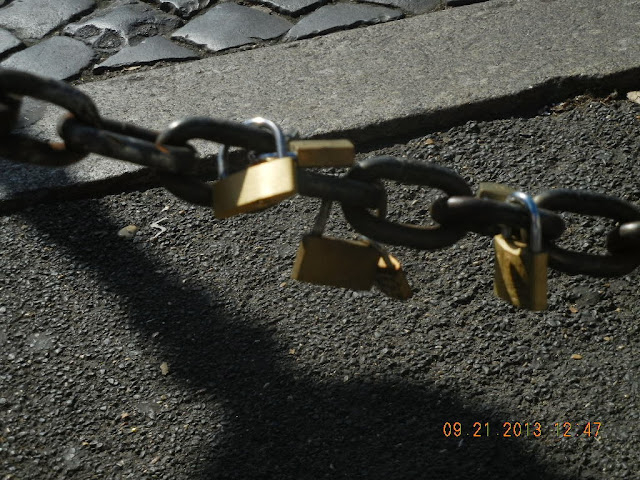 A wedding couple, near the Teatro di Marcello. Presumably their padlocks worked. 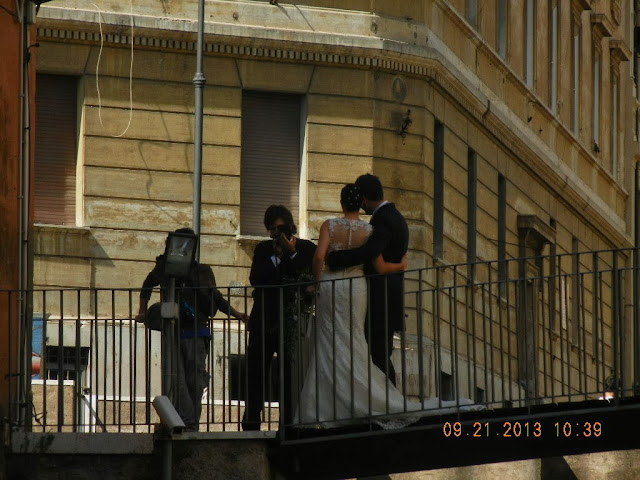 At Taste of Trastevere, lunch plates for the non-vegetarians — we all shared the different tasting choices on these trays, and the trays that the owner prepared for the vegetarians. 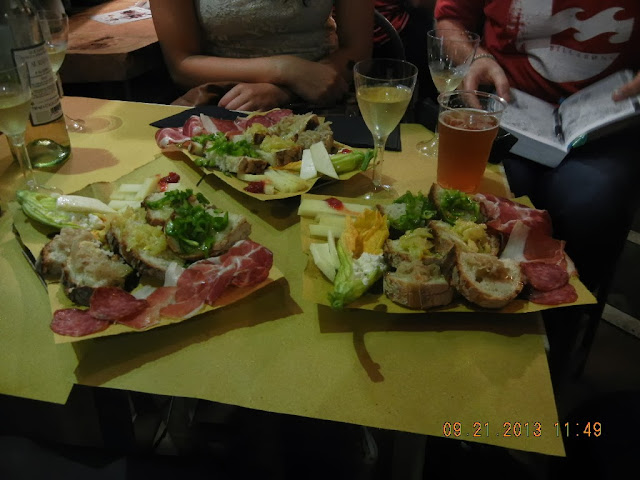 Seen in a chocolate shop — cannabis chocolate (to be eaten as you sip your cannabis absinthe spotted last week). 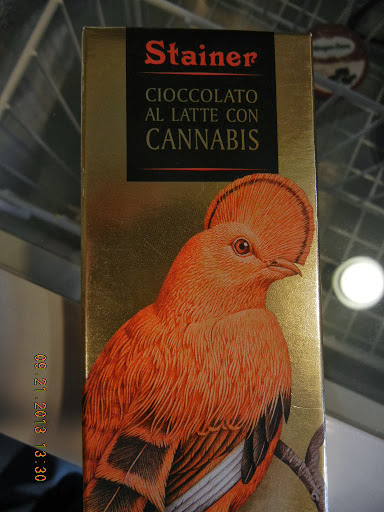 Regina with “Starz and Stripez” beer, locally produced, and the owner of the Taste of Trastevere. 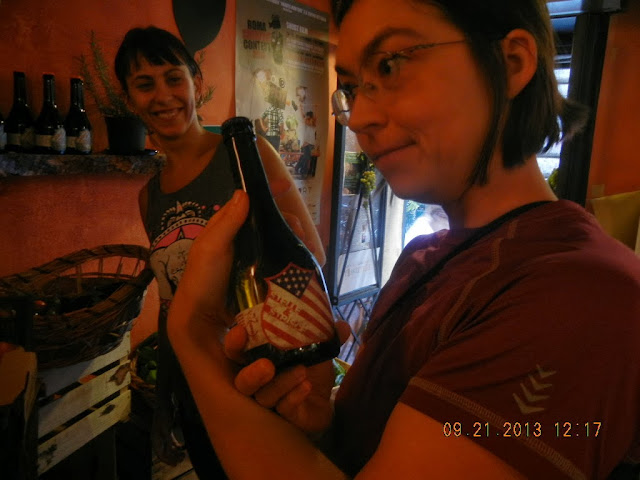 The other of the day’s wedding couples. We saw two, plus preparations for a couple more, plus a christening party in a piazza. 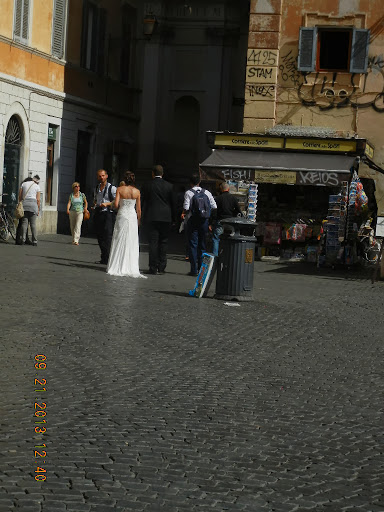 A flower wagon on a side street. 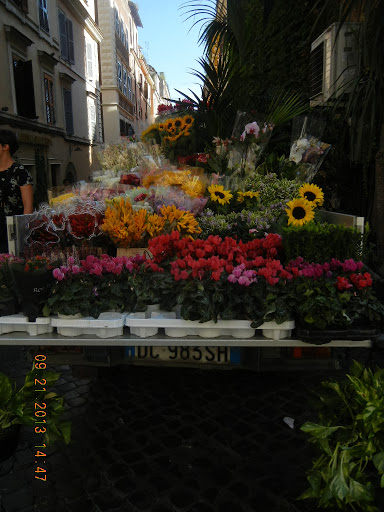 Another mosaic, this one at the entry to Santa Maria di Maggiore. Regina noted that the pattern in the marble has been carefully incorporated into the picture to create the stripes above the end of the key. 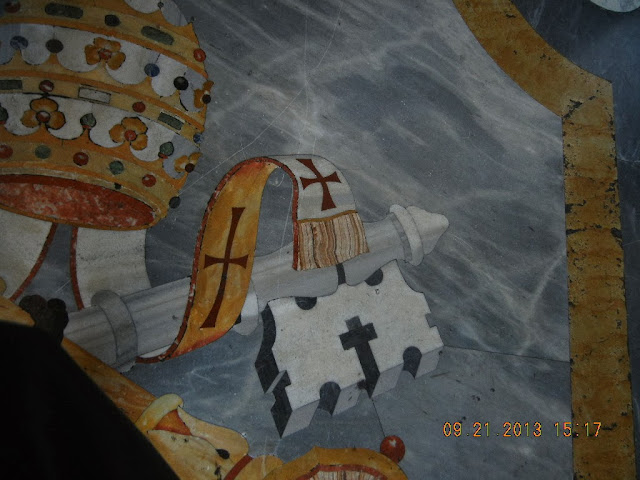 The mosaic dome in Santa Maria di Maggiore, dating from the 5th century C.E. Rome is filled with an amazing number of beautiful things, an overwhelming number, and a very high percentage outside the museums. 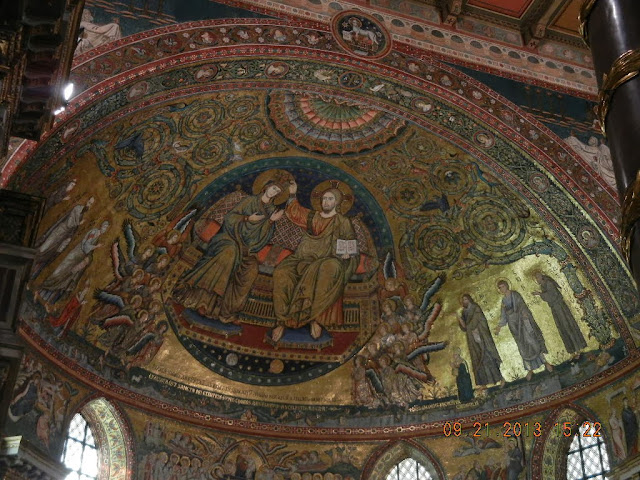 A charming window in a side chapel in Sta. Maria di Maggiore. The churches, especially the older ones, are filled with unexpected bits of art and cultural icons. 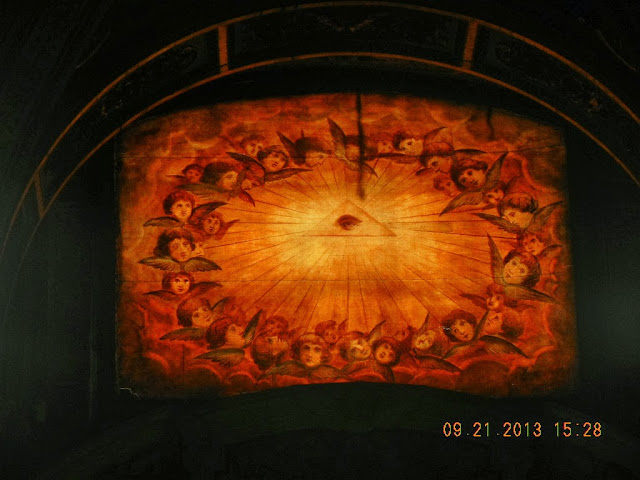 Regina with a bottle of Inca Cola from Peru, found in an international grocery store on our way back to our hotel. 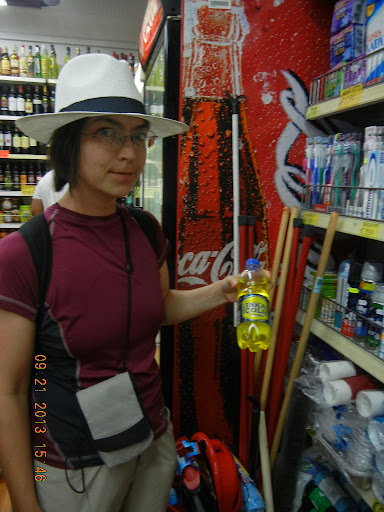 Boys playing basketball on a marble plaza, with ruins in the background. 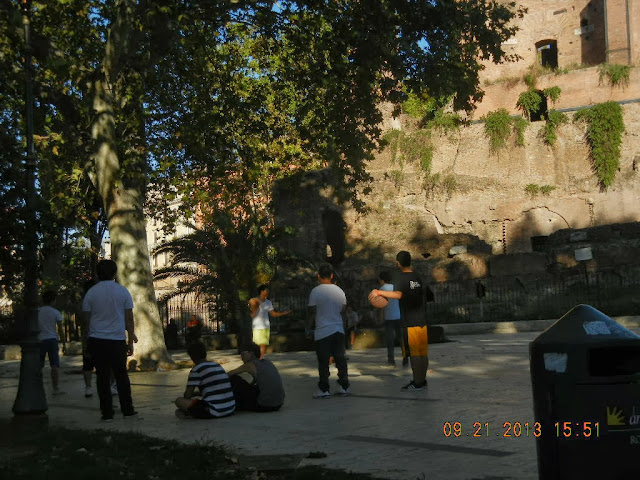 Picture on the roll-down garage door of a night club. Note that the cat now has an electronic cigarette. 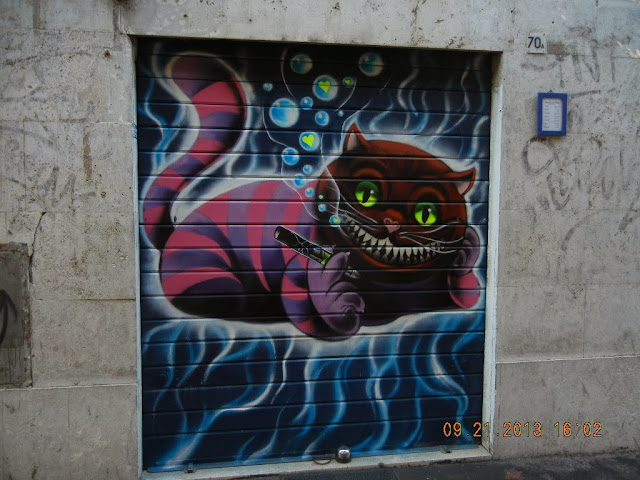 Grilled veggies for dinner at Al Grottino, a place we wish we could have eaten at every night. 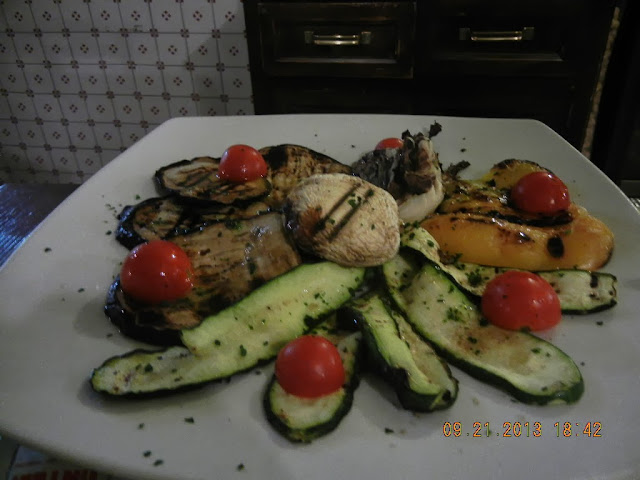 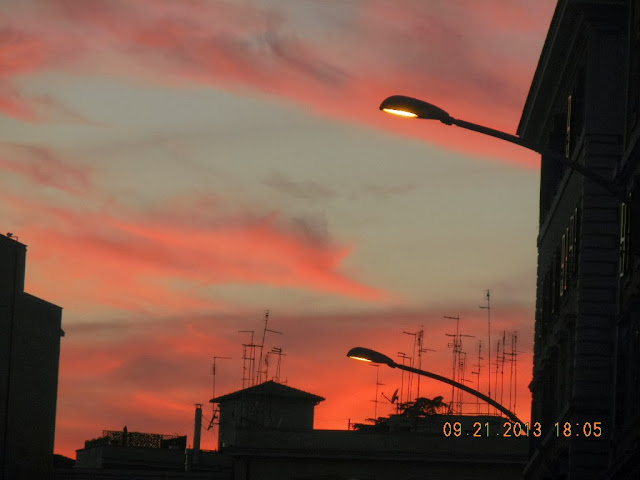 We will let you know how our return trip works out. We leave tomorrow morning for the airport, and expect to be in Seattle very early Monday morning (Regina got a better flight, so she will be there tomorrow afternoon). The forecast is for rain — a Seattle September, so our day there may be spent dashing under umbrellas from Trader Joe’s to meetings with friends, and other appointments. We get back to Anchorage very early on Tuesday morning, and are hoping that the snow that’s forecast decides to stay in the mountains.
At 12:30 a.m. the street outside is filled with the sounds of dozens of cars honking their horns, and motorcycles gunning their engines, for the past ten minutes. This has not been typical of the area. Something is going on, exciting for the participants, but a bit disruptive for people thinking that sleep on a Saturday night is a good thing (not me; I still have to pack).
Thanks for coming along with us. Your comments and good wishes have been much appreciated. Ciao for now!