Posted on October 3, 2013 by Road Trip Teri
The lower levels of the Coliseum. 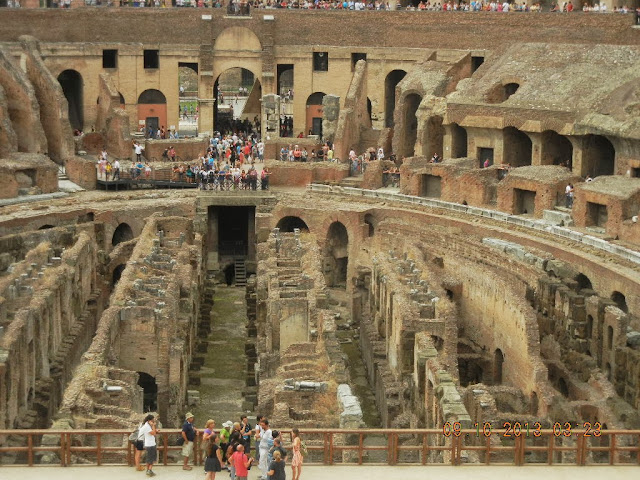 Expectations make poor traveling companions. They are our hairshirts, our “true pilgrims,” our crosses to bear. They are never satisfied, always complaining that we’ve slighted them. They pout a lot. Meanwhile, we are figuring out ways to put them in their proper context, so that we can get on with taking pictures of yet another set of ruins, or spotting more gelato shops.
Our goal for the day was the Coliseum, and we did get there. Along the way, we discovered that another goal was to eat fabulous Italian food, and we realized that we had not really been doing that. Things happen — the good-looking croissants from the pastry shop turn out to be bready and dry; lunch time comes along, you’re in the vicinity of a tourist spot, and the only things to eat are overpriced and underwhelming. Good food doesn’t just happen, even with our best efforts.
For the evening, we focused on the good food, and found it at Da Vittorio near Piazza San Cosimato — a small place, with excellent gnocchi and pasta arriabata, and house wine in a little pitcher to share among the three of us. The people were friendly, the portions very large, and the bill for a dinner about the same as an uninspired lunch cost (lunch was in fact, almost Anthea’s undoing — bread, tomato and cheese sandwiches, the same things that we ate on the Camino almost every day only not nearly as good. It was too much to be borne, in a country whose food is even better than its scenery).
We walked to the Coliseum, a couple of miles from the apartment (and only got lost for a block or two). Of course, along the way we stopped to photograph a dozen other things — King Vittorio Emanuele’s monument, the one with the chariots and winged victories that we saw yesterday from Janiculum Hill. A set of ruins with Roman shops, and then churches built on top of them and one on top of the other. Lots of tour groups like the one below; the leader with her pink umbrella. And plenty of “self-guided” tourists, like the young woman to the right of the photo, studying her guidebook. 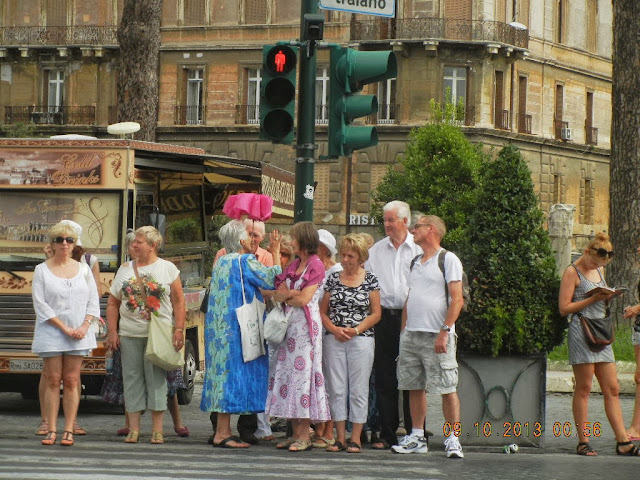 The Ponte Sisto, with blue sky in the morning.

A fresco from the church of St. Rita. In a manner typical of Rome, the story of this site is lengthy. Excavated 30 or so feet below this fresco are the remains of a shopping/apartment from 120 C.E. Retail stores were on the first floor, and apartments on the next three floors up. Several hundred years after that, a Romanesque church to St. Biagio of the market was built between 1000 and 1100 C.E., and the bell tower from that church along with the remains of the earlier Roman building were incorporated into St. Rita’s church in 1665 by the architect Carlos Fontana.

Street  scene near the Coliseum. Tourists on Segways pass by a “Roman soldier” who is putting a feathered helmet onto the woman standing next to him. Then someone will take  photo of them, and he will have money in his pocket, and she will have a souvenir. There were at least a dozen of these guys plying their trade inside and outside the Coliseum. 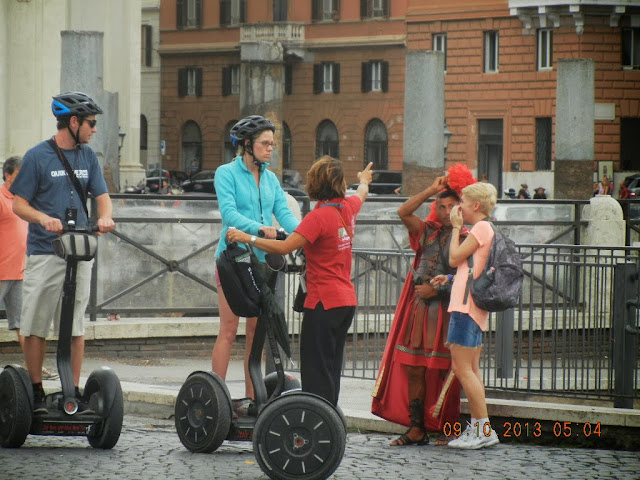 A mosaic commemorating games in the Coliseum. Its primary purpose was to exhibit combat.

Small clay lamps left behind by spectators. Were these the second century equivalent of cigarette lighters or cellphones at modern day events?

An artist’s imagining of what went on in the bleachers, based on items left behind, and accounts of the day — people didn’t tailgate, they brought their stoves with them and cooked the food on the spot. Wine was provided in measured doses, but some folks drank too much, and got belligerent. The buskers played the harp for a few extra coins, ladies put on makeup, people played games, and carved their names into the stone seats. 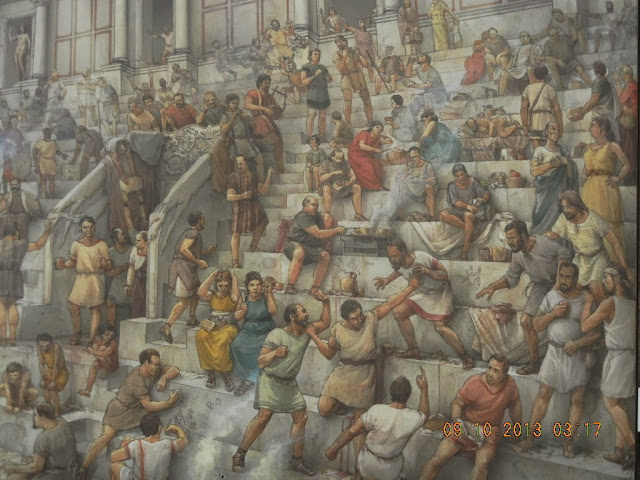 The lower levels of the Coliseum. The below ground rooms, separated by the long walls, were used for caging the animals, for gladiators to dress and prepare, and for all of the various machinery, water channels, and the like needed to make things run smoothly. The semicircular wood platform is modern. 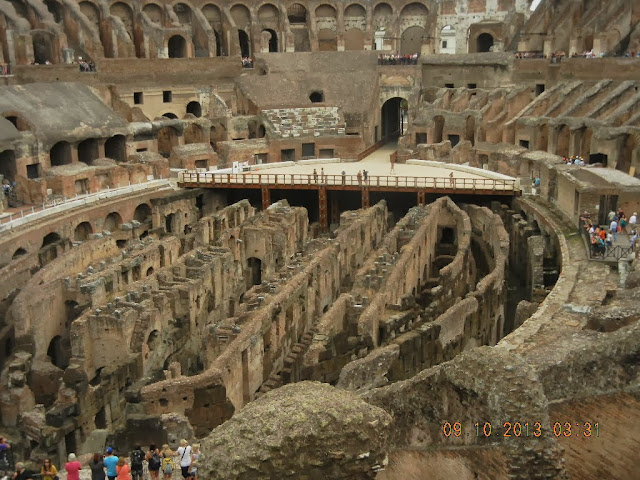 Upper reaches of the Coliseum. This shows a little bit of the underground at the lower left corner, and all of the different levels going up. There is an immense amount of stone and brick and mortar here, and it has held up for nearly 2,000 years. Vespasian started it in 70 C.E., and his heir Titus finished it in 80 C.E. – not bad for something of this size and complexity. The area had been devastated by a fire in 64 C.E., so was available for building, and the fund for the undertaking came from the sack of Jerusalem and the wealth of the Temple. By the late 6th century, the Christians had built a small church at one side, and the arena was converted to a cemetery, For hundreds of years, people rented the spaces in the arcades for shops; in 1200, the Frangipani family took it over and used as a fortress/castle. A religious order moved into part of the building in the mid-1300s and used it until the 1800s. Starting in about the 1500s, the various popes renovated parts of it, and eventually the monks moved out. 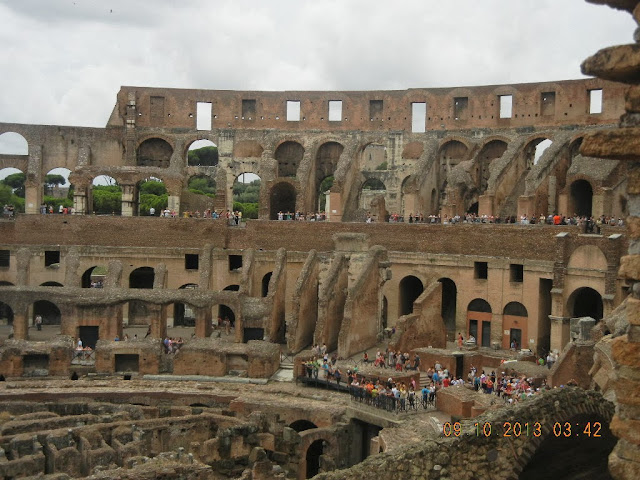 Another wedding, in an area right outside the Coliseum.

Science/archaeology happening. We saw groups of (mostly young) people working at sites all around the area. These were in a blocked-off spot on the upper level.

No climbing on the ruins. A friend of Anthea’s was hoping to see a photo of her perched at the top.

A street performer, appearing to be levitating, near the Coliseum.

Cats. We had been wondering where they were – we have seen plenty of dogs (always attached to owners), but no cats at all. As we passed a set of ruins on the way home, we saw dozens of them lying about, or stalking the walls. Turned out that there was a cat shelter in an area under the street that opened into the ruins and housed dozens of them. They seemed well-fed and friendly. This one is thinking about whether to let Anthea scratch behind its ears. 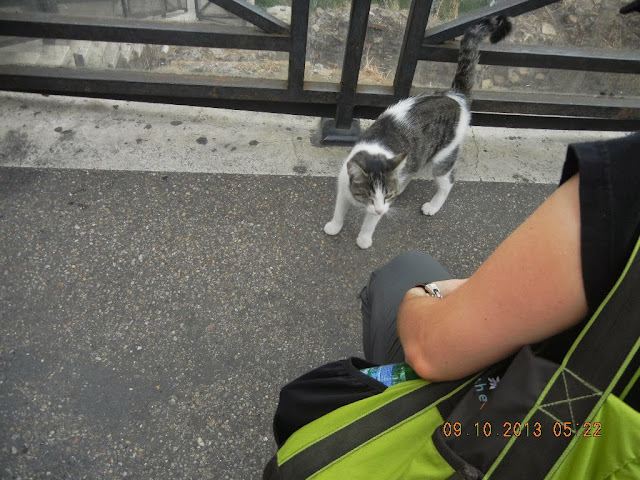 The evening’s gelato from Fata Morgana in Piazza San Cosimato, all organic, and very reasonably priced (one euro a scoop; most other places have been charging two euros a scoop). Jim had chocolate, and peaches with white wine. Anthea had something called Panacea with rose water and violets, and the darkest of chocolates. (Afternoon gelato for Anthea had pink pepper and star anise, and was quite tasty too). 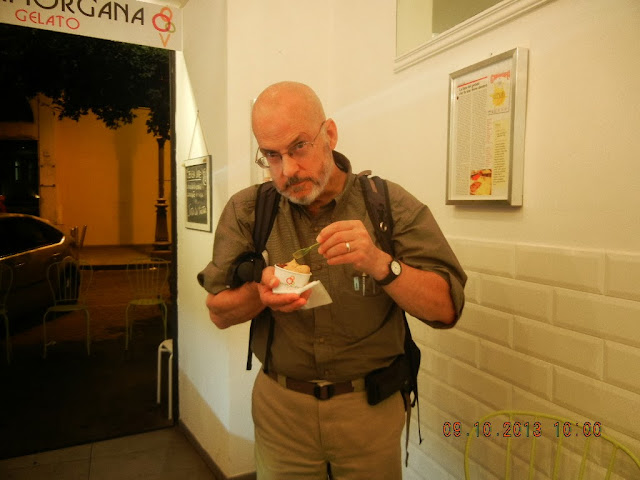 A fruit stand near the Coliseum. As would be expected, there were plenty of vendors on the streets around the Coliseum and in among the many other ruins in the neighborhood, but not nearly as many as I would have thought.