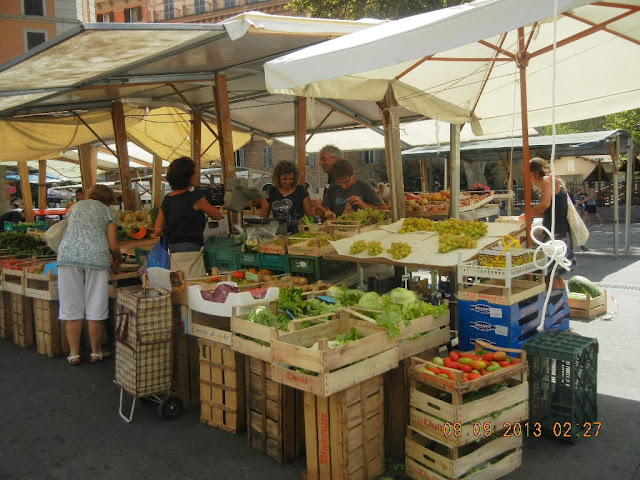 Street market, Piazza di San Cosimato, around 1:00 p.m. so some of the displays are sparse. Sunshine, much of the day, and a breeze.

Notes from the day:

Some of us slept until nearly noon, catching up from jet lag. I spent my time in the morning reading the Italian news. This might be a good thing to do every day. There’s nothing dull — “Smugglers set marijuana shipment afire off Sicilian coast while police give chase. . . 30 tonnes [of marijuana] left after the fire was extinguished.” “Mt. Vesuvius could erupt at any time [this is in addition to the new baby volcano by the airport].” This sort of news is not in the New York Times.
Trastevere — means “Beyond the Tiber.” In the old days (2,000 years ago) it was the only populated area on the west bank of the river, infested with foreigners and minorities. The Jewish community lived there originally, and the earliest Christians, along with the traders and seamen who came up the river from the port of Ostia.
Our primary task was to get SIM cards and data plans for our phones so that we can communicate with each other, hotels, and so forth. We were finished with this by 1:00 (pretty good, given that most of the group didn’t arise until noon), and ate an excellent meal of pasta and bruschetta sitting at an outdoor cafe on the San Cosimato Piazza. The restaurant had a misting fan directly behind us, so now and then, a cooling mist would settle on our shoulders.
We took the fruit and croissants purchased along our way to acquire the phone cards back to the apartment, and then hiked up Janiculum Hill (Gianicolo). We expected something more Camino-esque and brutal, but found shade, cobblestoned walks, and a short distance to the top. It had great views, as advertised, plus a monument to Garibaldi, and rows of marble busts on columns. The busts were of his family (or other people named Garibaldi), along with dozens of men who might have been generals in the Risorgimento (the unifying of Italy into a country in the mid-1800s). As is often the case, if there was an explanatory sign somewhere, we missed it.
Also seen on Janiculum Hill, a wedding, with bride and groom, a couple of attendants and a photographer. We walked down the hill and paused to photograph Garibaldi’s mausoleum, and there they were again. Looked like they had been hoping for a wedding shot of them in front of the mausoleum but it was closed for the day.
Before dinner, we walked along Viale Trastevere down to the Tiber River, just exploring. We found a supermarket, in the basement of a building under a clothing store; St. Agatha’s church with a priest saying an evening Mass for maybe half a dozen people; lots of people strolling along the river, including two young teen boys with fishing poles (interesting, because there are no boats on the Tiber this summer due to pollution); and many eating places, mostly with English translations on the menus. We got beers and pizza slices at the Piccolo Bar and sat outside watching the brilliant sunset framed by city buildings.
Seen on the way home from dinner — a couple of young men in dress suits running as fast as possible up the street. Looked in the direction they were running and saw flames and black smoke rising fierce against the night sky. Walked toward the conflagration, expecting fire trucks, sirens, people to stop us. None of that. We got to within about 50 feet of the fire, apparently a motor scooter of some sort, and found a few men watching. A street cleaning truck had come along, and its driver was spraying water on the fire. About the time he quenched it, the fire engine arrived, and the crowd began to disperse. We continued on with our search for gelato, marveling at the lack of interest in the fire from passers-by.
In the apartment — a real washing machine. No dryer, but hey — no washing everything by hand in the sink. We love it.
The motorcyclists appropriate the sidewalks here, as in Athens, although not as much. We remember to be attentive. Cars don’t stop at pedestrian crosswalks, any more than they do in Anchorage. We pay attention to them too.
Learning Italian (from the eating section of the Rick Steves Italian phrase book), my favorite phrase for the day: “niente con gli occhi.”*
And that more or less sums up the day. Tomorrow, the Coliseum, the Forum, and that area. 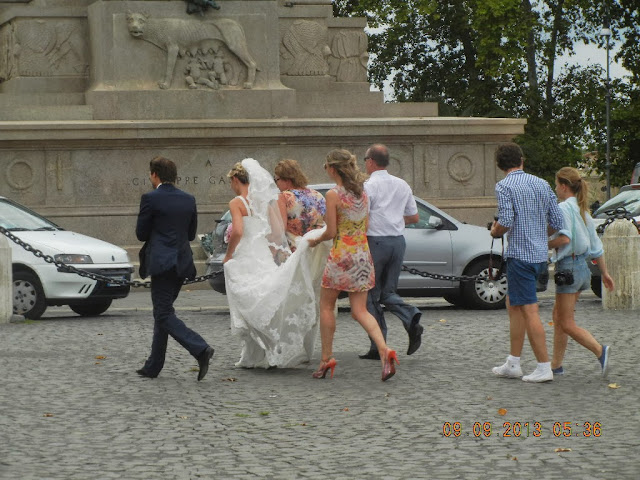 Wedding party near the Garibaldi monument at the top of Janiculum Hill. Note the wolf suckling Romulus and Remus at the base of the monument. 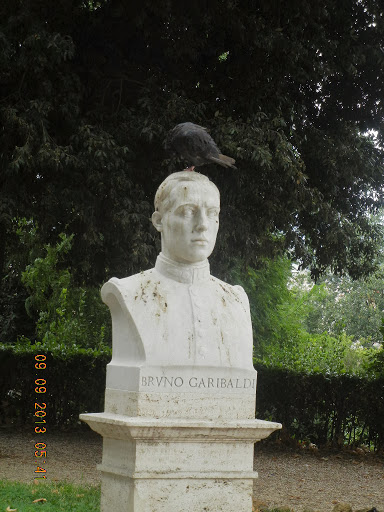 Bruno Garibaldi with black pigeon. The statues more in the open at the top of the hill fared worse from the pigeons than did the ones in the long row under the trees. 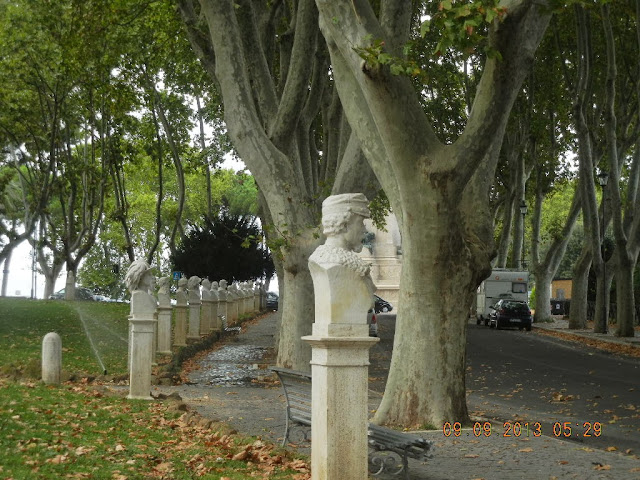 A long line of marble busts, shaded by plane (sycamore) trees, near the top of Janiculum Hill. There was great variety in the hat styles, their ornamentation, the facial hair, the costumes, and the faces. 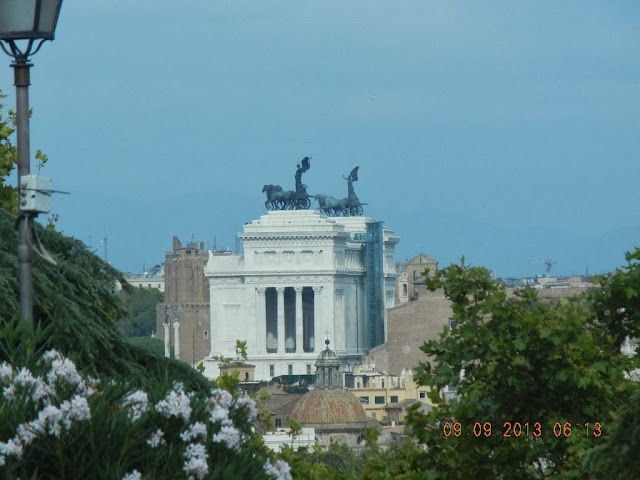 Monument to Vittorio  Emanuele, with bronze chariots driven by Winged Victories, seen from Janiculum Hill. He was the first king of a united Italy since the sixth century, assuming the monarchy on March 17, 1861. 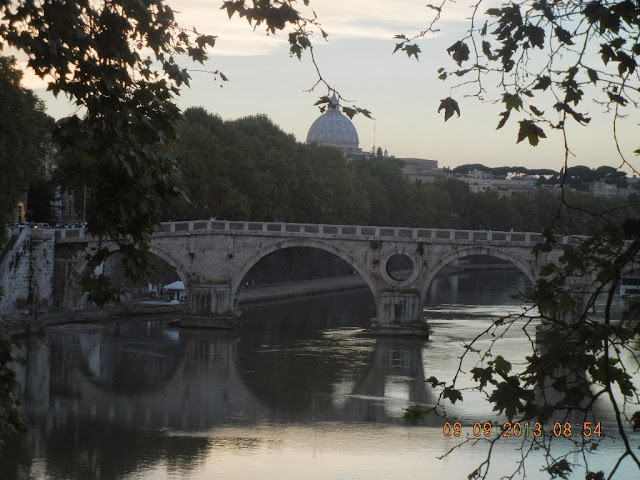 Ponte Sisto, a footbridge over the Tiber, 1479, named for Pope Sixtus IV who ordered that it be built. When the water comes close to the circle (“oculus,” or eye) at the middle it’s a warning that the river is likely to flood, and the central city should be evacuated. In 2012, the water was just at the base of the oculus. 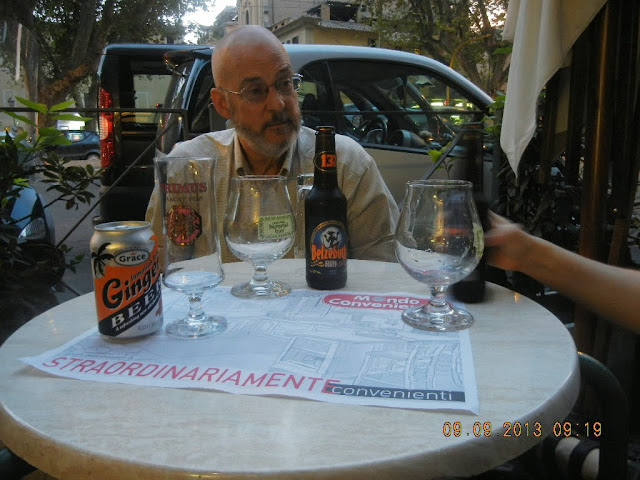 Belzebuth beer for dinner, a 13% alcohol drink that tasted a lot like hard cider. Anthea thought it went nicely with her work on Dante’s Inferno. [The ginger beer is for breakfast.] 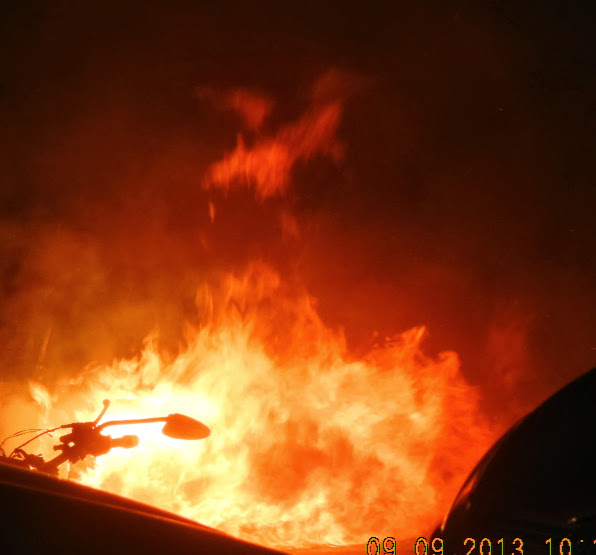 Motorcycle (?) on fire, a block up the street from our apartment. The guy with the street cleaning truck was the hero who put it out, shortly before the fire engine arrived. An amazing lack of interest by most people on the street. 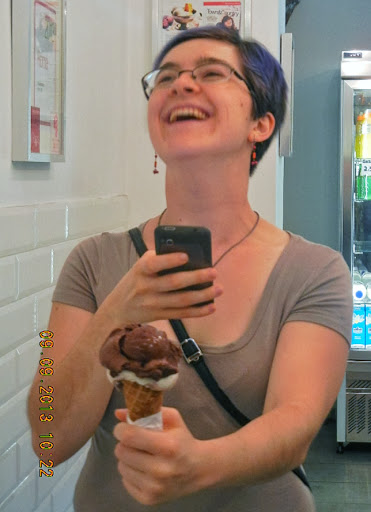 Anthea with gelato — chocolate, and hazelnut “Prince’s Kiss.”
* “Niente con gli occhi” means “nothing with eyeballs” [for me to eat.]