A small town Fourth with a big time race 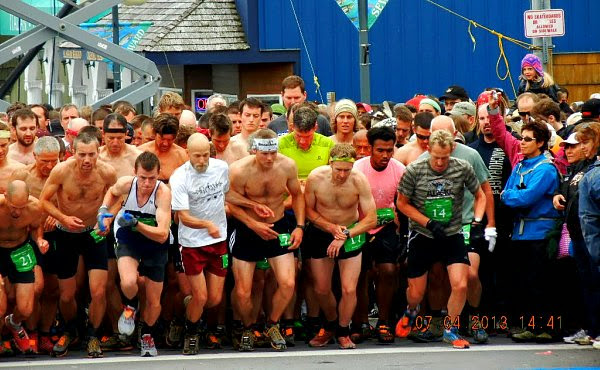 The gun goes off for the first wave of the Seward, Alaska Mount Marathon Men’s Race, July 4, 2013.
Seward (population 2,700) swells to 30,000 people every Fourth of July. The main draws are the Mount Marathon races, a 3.1 mile round trip up and down the gravelly muddy treacherous side of a 3,022 foot mountain that rises above the small frame houses. A whale-ish white cruise ship sits at the dock in Resurrection Bay. The ships that carry coal from the Usibelli Mine in Alaska’s Interior to ships bound for Asian ports are out for the day, leaving the town to the tourists and runners. Seward looks like the small Midwest town I grew up in — a grid of streets named after trees and presidents, small frame houses with neat little porches, shaded by old lilac bushes and tall evergreens. But it sits at the edge of a bay on the Gulf of Alaska, and mountains with glaciers surround it on three sides. It’s an improbable place for world-famed race built on a bar-room bet eighty-some years ago.
The races — women’s, juniors, and men’s — are what draw the crowds to Seward every Fourth of July. Once they’re here — families, bikers, tourists, teens — Seward sees to it that they are well entertained between the main events. The deep-fried halibut with corn fritters and honey butter are justly famous. Tacos, reindeer sausages, ice cream, and Kettle Corn are equally popular. The NRA has a booth, and places selling Silly String abound. The churches offer pies, chicken barbeques, bottled water, and sodas. And at 1:30, the parade starts.
The Coast Guard leads with the colors . . . 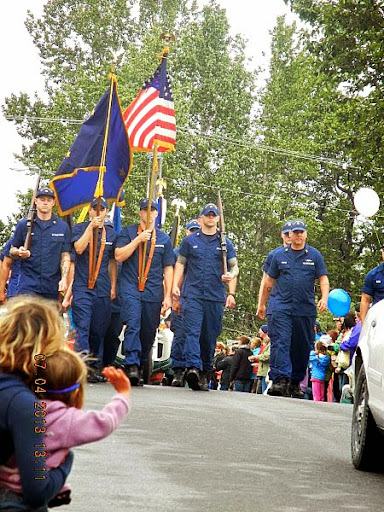 Followed by the bikers. Every good parade has royalty, 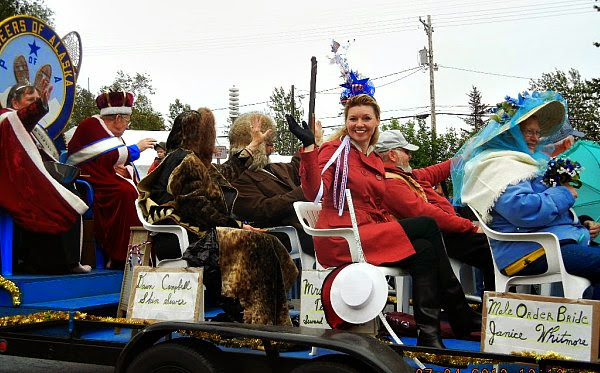 Patriotic cars — this one, a Corvette honoring vets, 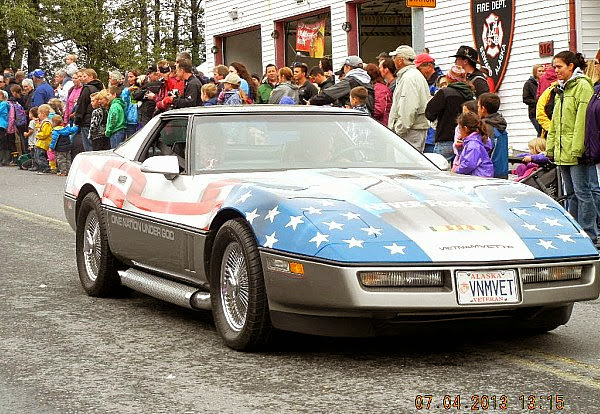 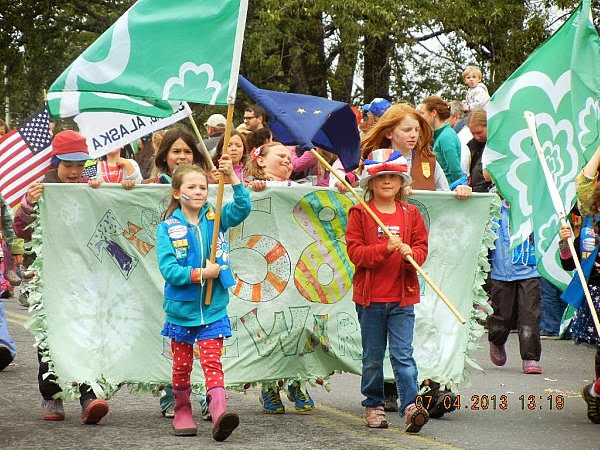 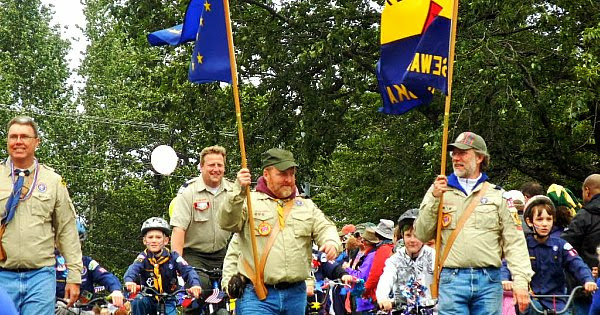 Plenty of red, white, and blue, 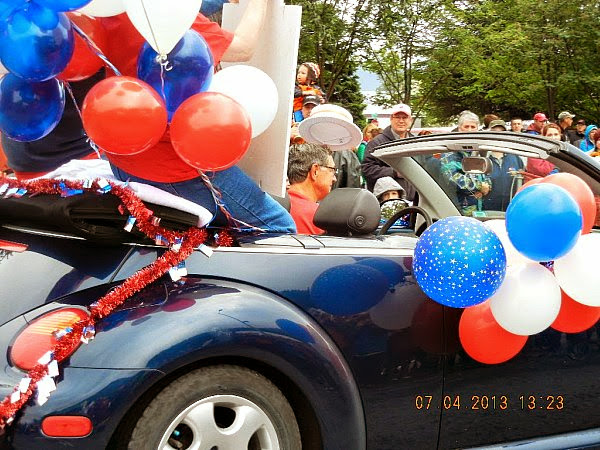 And fire trucks, the louder, the better. 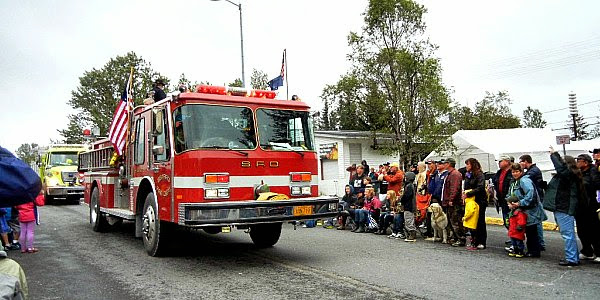 What Seward has that no place can boast of: determined women runners, headed for the finish line after the grueling and dangerous trek up and down the mountain. Everyone cheers, even louder than for the parade events. 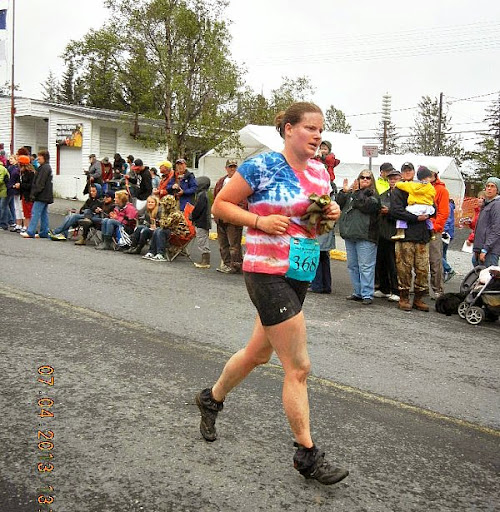 It was an excellent parade, even though the people in trucks and on floats didn’t throw nearly as much candy as in some years past. Also missing were the politicians. In 2010, the gubernatorial candidates, the Senate candidates, the Congressional candidates, and a decent number of people running for seats in the state house and senate were on hand to march along Main Street. They could have gone to much bigger cities — Fairbanks, Anchorage, Juneau — but Seward has the cachet. We’re looking forward to the 2014 parade for that reason, among others.
We stopped in at the gift shops up and down Main Street during the interlude between the parade and the start of the men’s race. At every step there was entertainment. 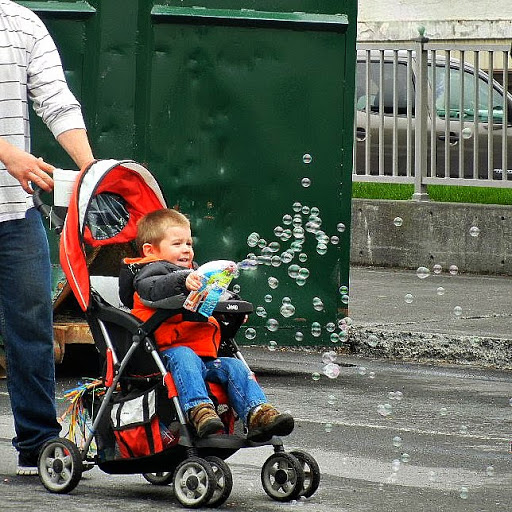 I wanted one.
Then it was time to watch the guys warm up, running, skipping, dancing, lunging back and forth along the block ahead of the start line.
We thought that Gumby might have extra protection if he stumbled coming down the hill. 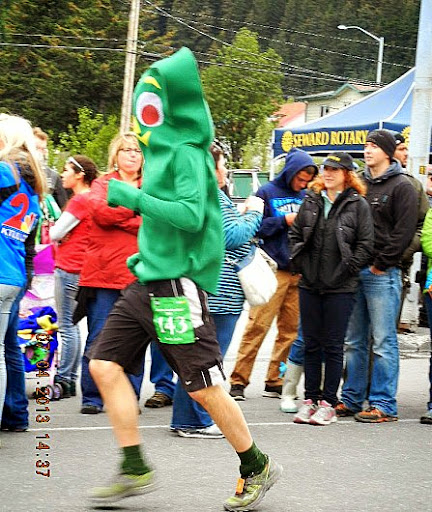 Most men didn’t wear costumes, but some were patriotic nonetheless. Observe that several have shiny silver ankles — they have wrapped the tops of their shoes and lower legs with duct tape to keep the rocks and dirt out. 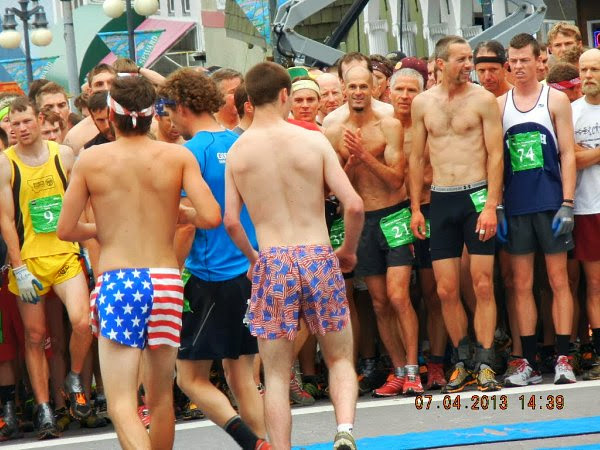 Waiting for the Mount  Marathon Men’s Race to start. 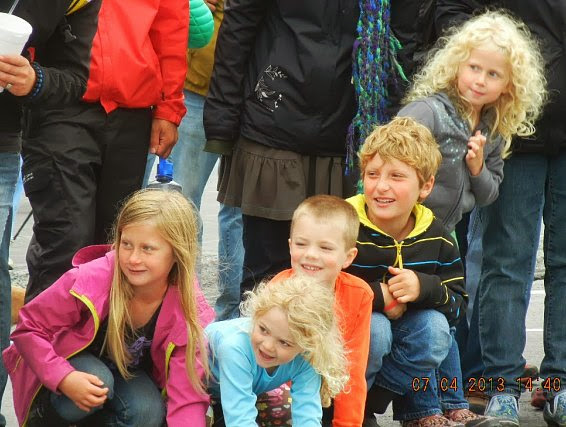 The second wave waits to take off, five minutes after the first. The red-painted guy didn’t add any extra weight with a costume, but he does look fierce. 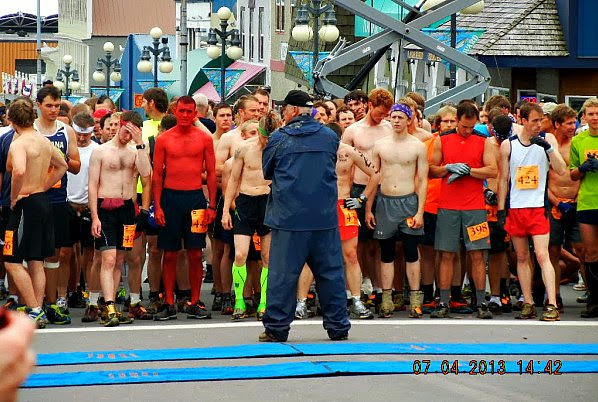 The first wave of men are already above the tree line about twenty minutes after the race start. Eric Strabel won the race with a new record  of 42 minutes, 55 seconds, breaking Bill Spencer’s time of 43 minutes, 21 seconds in 1981) Here’s Eric Strabel — number 8, to the far left of the photo, just past the start line. 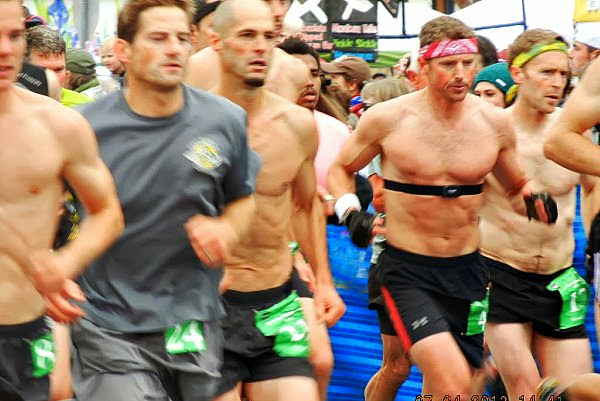 This entry was posted in Alaska Travels and tagged 2013, Fourth of July, Mount Marathon race, Seward Alaska. Bookmark the permalink.