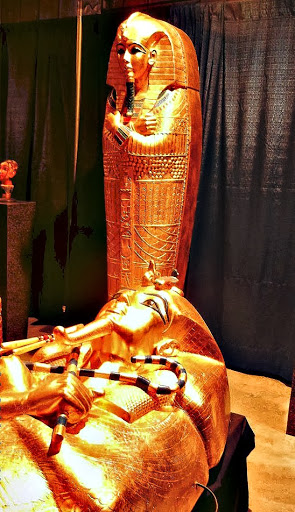 King Tut, and a princess (?). Not the usual Fair fare.

It wasn’t the Alaska State Fair that I remember from twenty or thirty years ago. Not that much was missing, except for the fried raviolis, but lots of things were new. King Tut showed up, for example. Marla, Jim, and I joined hundreds of other Fair-goers to walk through a traveling exhibit of reproductions from his tomb that had appropriated one of the exhibit buildings on the fairgrounds. Crowds paused at displays with the history of the tomb’s discovery, and ohh’ed and ahh’ed over golden warriors, and a reproduced mummy lying in the open coffin. 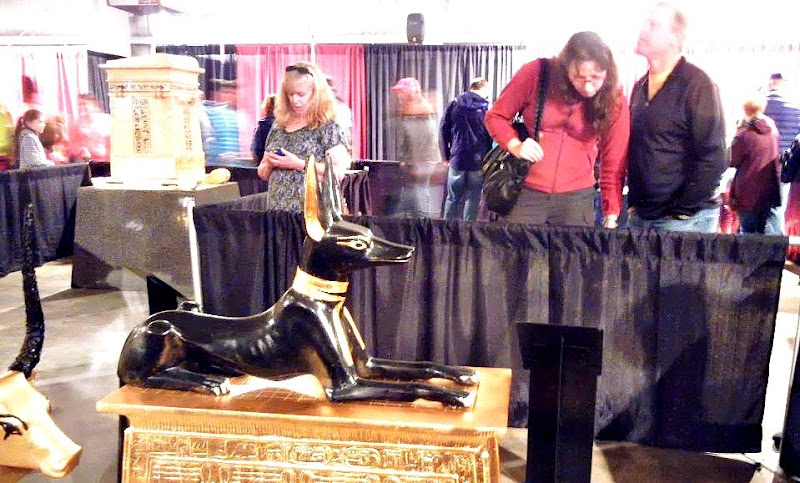 Instead of the hushed museums where such things usually reside, the golden statues  were crowded together, surrounded by hastily set up low curtains, and crowds clustering on every side.
Next up was Brad’s World Reptiles, a returning attraction for the last couple of years. You could crowd in with even more people and lots of kids to watch videos, admire the denizens of dozens of cages, or have your picture taken with an alligator for $6. 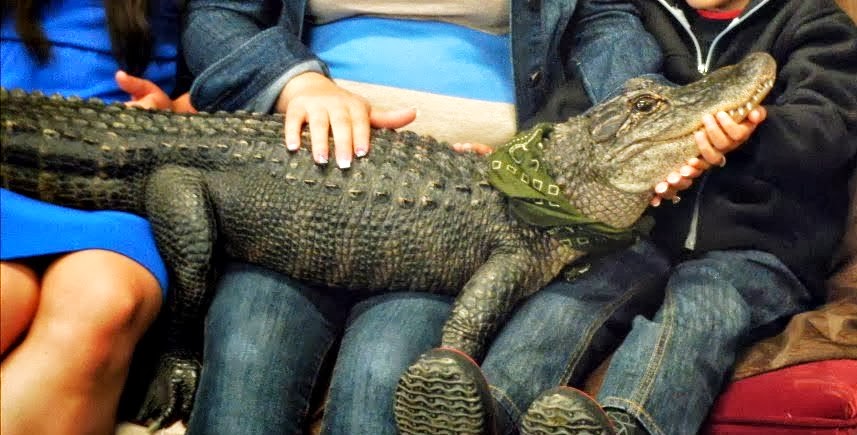 The alligator was alive but remarkably inactive — drugged? Chilled?
As we made our way through the crowds, we paused to glance at the wild variety of human endeavors and interests represented here — political parties, the National Rifle Association, energy companies (many more of these than in previous years; but I didn’t see any wood-burning stoves this year); hot tubs, tools, car raffles, pull tabs, tarot card readings, information groups, jewelry, art, antiques, cosmetics, specialty foods, religious organizations, gardening, and so much more. An article about the Fair in the Anchorage paper said that there were 405 people selling things and services (about 100 of them new), and 70 booths with food (none of them new this year). 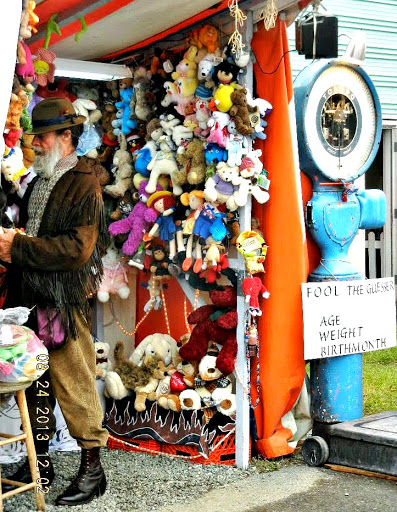 “Fool the Guesser” — he will tell you your age, weight, birth month, and along the way, sell you a stuffed animal or two. 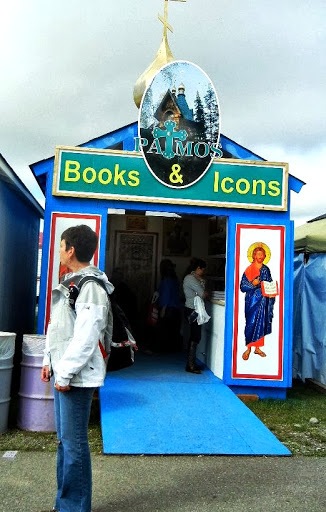 Marla outside one of our favorites, the Russian Orthodox church booth. 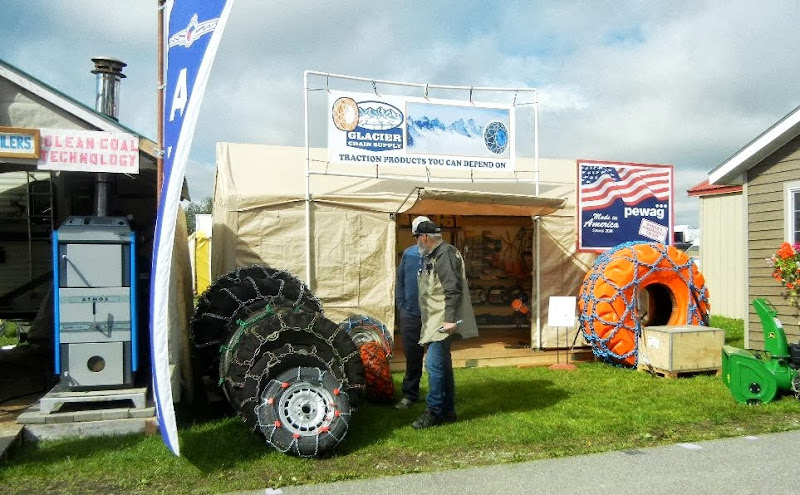 Clean coal technology, next to tire chains.
The weather cooperated. After days of gray and rain, the clouds still hung chill and damp over the Fair grounds when we arrived a little before noon. 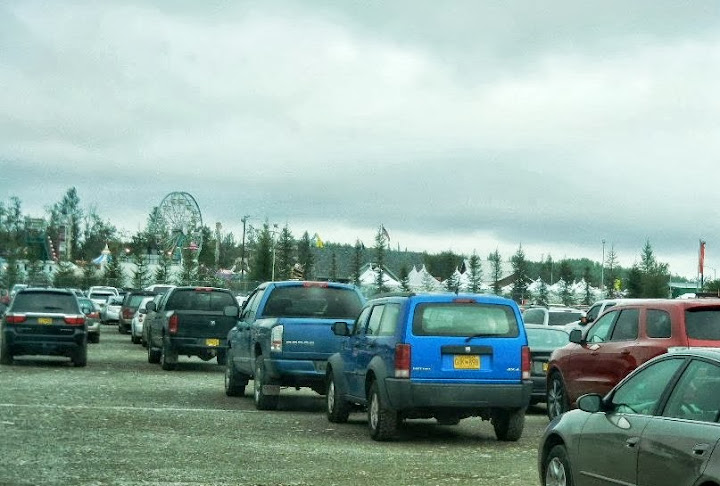 The half-full parking lot under gray skies, about 11:30 .am. 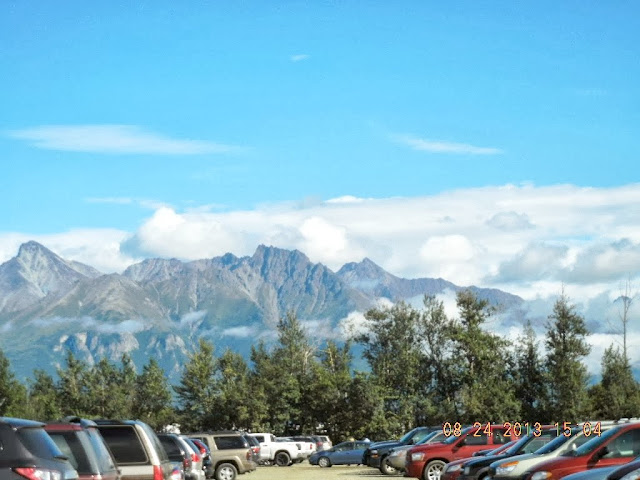 By 3:30 in the afternoon, the sun was bright over a mostly-full lot. The mountains were out, with a few clouds lingering.
A friend wanted photos of the racing pigs and the bunny rabbits. The pigs don’t race until later in the week, so we did our best with some curious young ones. 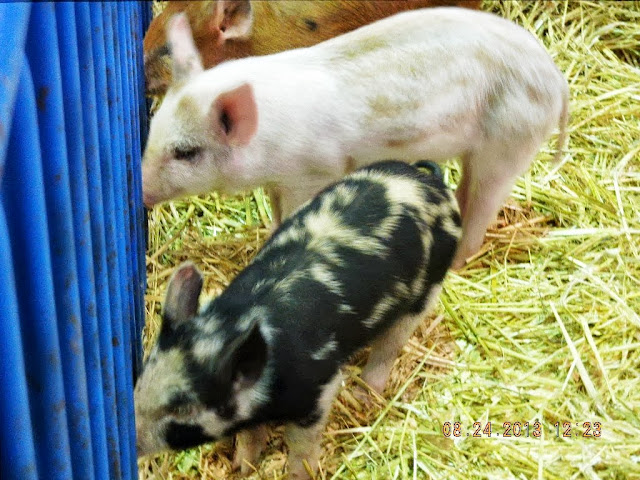 Two svelte young pigs, old enough to be inquisitive about the ruckus in the next cage over. 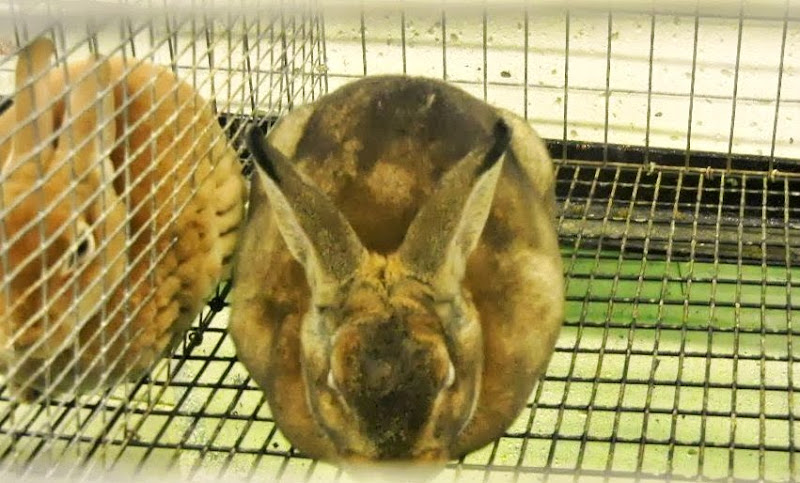 The rabbits were tougher to photograph, hemmed in with wire net cages, and mostly uninterested in their admirers. Some years, volunteers have rabbits out to pet, but not today. 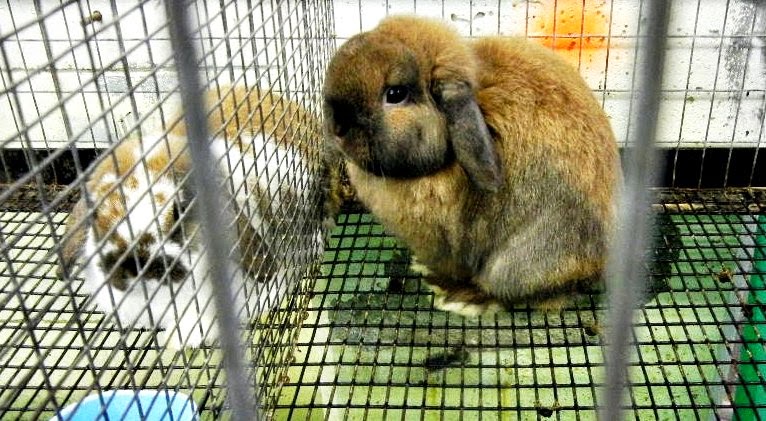 This one had a purple rosette for Grand Champion. It’s very cute in its rabbity way, but I can’t tell you why it’s a champion.
We thought that maybe not all of the animals were on display yet — the barn seemed only two-thirds full. The poultry, cows, pigs — all were scarcer than in years past. 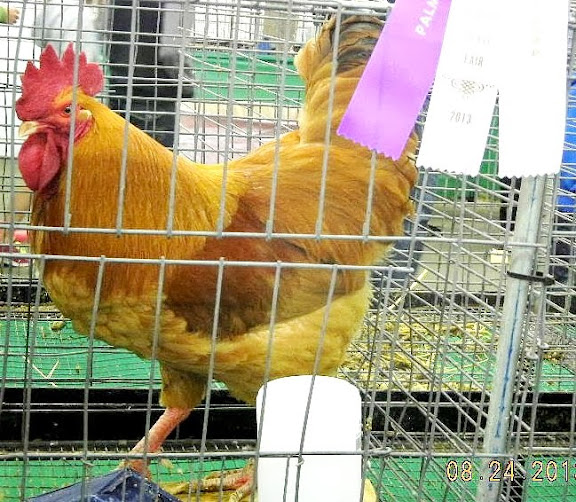 A champion rooster struts his stuff. 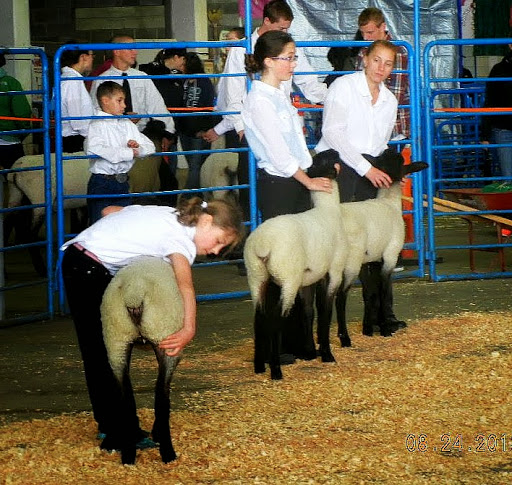 We watched the 4-Hers get their sheep ready to show. Someone nearby was explaining how the legs had to be positioned to show off the shape of the hips, and much more that I didn’t eavesdrop well enough to hear. 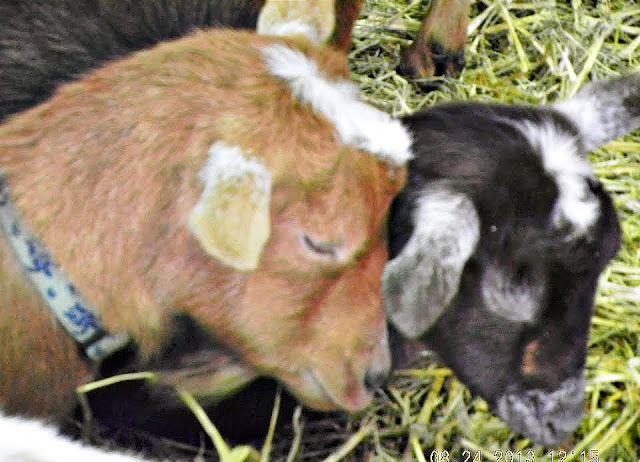 Goats were plentiful, asleep and awake. 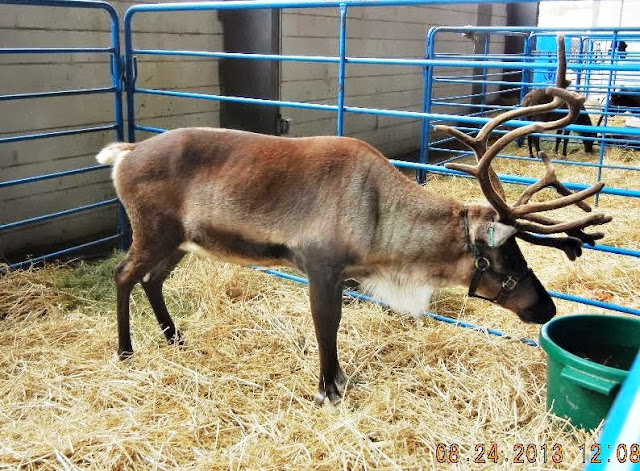 The Alaskan — a reindeer. His name is Oscar; he’s two years and four months old, and sadly, his destination was described as “market,” rather than “Santa’s sleigh.”
The barn holds all of the vegetables, which again seemed sparse this year. The giant cabbage weigh off isn’t until next week, so we had to make do with cabbages in the neighborhood of 43 pounds (the record is 138.25 pounds, set at last year’s state fair), and ten-pound kohlrabis. 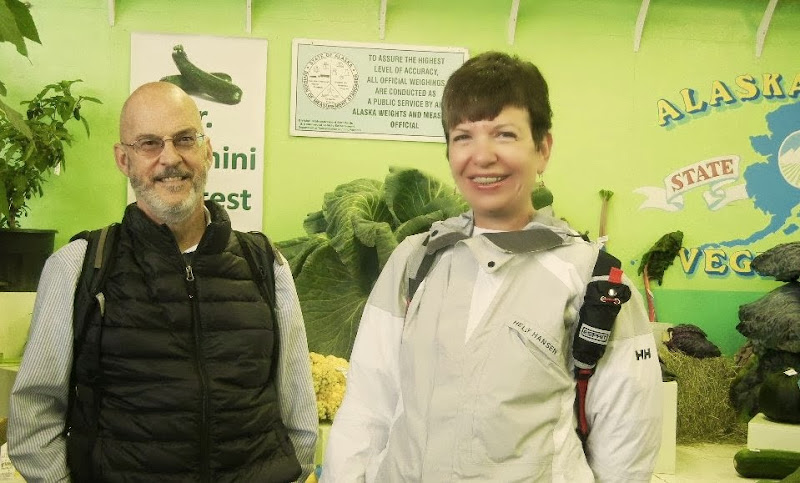 Jim and Marla in front of the big cabbage for the week. The monster ones come in a few days from now.
Last in the barn was the bonsai room, this year much smaller than in the past. It looked as if only one person had arrived as yet, so the bonsais were sparse. 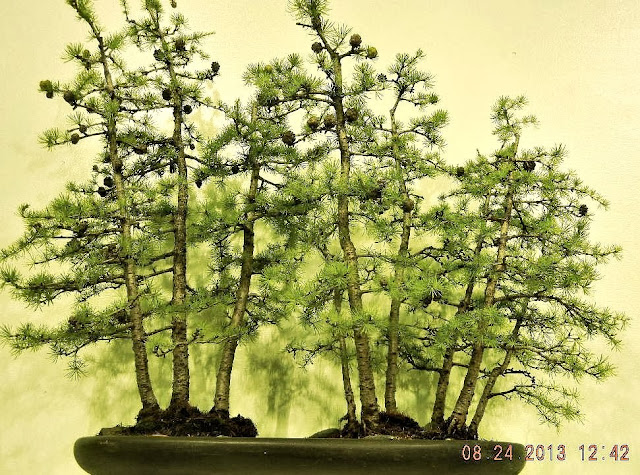 Our favorite was the miniature pine forest, with pinecones on the trees.
Of course, “Fair” means “food.” That’s another way the Fair is different this year than even five years ago — the dozen or more languages being spoken on the paths were reflected in many more choices of things to eat — tacos, yes, and corn on the cob, turkey legs, pulled pork, fried chicken. . . but also gyros, a booth devoted to Korean soup (Bi Bim Bop),Thai, Italian, Japanese, vegetarian. We were surprised to see no line at all at the funnel cakes — but plenty of people were still focused on eating their candy-sprinkle-laden chocolate-covered ice cream bars before they dripped irretrievably. 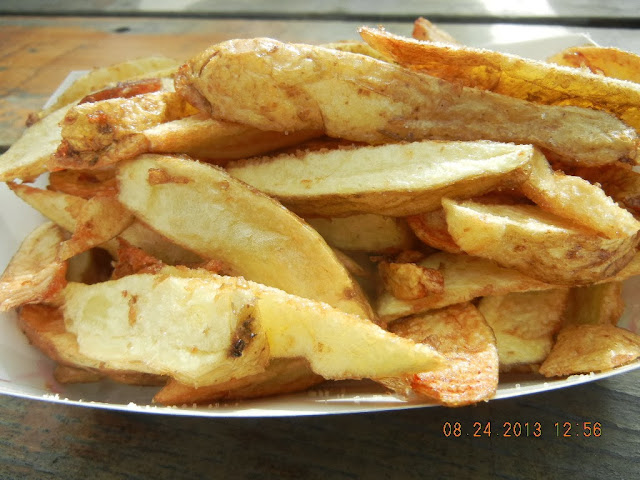 Our favorite, deep-fried peanut potatoes (called that because of their shape) from Bushes Bunches, provided lunch. We sat at a picnic table near the barn, enjoying the sun that had just arrived, and watching the crowds.
There was food to take home too — spices from around the world, honey, nuts, oils and vinegars, and fresh veggies. 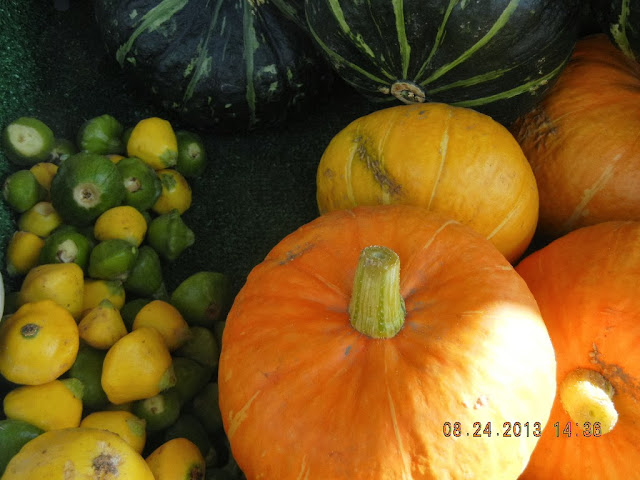 Local squashes at Bushes Bunches.
Once you’re well supplied with food, it’s time for the rides . . .  or not. Even if we were not eager to ride them, they’re essential to the ambiance of the day. 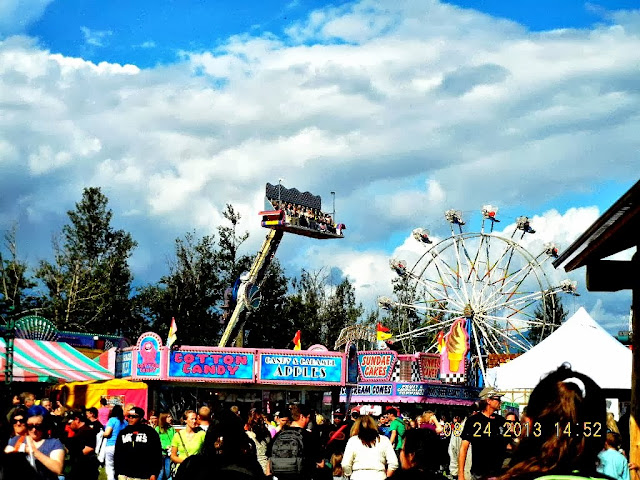 The Midway, Alaska State Fair, August 24, 2013. Looks pretty much like any midway at any fair in the United States in the past fifty years.
Besides the rides, and the food, and the shopping, and the people watching, there were dozens of performances. Groups of kids were clustered all over, in their costumes or warmup clothes, waiting to dance or cheer or sing. 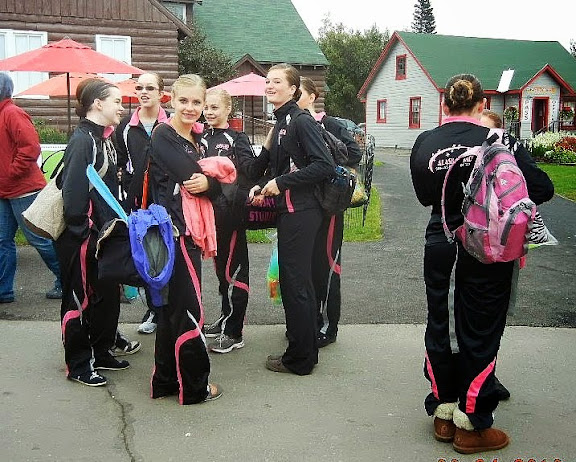 These girls were waiting around 11:30 for their act to go on at the Colony Stage. It was still gray and cool, so they’re dressed to stay warm.
And then there was the hall with clothes and crafts, where my siblings and I entered many exhibits in our 4-H days during the 1950s and ’60s. At some fairs, the clothes and handmade work don’t look much different in style from our entries. But much of what was being shown at the Alaska State Fair in 2013 would not have been imagined in earlier decades. One difference could be that the Alaska State Fair is open to exhibitors of all ages; our county fair was limited to people under the age of 21. 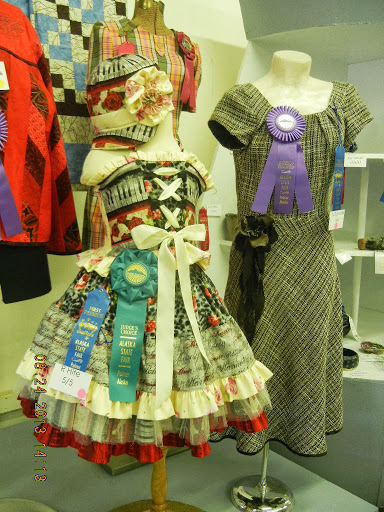 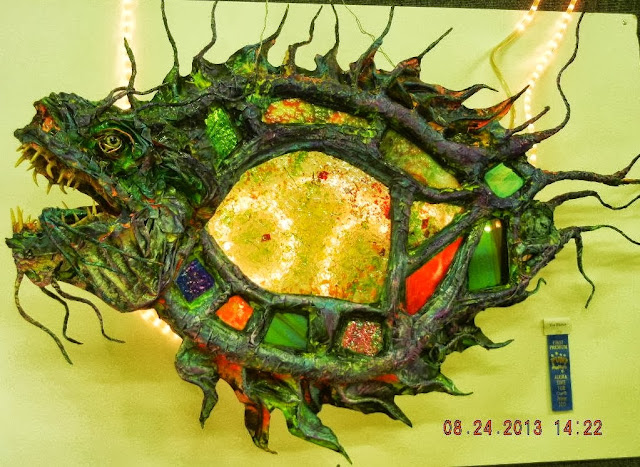 A fish for a wall, not found in nature. I would think twice about having him in the bedroom.
The Fairgrounds are noted for their flowers, and this year was no exception. 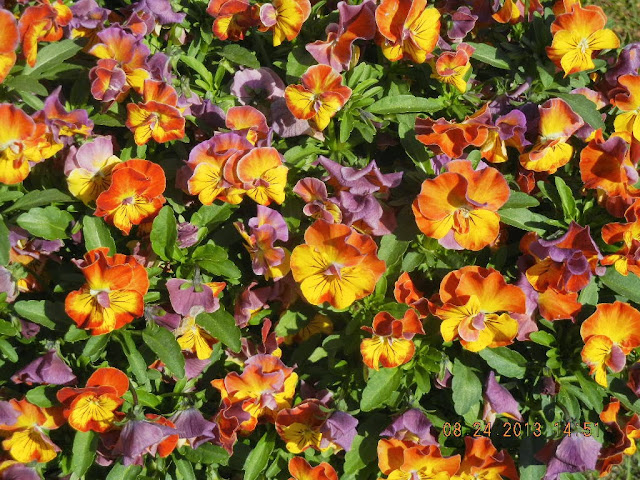 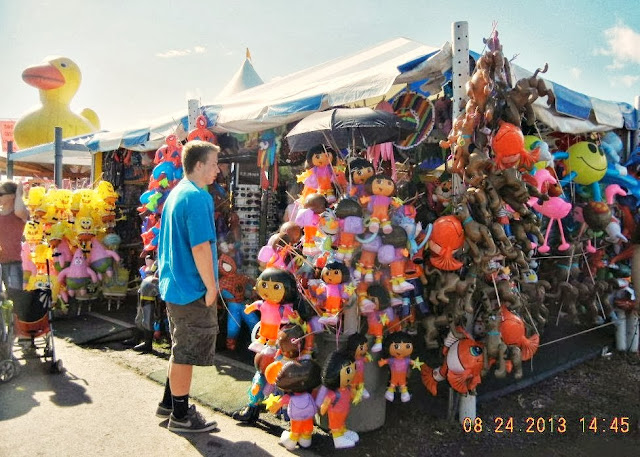 A final glimpse of the Fair, with all of its souvenir glories, in contrast to the views of mountains, water, and woods on the way home. 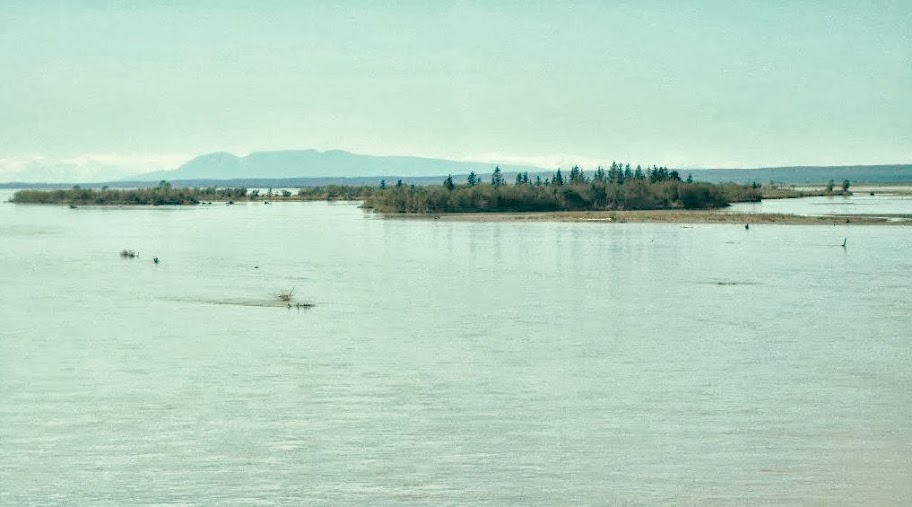 The Fairgrounds are a world unto themselves, with glimpses of mountains as a background for the rides and booths. The Knik River with Mt. Susitna in the background shows the other side of the state.