What to do with a sunny Saturday in Anchorage? It was the weekend for all of Anchorage’s Solstice celebrations — the downtown party, and the Mayor’s Midnight Sun Marathon, plus all of the regular summer activities — yard sales, farmers’ markets, the Downtown Market, and the things that people do when the sun shines and there’s no snow (we are still aware that a month ago we had an inch of snow on the ground). We drove to REI and parked the car there, with the intention of spending the day wandering from summer sight to summer sight.
Jim with his new backpack from REI, at a yard sale. From REI, we walked to the Spenard Farmers’ Market. We bought radishes (at $12/pound, as it turned out — they were small, deliciously spicy and very local, but pricey) from a charming young woman who had moved to Wasilla from Connecticut and become a farmer. We walked down Romig Hill to Westchester Lagoon.
Kayaker just putting in at Westchester Lagoon. Sunshine and mid-60s when we started, with a light breeze, and few clouds — close to perfect weather. Walking on the Chester Creek Trail for a short stretch we found that we were sharing it with runner/swalkers completing the Mayor’s Marathon. This was near noon, and they had started at 8:00 a.m., so the winners had long since arrived at the west end of the Park Strip. We headed there, with stops at City Market and Fire Island Bakeshop.
Grilling hot dogs outside City Market for customers [had to get the photo through the window so caught some reflections as well.]. Already, the fruit trees and MayDay (European Cherry) trees have dropped most of their petals in drifts at the sidewalk’s edge. The outdoor tables at Fire Island Rustic Bakeshop were filled; indoors, the tables stood empty, although a steady line of customers streamed through. 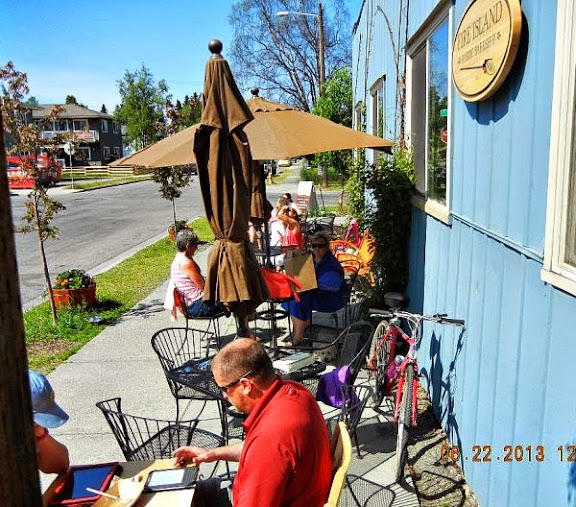 Another summer activity — cleaning the coolers. Getting ready to go fishing? at 1229 G Street. 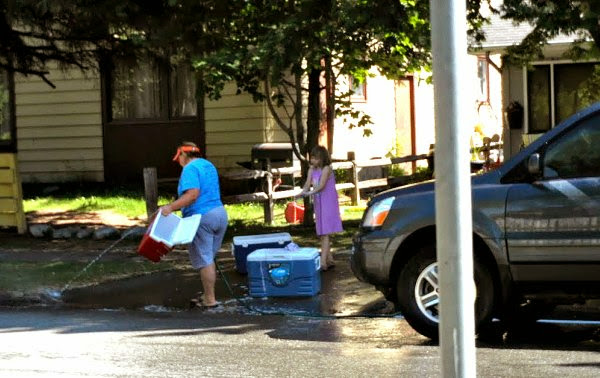 Guy in front of the Pioneer Home showing us his home-made solar-power system for his motorized scooter. He was waiting for his daughter to take him downtown to the Solstice celebration; we saw him there later happily making his way through the crowds. 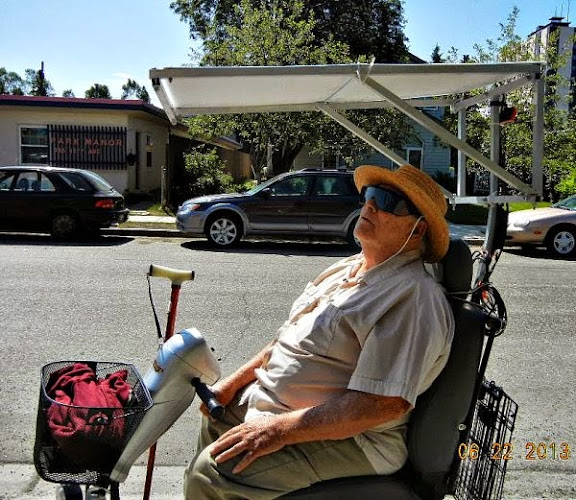 We came across a surprising number of apparently abandoned jackets, hoodies, socks, and other items on the Park Strip. Baby Kermit was probably lost, not abandoned. We left him there, trusting he would find a good home (if not his original one). 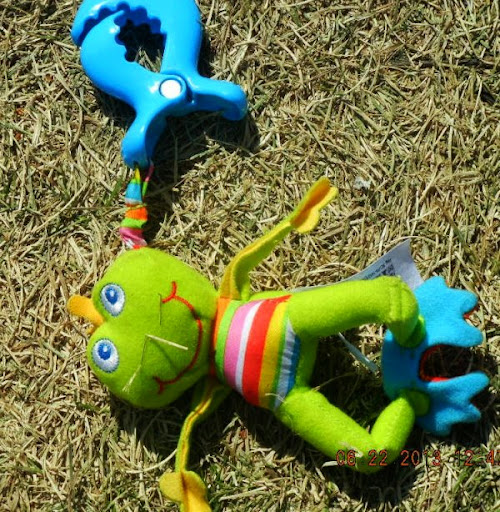 People from the marathon, with their bibs and finishers’ medals, walking down K Street to the Solstice Celebration on 4th Avenue. Those of you who know Anchorage will notice that to their left, a sizable hole has appeared. A building stood there for all the time that I’ve been in Anchorage, housing lawyers’ offices, Maharaja’s Restaurant in the early 1990s, and a few other things. The Hickels have wanted it for many years, and apparently finally acquired it and tore it down. We assume that a new tower for the Captain Cook Hotel will be going up soon. 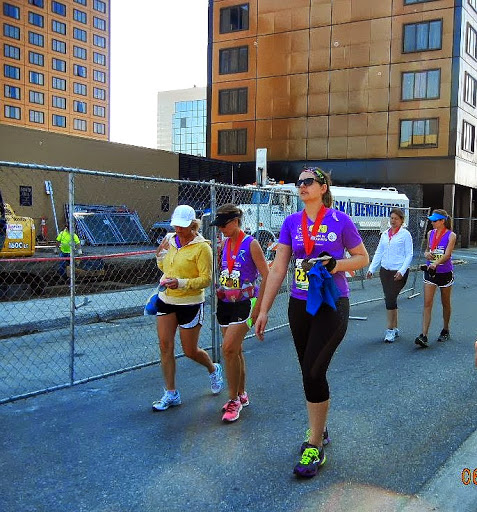 A different form of kayaking than we saw at Westchester Lagoon — a pool for kids filling much of the street in front of the Captain Cook hotel on 4th Avenue. A bubble machine in front of the Captain Cook — my biggest smile of the day. Lots of activities for kids at the west end of 4th Avenue. This is the Alaska Theatre of Youth booth with hula hoops. As we went east, the options grew more adult — first, a block of skateboard jumps and tricks for teenagers, then shiny old cars, then military teams competing in scooter races and an obstacle course, and at the eastern end at C Street, hard rock live music and a beer garden. Old car show in front of the Fourth Avenue Theater. Pretty amazing. They actually made cars like this. We must have ridden in them, but I don’t remember it. Picnic lunch — Fire Island mozzarella and sun-dried tomato foccacia, farmers’ market radishes and coffee for me. For Jim, a tin of sardines, some raisins, and a chocolate croissant. We found a picnic table at the corner of 4th and E where we could sit in the sun and watch the people. A small Native woman,with mismatched Indian earrings (nice ones), and neatly dressed, maybe in her 50s asked if she could sit there; we said, “sure.” After a bit, she started talking — she had lost her husband somewhere along the way. She was drunk, she said, although she sounded reasonably coherent. She was from Chevak, by way of Mesa, Arizona; it wasn’t clear where she lived now. She wanted to borrow my cell phone to call her mother in Chevak. I said no. We wished her well, and moved on — we offered to call Community Service Patrol if she wanted help, but she thought that she would  try to find her husband. 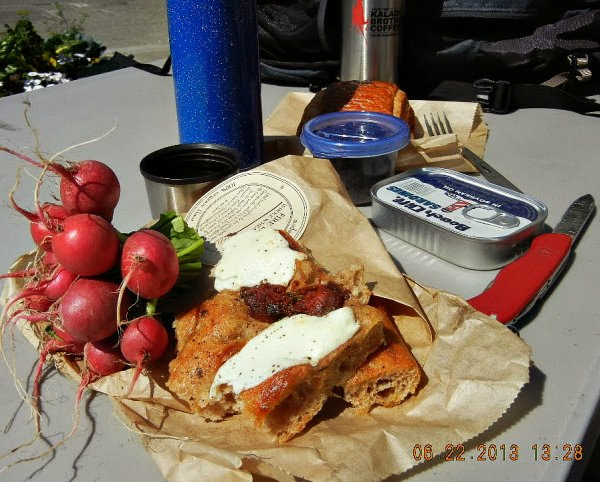 Man at a nearby picnic table, face lifted to the sun. 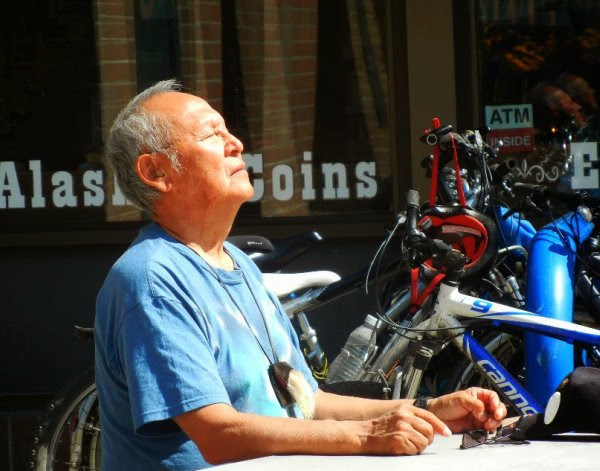 Woman sitting outside a shop modeling a guspuk. 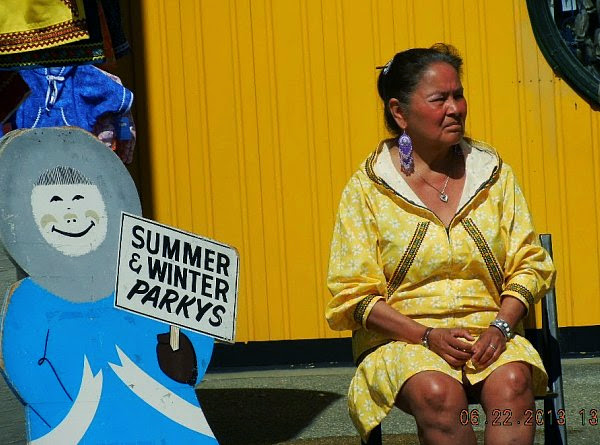 We continued on to the Saturday Market, where we found delicious chocolates for dessert, and  friends who took us around and introduced us to several of the vendors. Earlier in the day we saw another friend near Fire Island Bakeshop, and yet another one on 4th Avenue. Anchorage was presenting its best “small town” side for the day.
Happy couple at the downtown Saturday Market. We didn’t know them — they just summed up the brightness of the day. 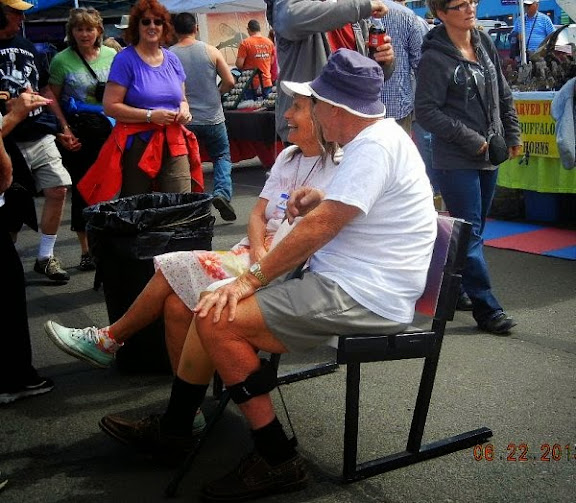 One cute dog photo. There were many dog photo ops, all day long, some cute, some adorable, and others large or strange. Definitely summer — dandelions gone to seed along a sidewalk on the way home. By 3:30 or so when we started to walk back to REI, the sky had clouded over, but the day stayed pleasant. 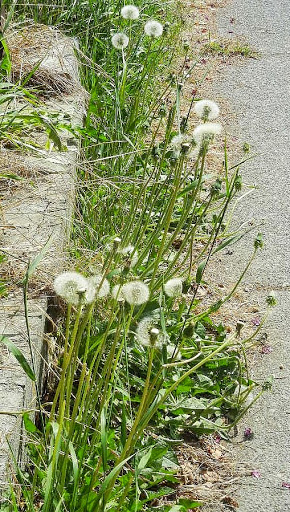 Back at the Northern Lights Center where we had parked, Jim napped in the car, and I spent some of our recently-acquired credit at Title Wave (from taking books in) to acquire a few new reads — an account of an American on the pilgrimage to Canterbury in England, recipes for foccacia, American regional food (a recent compilation of writings sponsored by the Federal Writers’ Project during the Depression years — the WPA sent people out all over the U.S. to collect recipes and write about local foods), and a 1960s book about how to see and draw written by a German with a charming sense of humor.
Altogether, the wanderings covered close to nine miles, and we felt that we spent our Solstice Saturday well. We hope that all of you had an equally delightful day, a portent of a wonderful summer to come.