Posted on October 16, 2012 by Road Trip Teri
There are several Villafrancas along the Camino Frances — it means “Town of the Franks” and referred to all of the people coming from France to get to Santiago. Tonight’s town is  Villfranca of the Bierzo region, which is hilly and agricultural. We’re seeing vineyards again, fruit tree orchards (apples and pears), and more variety of plants in gardens, from palm trees to rhododendrons (blooming now).
The town is impressive, only 5,000 people, but much more spread out than most of the towns we’ve been through. Like Ponferrada it has a big brown stone castle looking over the rivers that run along its edges — these are the first castles that we’ve seen, and they are in excellent shape, at least on the exterior. We haven’t the time or energy left at the end of the day to do more than snap a few shots as we trudge by. We’ve also seen more very modern houses, in both the suburbs of Ponferrada and here — largish fenced homes, often with vegetable gardens and fruit trees, but nothing that we would really identify as landscaping.
We put in another long day — Thursday the 13th was our post-Leon/hospital rest day. Friday the 14th, we walked 17 miles, to and around Rabanal. Saturday the 15th, was about 14 1/2 miles. Sunday the 16th we put in about 13 miles, and today Regina and I got in around 19 miles (we got three extra because we went out to hunt down dinner; Jim and Anthea stayed put at the hotel and found things to eat from our various stashes). Much of today was very pleasant walking, along pavement and often flat. The weather cooperated — overcast, with only a brief spell of afternoon sun. But the last stretch was mostly uphill, and it took an hour to get from the edge of Villafranca through town to our hotel on the other side. Admittedly, we spent some time on the bridge over the Rio Valcarce talking with Chad from Ireland, and one of his buddies. The buddy will meet his girlfriend in a few days in Sarria, we learned, and they will walk from Santiago. From there, they will take the bus to Finisterre (“the end of the earth”), and he will offer her the engagement ring that he bought in Burgos. It actually seems sort of reasonable — if they’re still speaking after walking 100 km in a week, maybe they’ll do fine married.
We saw plenty of interesting sights along the way. One of the most charming was a peregrino with a tiny black kitten. She didn’t speak a lot of English, but seems that she had found it along the way. Its mother was dead, and the woman adopted it and is taking it to Santiago — and I guess back home (wherever that is). It’s small and portable, and luckily there weren’t any more or the Carns family might have been tempted to acquire a new kitten too. We don’t see much in the way of wildlife — a squirrel or two, and birds. Now and then a lizard scurries across our paths; Regina is best at spotting them.

When we checked into the hotel this afternoon, the old gentleman at reception indicated to us that we had to go around to the bar in order to pay the bill. He walked down the street with us to the bar which was classic Spanish — at a small table next to the door, four older men were playing cards. A couple of other groups of men were watching futball on TV, more groups were standing at the bar talking to each other, and the two women in the place were waiting on them. Our old guy joined one of the groups, and left one of the women to the task of making note of my passport and running the credit card. Later in the evening (around 9:00) when we were walking home, Regina pondered the question of why we see so many clusters of old guys in Spain, hanging out at the bars or on benches, and why that doesn’t happen in the U.S.

Tomorrow is another pretty long day because we couldn’t find a hotel in the closer towns. But that means that from Herrerias, we will have only about 8 1/2 km (and 2,035 feet) to get to the top of O’Cebrerio.
A political sign lying on a sidewalk in Ponferrada — loosely translated, it says, “no budget cuts!.”

A stork’s nest in Fuentes Nueves. An Aussie with whom we were walking said that at times, the churches put poles near bell towers to encourage storks to nest because they keep other birds away that might damage the church bells. This nest may have been abandoned; a couple of dozen non-stork birds were calling it home and flew in and out making quite a racket all the while.

A mother cat and two kittens at home on a hot tile roof.

An ad for a school that teaches traditional Spanish music — Galicia (we’ll be there soon) is Celtic, and has bagpipers, which we hope to hear.

We are back among the vineyards for a while.

A billboard advertising a hotel and services for pilgrims, including parking for vehicles and bikes. The breakfast delights include loin (a cut of pork), toasted (which probably means toast), and white coffee (i.e., coffee with milk — which is the default here. If you don’t want milk in your coffee, you have to specify upfront and very clearly that you want it black. Also, most vegetable sandwiches and salads include tuna fish; again, if you don’t want it you have to specify). 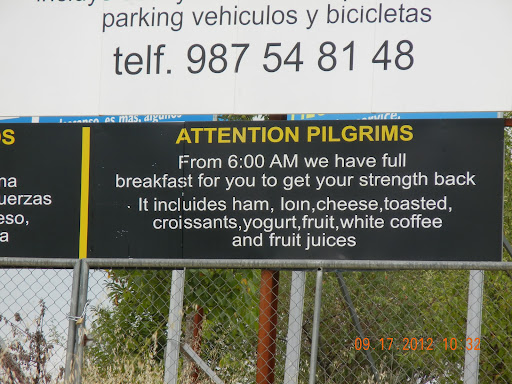 A tree trunk  in a restaurant courtyard entirely covered with little crocheted things.

An old wine press carved from oak, in Camponaraya (I think).

A diagram of how the wine press worked.

An ad for a hotel in a town that we will pass through tomorrow, suggesting that you take a break there before starting up O’Cebrerio like the unhappy pilgrim at the lest side of the picture.

An encounter in the streets of Cacabelos between a car and a truck. People were trying to lift the car and move it the two inches needed for the truck to get clear.

Another close encounter between a car and a farm vehicle, in the streets of Villafranca. The castle is the brown thing in the background wearing a conical roof.

At the entrance to Villafranca an enterprising homeowner had set up a vending machine with Coke and beer. Anthea has a smile and a cold beer.

A view of the scenery. Mountains do make for gorgeous vistas.