A street cleaner’s broom, in Villafranca.

The road sign for Pereje. We think that the replacement of the “J” with an “X” is a statement by the Basque separatists. Earlier in the trip (in and closer to Basque country) we saw much more graffiti urging Basque independence.

A view down to the rio Pereje from the Camino.  Fishing is allowed in parts of the rivers – some areas specify catch and release; one spot wanted only artificial flies.

The old highway, now little used, and with concrete barriers walling off the shoulder for the Camino users.  The terrain on the left, with the river and the lush green reminded us of Western Washington, while across the road the rock faces  and scrub lands going up the mountainsides more resembled eastern Washington.

We go under the new freeway, the N-VI.

A large garden and an isolated house by the rio Pereje — very unusual to see a house out in the country by itself. 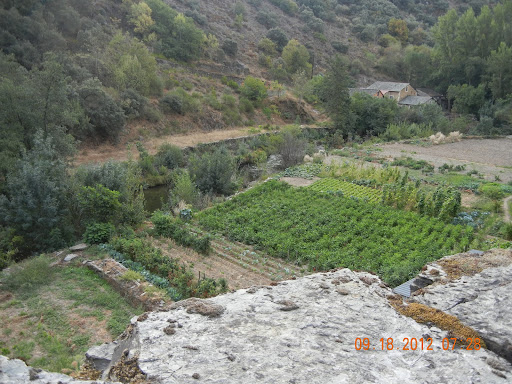 A cat, uninterested in portraiture.