Posted on October 16, 2012 by Road Trip Teri
Another awkward night for the Internet — we’ll see what we can get finished before the hotel bar closes or the whole thing cuts out entirely. No wi-fi in the rooms, despite assurances that there was (but even hotels in the U.S. that tell you you’ve paid for Internet in your room often enough don’t actually provide it).
We walked downhill from El Acebo (the small mountain town with the beautiful B&B (casa rural, in Spain)) to Ponferrada (means Iron Bridge), at one time a large Roman city that was important for iron and gold mining. From El Acebo down the mountain to the town of Molinaseca where we met Regina and Anthea for lunch was mostly treacherous rock with pebbles, stones and dust added to decrease the security of footing. Part of the section was designated “very difficult,” the rest was merely garden variety treacherous. Luckily the weather was overcast and in the low 70s for much of the day, making that aspect of walking pleasant.
I may have made this complaint before, and I may make it again. It seems highly unlikely that medieval pilgrims would have gone along these isolated paths through fields and woods — today’s trail was wilderness, with woods and no fields or sign of people for long stretches. They would have been too subject to attacks by bandits, and besides there were  (and are) actual good roads to take instead. One of my projects when I have time will be to match up traditional Camino routes with the routes designated today. The “rustic paths” do keep peregrinos off the roads making them safer for auto traffic. I am awed by the fact that just this year 10s of 1000s of people have already gone down these same difficult trails, knowing that many of them were in worse shape than me.
At any rate, we survived, and were pleased that most of the route between Molinaseca and Ponferrada was paved sidewalk and road. Two brief encounters: We saw a girl ahead who appeared to be favoring her feet. She stopped, and we stopped; she said she had bad blisters and that her feet were very painful. I was ready for a break, and pulled out the chocolate to share, which was well received. A little later, as we stood in a small plaza looking for street signs (which in Europe are often cunningly hidden or simply non-existent), a couple of peregrinos walked up and asked if they could help us. We chatted a bit, and the guy said to Jim, apropos of nothing, “So how old are you? 80?” His wife said, “Oh no! He’s not 80!” The guy said, “Oh, are you 40?” Jim laughed, and said, “We’re in our 60s.” I asked about his wife’s small bunch of green — “Is that rosemary?” They said yes, and gave me the name in Portugese, and a sprig to carry with me. I asked if she cooked with it at home, and they said yes; “We are John and Anna and when you come to Lisbon we will cook you something with it.” So when I go to Lisbon, I’ll try to find John and Anna . . .
After that, we found our hotel, discovered that the kids had arrived before us, made our evening plans, did our laundry and showers, got a little rest. We headed out about 6:30, walked down to the Pharmacia by the river to get Tylenol and bandaids, looked around in the plazas for a dinner spot, took some photos of the Templars’ castle that dominates the town (usually the churches get that position), and went for pizza. But — ahh, what pizza — real veggies on it — zucchini, capers, red peppers, artichokes, onions (everything in Spain has onions). A good tomato sauce, some parmesan cheese, a nice thin crust — pizza that someone made from scratch, not a box. And ravioli, with a ravishing tomato sauce and a bit of pesto, and plenty of olive oil — the best meal we’ve had this trip. For dessert, Regina ordered whiskey tart (she and Anthea agreed —  not enough whiskey). Anthea ordered Nutella pizza, which the two of them ate while discussing what else it needed — chocolate shavings? chopped salted nuts? whipped cream? All of the above? I have food fantasies — sitting at Spenard Roadhouse with a double order of their various veggies in front of me. Bear Tooth pizza. Orso’s various offerings. Tutta Bella flatbread (in Seattle). The food in Spain will not be the reason I come back, although if there were a few more places like this evening, it might help.
Tomorrow we walk to Villafranca de Bierzo; the next day, to Vega del Valcarce, and then up to O’Cerbrerio — one of the big challenges of the trip, at 4,300 feet. And then we will take a bus to Sarria to meet my sister Peg and her husband Tom on September 20.
Sheep, and a man pruning trees on a Sunday morning in downtown Riegos (population, maybe 50). We went through Riegos on our way downhill from Acebo to Molinaseca. 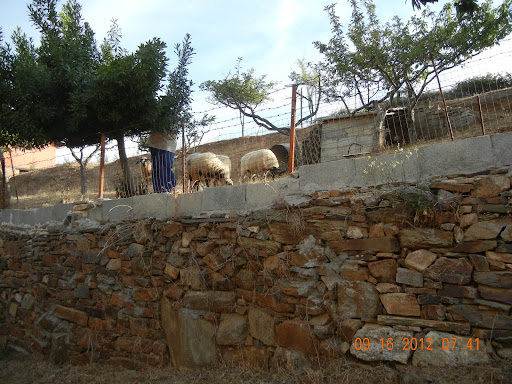 A grove of very old chestnut trees, partway down the hill between El Acebo and Molinaseca. 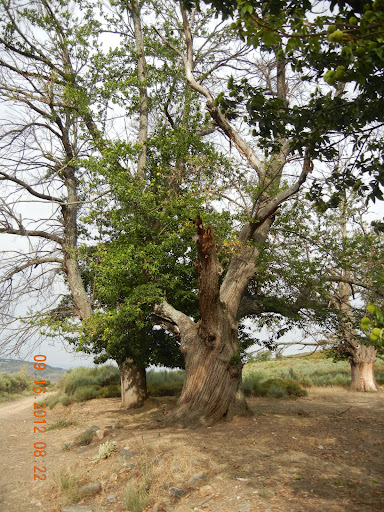 Trumpet vine in one of the small towns along the way. 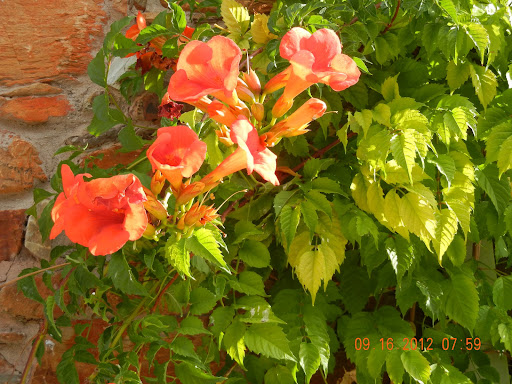 An urban rooster near the church in Molinaseca. 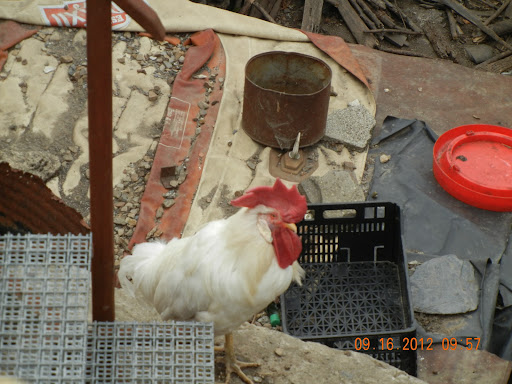 Exposed construction in Molinaseca — they just don’t build places like this any more. 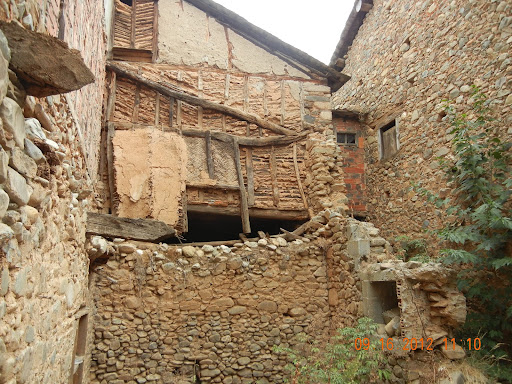 The guidebook says that these balconies are typical of the houses of this region. This one looks very old; many (even on the older houses) are much newer and look more securely attached. 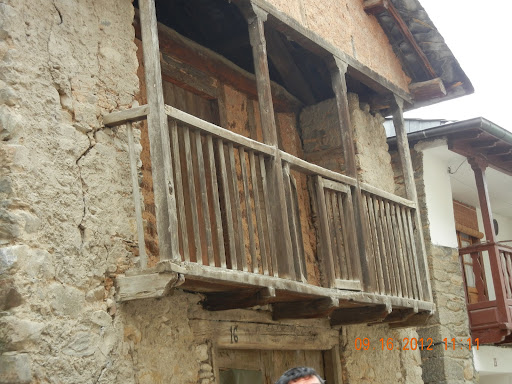 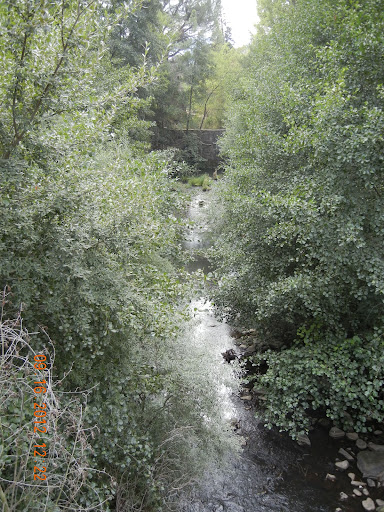 The Templar castle in Ponferrada. 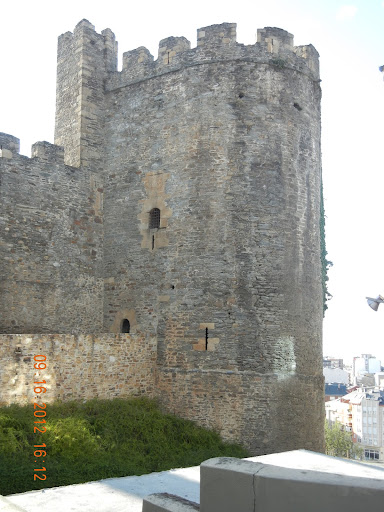 There’s more, but the bar’s Internet seems to have decided to quit for the evening.