I got to wondering about whether anyone had tried to grow wheat in space. People who are raised with wheat are often so attached to it that they will try to grow it even under the worst of conditions. And what could be worse than space, where there’s hardly any room for plants, let alone “amber waves of grain?” 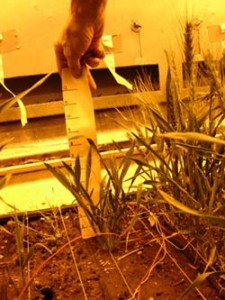 Photo from Biosphere.org, showing wheat from the space station Mir (on the left), and control plants grown on earth (to the right).

But yes, people early on in the space adventure started to hybridize wheat that would grow in space stations.  The most successful variety from the mid-1990s is called “Apogee,” and grows hydroponically or in a soilless medium that supports its roots, under artificial light, ripens fast (one source says 23 days), and thrives in the high carbon dioxide levels found in the closed quarters of space stations. Not surprisingly, given the great symbolic value that humans place on wheat, it was one of the first two crops to be grown entirely in space.

An article about growing wheat in the Russian space station, Mir, in the mid-1990s pointed out that some crop failures were due to the equipment such as the lights, breaking. The next crop, grown with functioning equipment produced plenty of seeds, but they were sterile. For eating, this isn’t a problem, but if the goal is a sustainable food system in the space station, the seeds would have to be fertile to provide for continuing series of crops. A followup study found evidence to suggest that too much ethylene in the environment kept the seeds from being fertile. And the photo above, from 2005 shows third-generation plants from the Mir station growing in a lab on earth, so the fertility question was solved in short order.

Photo of Apogee and Perigee (shorter), both from Utah State University where they were developed.

Another article about space farming from 2003 points out that farmers will have to consider the effects of gravity in plant growth — something that would never occur to most earth-bound farmers because a hundred million years of grasses growing on the planet have solved most of the problems of water transport in plants. Gravity also affects the “movement of heat, water vapor, CO2 and O2 between plant surfaces and their environment.”

All of earth’s plants grow in relationship to microbes — bacteria, yeasts, and fungi — in the environment, and depend on those relationships for health. Wheat is no exception. Creating and maintaining  those relationships in healthy balance in the artificial environment of a space station or a Moon or Mars colony is the topic of other studies. Another factor for many plants in space is whether they need insects for pollination — wheat, like other grasses, has the advantage of being self-pollinating.

Great – it grows in space — what about on Earth? Yes, as a matter of fact, the developer of Apogee, Dr. Bruce Bugbee at Utah State University, gave a about the advantages for using the wheat here, and growing it hydroponically.

A 1996 NASA article about Apogee was enthusiastic about its usefulness in making bread — it works on earth, but baking bread in space had yet to be tried at the time of the article. The plant is a dwarf spring hard red wheat, in the family of wheats often used for bread because of their high gluten content. NASA scientist Doug Ming, quoted in the article, said that Apogee’s short height makes it hard to harvest using contemporary machinery, and also creates problems with controlling weeds. Neither of these things are issues in the space station or a lab.

NASA continues to experiment with growing Apogee in space, with control plants grown on earth in identical conditions. A July, 2016 paper found some differences in the thickness of leaves and other characteristics of the space-grown plants, but no significant differences in yield. Food quality was a different matter — tests on Apogee at Rutgers in 2002 to see how well the cookies, noodles, and bread made with it turned out found that all of the foods fell short of ideal, but were edible. Nonetheless, Apogee wheat may be the forerunner of the next Green Revolution on earth, showing ways to respond to climate change, limited water supplies, and increasing populations and still provide one of the most ancient of foods to billions of people who rely on it today.

This entry was posted in 2019, Food journeys, Wheatavore. Bookmark the permalink.