Beaten Biscuits: The Sound of the South 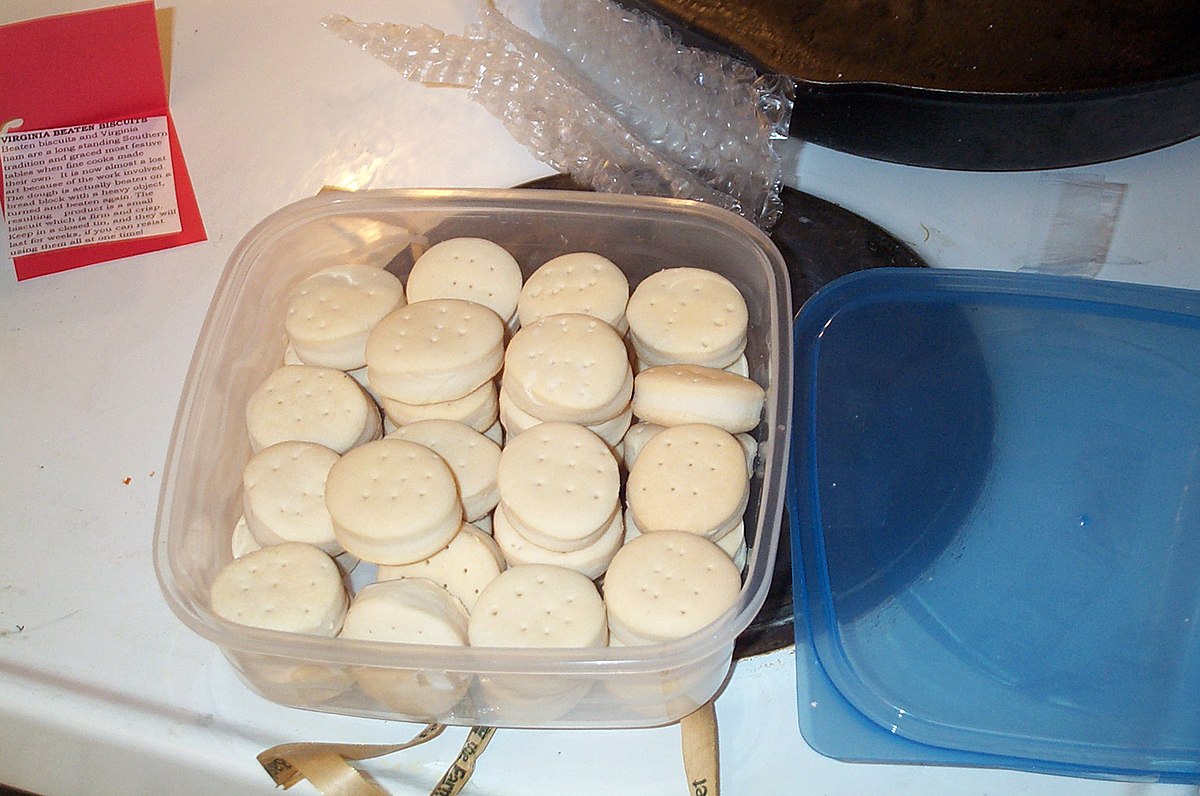 Are they a holdover of slave days, something that no one in their right mind would voluntarily make? Are they a delicacy well worth every stroke of beating that goes into them? Dedicated cooks take the time and hard work to make the beaten biscuits of the Old South because there is nothing else like them. Firm, crispy, described as a cross between hardtack and a flaky, layered cracker, some insist that they are the only proper thing to serve with ham and gravy.

People who eat wheat have sought ways to get airy light breads since the first day they ate a flatbread puffed up from the steam released in cooking. Using yeast gave them wheat breads that expanded well beyond any other mechanism they had discovered. But yeast can be unreliable, or unavailable because the starter died. Cooks began to use pearlash (potassium carbonate, made from burnt wood) to leaven cakes in the late 1700s, and baking powder really took hold in the mid-1800s.

In the southern United States, another way was to get a lighter bread was to beat it. Beating the dough, rather than kneading it, brings air in while destroying most of the gluten strands. “By working them [the gluten strands] over and over and severing the stands constantly and then emulsifying them with a fat to keep them shortened, you can achieve a tender product without the aid of chemical liveners . . . In a beaten biscuit [often called Maryland Biscuits] the lightening of the dough was a result of the emulsification of the fat into the flour by beating it repeatedly over time.” Sufficient battering of the dough made it smooth and elastic, with pockets of trapped air. This technique seems to have been rarely if ever used outside the southeast United States, where it is first mentioned in Colonial recipes (e.g., Martha Washington).

Although the invention of chemical leaveners at the end of the 18th century changed by biscuit landscape by the mid-to-late 1800s, people in the south still make beaten biscuits. A writer for the Depression-era Federal Writers’ Project recorded one recipe: “[T]ake:–1 ½ pints of flour, 1 teaspoon salt, 1 tablespoon lard. Add salt to flour and blend thoroughly with lard. Three gills of milk and water—half and half—to be added slowly with a stingy hand, for the dough must be very stiff. Knead for 5 minutes and beat with a hatchet for 30 minutes. Form into small biscuit and prick on top with a fork. Bake in moderate oven for 20 minutes.”

Cover of a Texas cookbook prepared for the America Eats! project, with a recipe for beaten biscuits

The sound of people beating biscuits was one of their distinctive features, particularly before breakfast. “One man recalls the sound of the cook beating biscuits with the nose of a hammer, out on a tree stump behind the kitchen. The flat of an axe, the heel of a sad iron, the heel of your hand.” Other recipes advised an iron mallet, a rolling pin, a club, and “iron (never use wood).”

One reason for beaten biscuits staying in the South might be that only low-gluten wheat grew well in that climate. Although gluten is essential to beaten biscuits, using low-gluten flour makes it easier to achieve the desired light texture, without the gluten strands forming so tightly that they make the biscuits tough. White Lily is the best known of the flours milled from soft white winter wheats; Martha White and Gladiola are others (some cooks substitute all-purpose flour, with more resting time before beginning to work it).

Mary Randolph has the first recorded recipe for beaten biscuits in her 1824 book, Virginia Housewife. She calls them “Apoquinminc Cakes.” Another source refers to them by this name, and says that the local Indians taught settlers that technique for make bread that would travel well. No other sources that suggest that Southeast U.S. tribes (Algonquins and others) used that method of making bread from corn or acorns, their main bread ingredients. It is not a European technique either, leaving the question of who developed the technique unanswered.

Their history is inextricably associated with class, and with hard labor. Many people who ate them regularly had slaves or servants to prepare them. In one situation, social workers enforced their use by people in Appalachia who needed food relief. Because corn grew in home gardens in Appalachia at the turn of the century, people often ate cornbread rather than wheat breads for which they would have had to buy flour. “‘Cornbread was easy and quick. . . . You could literally cook it on a hoe outdoors.’” Government workers believed (on the basis of some evidence) that relying on corn led to pellagra and other diseases. They encouraged women to make beaten biscuits, which they viewed as nutritious, rather than any other form of wheat bread, sentencing them to hours of more hard labor every day.

Could African slaves have brought the technique? Or sailors? Some sources describe beaten biscuits as a direct descendant of hardtack. However, hardtack was made without oils of any sort, so that it would last longer, and no one ever described it as tasty.

One other mention of beating a flour dough appears in a recipe from Martha Washington’s Book of Cookery that describes a “sugar biscuit” or cookie made with a similar technique. It calls for the cook to “mix it [flour, butter, sugar, pearlash (for leavening), brandy, caraway seeds, and water] thoroughly, till it becomes a lump of dough. Flour your paste-board and lay the dough on it. Knead it very well. Divide it into eight or ten pieces, and knead each piece separately. Then put them all together, and knead them very well in one lump. Cut the dough in half, and roll it out into sheets, about half an inch thick. Beat the sheets of dough very hard, on both sides, with the rolling-pin.”

Mechanization came to the beaten biscuit around 1870, with the creation of the biscuit-break. “The biscuit break was a machine that rolled the dough through hand cranked rollers much like a pasta machine. The use of a meat grinder is sometimes mentioned in recipes as a way of shortening the beating process of this dish as well.” Recipes for beaten biscuits today substitute food processors for the axe handles. 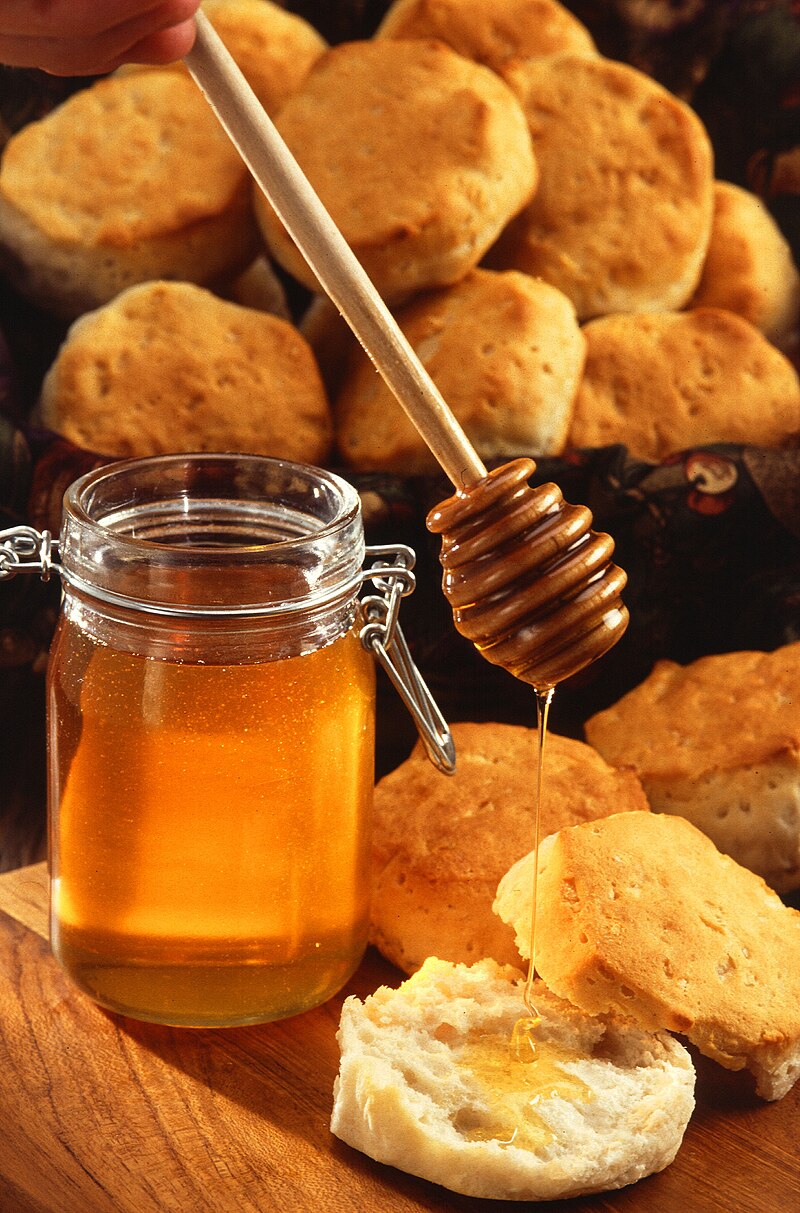 More important, baking powder allowed everyone to make lighter biscuits. Even though they have a much different texture than beaten biscuits, they quickly became popular. Today beaten biscuits are a culinary curiosity found mostly in specialized cookbooks.

Addendum: a compendium of biscuits

Beaten biscuits: Firm, crispy layers, requiring a half hour or more of labor to prepare, and 20 to 30 minutes to cook. Several sources describe these as the grandchildren of  “ship’s biscuits,” or hard tack. [Hard tack was never made with oil or shortening because those would have gone rancid and hard tack was designed to last for years. It  derived its rock-hard texture from multiple bakings.]

Flaky buttermilk biscuits: Layers of chilled dough and chilled butter, folded and rolled multiple times, like a puff pastry. These are leavened with baking powder and buttermilk. These are more labor-intensive than dropped or rolled biscuits, but considerably less demanding than beaten biscuits.

Drop biscuits: Cousin to a scone (scones typically have more sugar, and an egg), drop biscuits use the pie crust technique of cutting cold butter or shortening into dry ingredients, mixing quickly with milk or water, kneading lightly, and shaping. They are the opposite of the beaten biscuits or flaky buttermilk biscuits – minimal handling is ideal.

Cream biscuit: A drop biscuit relying on heavy cream instead of butter to provide the fat that is one of the defining characteristic of biscuits. As simple as it gets without a boxed mix.

Box biscuits, store-bought biscuits: Today, biscuits come in dried mixes (just add water or milk), and in tubes of pre-made refrigerated dough (also known as canned biscuits), as well as frozen. The invention of baking powder changed the biscuit scene forever. Boxed mixes incorporating shortening that wouldn’t go rancid changed it even further. Pillsbury’s pre-made biscuit dough in a can made biscuits virtually instant except for the baking. No one has yet figured out how to make a tasty biscuit that can live on a shelf in plastic wrap, but the day is likely coming.

Jed Portman, “The Art of the Beaten Biscuit,” Garden and Gun, April 29, 2015, gardenandgun.com/recipe/the-art-of-the-beaten-biscuit/