It’s been several days since there was time to sort through pictures and impressions from the hours and places that we’ve been. This is a summary of the riches.

Even in the drought, dew still forms on the grass in LA — morning shadows and sunshine on the way up the hill to Antioch. 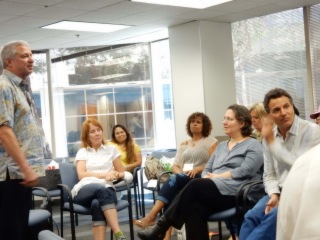 At the end-of-residency lunch, Steve Heller (chair of the MFA program) speaks to students and faculty. The relaxed atmosphere is typical of Antioch, and one of its many appeals. Other faculty include (left to right) Bernadette Murphy, (unidentified woman in gold shirt), Erin Aubrey Kaplan, Jennifer Factor, and Peter Selgin. 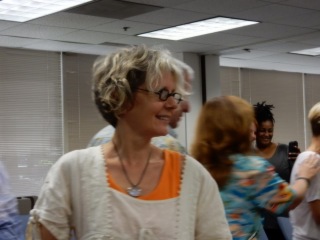 My “buddy,” Constanze Frei, a gifted person and fascinating writer who has been a treasure of information and support during these first weeks as a student.

A cardboard cutout of a he-man at the LAX airport bookstore, juxtaposed with rows of women’s magazines.

Unexpected at LAX — a tin bucket filled with sunflowers; and

The airplane’s windshield gets cleaned just like yours does.

Here’s one of the great things about Seattle — on the street where Anthea lives, a palm tree, and

fireweed, both in front of the same house. 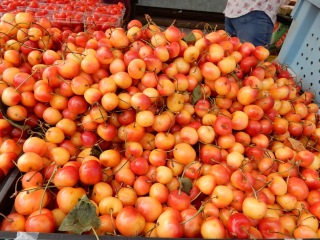 We spent the day, at Jim’s request, mostly seeking out ice cream and hanging out at the Ballard Locks. We started however, with a stop at the Pike Street Market, for fruit at Sosio’s, and pastries at Le Panier..

The first gelato haven provided a variety of fruit and chocolate flavors (sorry — I didn’t write down the name, but can find it out if needed)..

After that, Jim headed off on his own, and Anthea and I helped Regina choose a hat. In Finland, all people who earn a PhD are given a tophat and a sword. We went to Bernie Utz’s on Union Street to try on tophats. 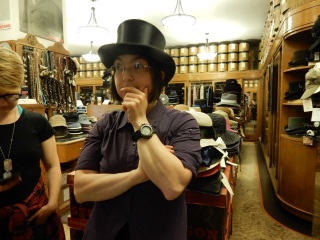 Regina contemplates the foldable, $450 tailors’ silk tophat. The very excellent salesman said that it was a high-maintenance item — can only hold it by the brim (otherwise it accumulates fingerprints), and it doesn’t do well in rain — not a good hat for Seattle, or for a glaciologist.

We ended up with this one – more of a fedora, made of fur felt, with interchangeable hat bands and feather decor, and wearable almost everywhere. The “sword” will be a glaciologist’s knife (haven’t seen it yet, so don’t know what distinguishes it from all other knives). 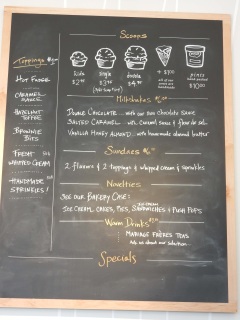 Did not get the name of the second gelato place either, but did get delicious gelato.

At the Ballard Locks, we got the end of a Fathers’ Day Pipe Band concert (they are marching out),

seals swimming in the locks (some were dark; this one was spotted),

a parrot to sit on Anthea’s arm (part of the Fathers’ Day festivities for some reason),

and plenty of ships and boats to watch as they waited for the water to sink or rise and get them through the locks. Regina and Deke have done this a few times on the UW sailboats that they rent. Regina explained that the boats tie up to each other so that they go through the locks together — safer for all. The water is nearly out, as you can see by the light area at the top, and the green algae on the lower part of the wall. We finished out the day with an early dinner at Tutta Bella pizza in Wallingford, but no-one was able to eat more than one scoop of gelato by that time so we had to skip the tiramisu. Next time.

Monday we walked along Ship Creek — saw this week’s cruise ship, a barge, and a cargo plane going in to land at the Air Force base.

People have been catching king salmon for the past couple of weeks. This guy said it was his first ever.

Upstream near the dam and fish ladder, a rope across the creek marks the limit for fishing. It has acquired quite a few lures and lines this summer.

It’s cottonwood season, when the fluff that gives the trees their name

falls and gathers in clumps among the weeds at edges of sidewalks and streets. 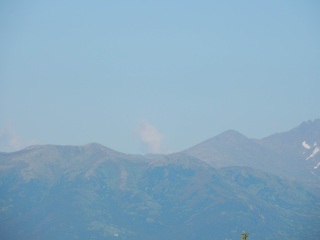 For the first few days, the air was hazy from the wildfires burning all around Anchorage, in the Mat-Su Valley and on the Kenai Peninsula.

Yesterday (June 24) we walked around Lake Spenard. Our favorite sight — mother duck with seventeen ducklings (or thereabouts). We think that they couldn’t all be hers — either she’s babysitting, or has adopted several other families.

Elodea, a water weed used in home aquariums has gotten into the lake. It’s dangerous for the planes, as well as fast-growing and likely to choke out much of the native life. We saw a research boat on the lake, as well as this craft, which appeared to be breaking up mats of other water weeds. 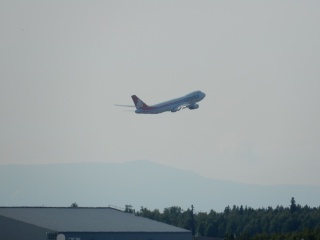 The smoke persisted yesterday — you can barely make out Mt. Susitna below the plane taking off from Anchorage International.

An odd wetlands area along the bike trail was occupied by a mother mallard and two half-grown ducks.

Many of the small cabins around the lake that hold equipment and supplies for the float/ski planes are neatly kept, with green lawns and flowers.

Today (June 25), we went back along Ship Creek. The military forces have been carrying out exercises for the past few days, with many more jets flying than usual. 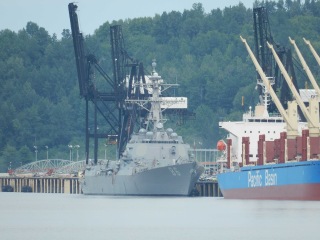 and a Navy ship in the port, along with a more ordinary barge.

People are still catching fish — we watched this guy pull his in, and haul it up to show it off to his friends. 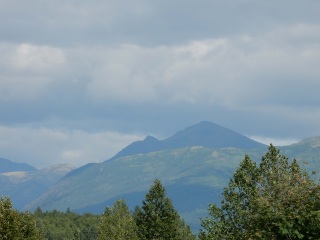 The air is much clearer today, at least to the east (notice, no snow on those peaks),

and the flowers are vivid.

Post script: One of my favorite quotes for the week came from Anthea — “If you have a chair in your bedroom, put something on it before you go to sleep. Otherwise, you may wake up and find something in it that you didn’t expect.” It’s a 31-word horror story, guaranteed to persuade you to put something on your chair.

After six straight days of intense attention to studies, it was time for a short break. Jim and I drove to Santa Monica for an interlude at the National Council of Jewish Women Thrift  Shop there, an all-time favorite. The staff people are a delight, they have great stuff, and lots of it. Then a quick lunch at home (aka hotel), a class on using Word to format papers for Antioch, and we were off to South Pasadena to meet a nephew and his wife for dinner at the Farmers Market.

Hazy San Bernadino Mountains on the way to South Pasadena. There are forest fires burning here, as there are in Alaska north and south of Anchorage, but today’s haze was probably due to the atmosphere and not smoke.

An important feature of travel in LA today, especially on the west side of the city (our side), was that President Obama was visiting. That meant that numerous roads and freeway sections were either closed, or limited in access. We took the coward’s way out, and headed to South Pasadena without taking any freeways. That worked fine, and we kept assuring ourselves that it was just as fast as the freeways would have been. Except that we got lost in South Pasadena and took as extra 45 minutes to go about five miles. That’s life in LA.  Yes, we had maps and smartphones, but there were two intersections of Meridian Street and Mission, both close to train tracks, and both near Fremont.

But — life is good. We parked directly in front of Buster’s Cafe on Mission Street, across from the Market, and had one of the best-ever chocolate milk shakes with espresso.

People on the lawn across from the South Pasadena Historical Museum on Meridian Avenue. 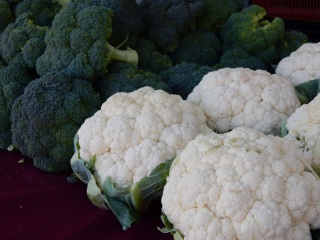 Wares at the Market — broccoli and cauliflower,

fresh figs (you know I bought a box of those, and we shared them for dinner), 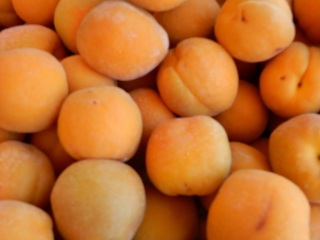 We stopped in at the Museum, and took a look at the photos and artifacts from the ostrich farming days early in South Pasadena’s history.

The Cawston Ostrich Farm (apparently the only one) had many thousands of ostriches, whose feathers were plucked by the millions in the 1890s for hats, boas, and other feather decorations. The eggs were used to make curios, but the birds themselves weren’t eaten. 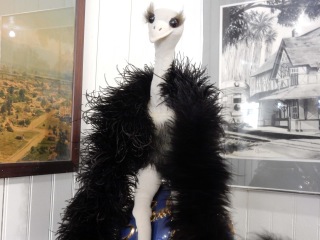 The volunteer who showed us around claimed that this boa was a hundred years old. 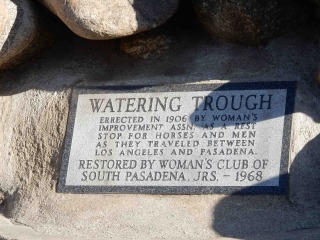 Near the museum was a stone structure with a memorial plaque. 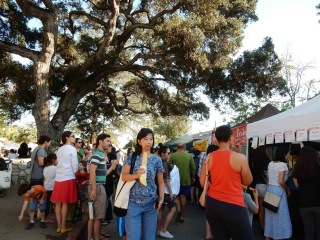 Long lines for dinners — tamales, sushi, crepes, corn on the cob (Joe, a true Iowan, started with that for an appetizer), and more. We bought food from the various vendors, 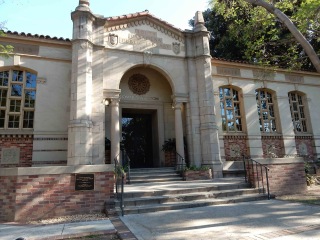 and found a shady spot on the lawn in front of the South Pasadena Public Library for a picnic dinner.

A market basket with flowers, carrots, and more. After dinner we split up, Joe and Jen to shop, and us to begin the long journey back to Culver City.

We stopped briefly to listen to a band that had settled in — small boy on the drums, an accordion, a keyboard, and a bass fiddle. Behind the band is a twelve-foot (?) high metal sculpture of a striding man.

On the way west, the sky settled into sunset and then dusk, with a crescent moon.