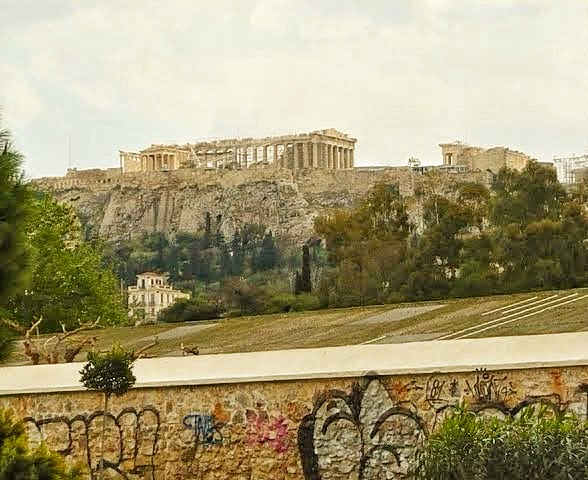 A graffitied wall, and the Parthenon on the Acropolis.

“It’s Thursday, and we checked out of the Athens Studios and checked into the Hotel Carolina, a little trepidatiously since it sounds so much like the “Hotel California” as sung about by the Eagles. (“Such a lovely place…”).  It is priced about the same as the Athens Studios, but the room is much smaller, and we don’t have access to a laundromat. But it is nice, the desk clerk is very friendly and it is in the heart of the city and near the Parliament building. And there is a Starbucks nearby. So far we have seen two in  the city. I can remember when there was just the one in the Pike Street Market. There is something simultaneously comforting and disconcerting about having a little bit of Seattle wherever you go. 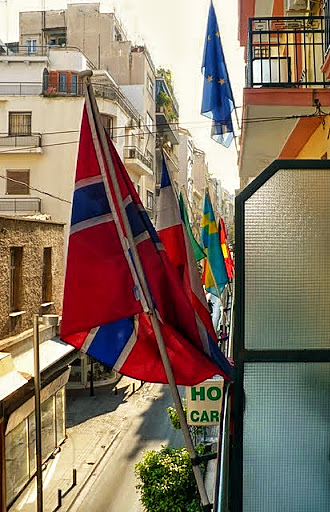 View from the balcony of our room at the Hotel Carolina on Kolokotroni Street.

To get here, we caught a cab instead of taking the metro. It cost 4 euros instead of 2, but there is less walking, and we didn’t have to hassle with our bags up and down the stairs to the subway, and rolling through the busy streets here in the city center. Especially because Teri’s bag has a broken wheel. Alas, she may have to consider replacing Old Paint when we return to Alaska.

This part of the city is grittier than near the Acropolis Museum. Narrow streets lined with “antique” stores, hardware stores, coffee shops, shoe stores, religious icon stores, fabric stores; few wider than 20 feet. The pattern through much of the city is to have the first floor of the 4 to 7 story buildings dedicated to retail, and the remaining upper stories used for residence. It makes for an interesting mix of activities with women shaking our throw rugs on the fourth floor balcony, a couple having coffee on the 3rd floor, and the shops down below. Everywhere there are pigeons and doves. 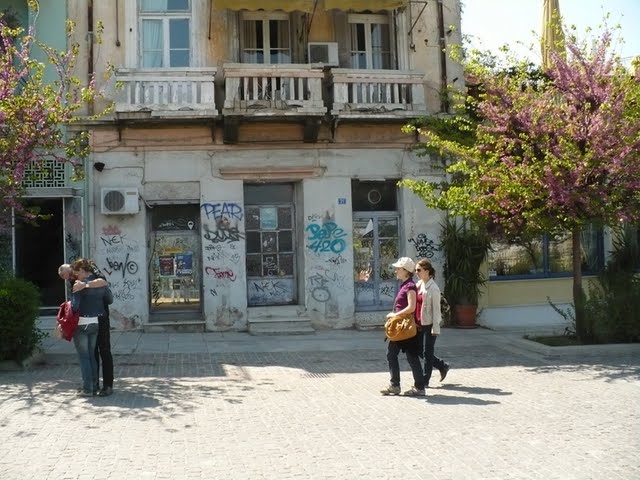 Street scene on the way to Kerameikos. Note the graffiti, and the lavender flowering trees.

After we checked in, we walked to the old Athens cemetery, which dates back to Socrates, Plato and Pericles [Pericles is buried somewhere there, but not the others]. It has a nice little museum with statuary and artifacts from the area. Much of the material for the museum came from the wall of the city of Athens that was erected in great haste with whatever material was at hand to fend off the Spartans.[We aren’t entirely sure about this, but some quick research isn’t settling the question. At some point, someone decided to put at least part of the grave markers on the walls, rather than the ground below.] And so it was preserved all these centuries. Parts of the wall are still there in the cemetery. We walked down the Sacred Way that leads to the Sacred Gate (one of 13 into the city. Not superstitious those old Athenians). I have a photo of Teri standing where the Sacred Gate used to be. The high points were spotting a 10-inch tortoise, tadpoles in the Eridanos “River” (a small stream by our standards) that flows through the cemetery, and a woodpecker. 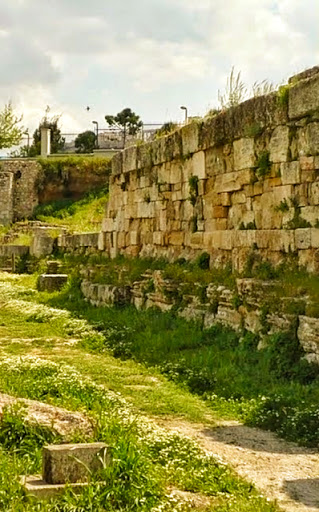 Part of the city wall, with the Sacred Way running alongside it.

We had lunch alongside the railroad, led to our destination by a student who spoke good English and offered to help find our way (we were, in fact, heading in quite the wrong direction).  He was very nice, and hoped to get into the London school of Economics after he graduated from college. We dined in the shade [on delicious Greek salad with the freshest, most flavorful tomatoes and cucumbers you could hope to eat], outside next to the sidewalk. The passing crowd was fascinating, from North Africans selling watches and sunglasses, to the five-piece gypsy band (3 accordions, 1 guitar and 1 tambourine, which was used more for collecting change than playing). I realized that they were playing the same five bars over and over, with some slight embellishments. It made sense. Because they were strolling musicians nobody was going to listen to them for more than a minute or two, so they didn’t really need much of a repertoire.

A new week, a new home. We’ve been in Athens seven days. The Hotel Carolina features a filigreed elevator door on each floor, with the elevator itself having no doors.  The neighborhood is all retail stores of every description – hardware, antiques, shoes, lots of jewelry, bags – and cafes, fast food shops, and lounges (bars) for blocks in every direction. There’s a church every couple of blocks, including the head cathedral for all of Greece, the Mitropolis that sits at one end of a marble-paved square.

We spent parts of the afternoon and evening walking through the streets, looking for the cheap Greek pies (spanikopita – the spinach pie, tiropita – feta cheese pie, and many other varieties – potato, vegetable, and meat) at the Everest chain of pie and salad fast food restaurants, and for chocolate. We found the pies, along Ermou Street which has British and American chain fashion stores, and lots of street vendors. Today’s sellers included some selling guns that blow bubbles, coconut juice stands,and Greek men selling lottery tickets.  They leave the sunglasses and bags and toys to the Indians and Africans. In the past few days we’ve actually seen customers buying sunglasses and bags, and I saw a teenage boy on the ferry to Aegina with a splat tomato – we are relieved to see that they sell things. It was a chillier day, with a west wind blowing off the ocean, and clouding up later in the afternoon. 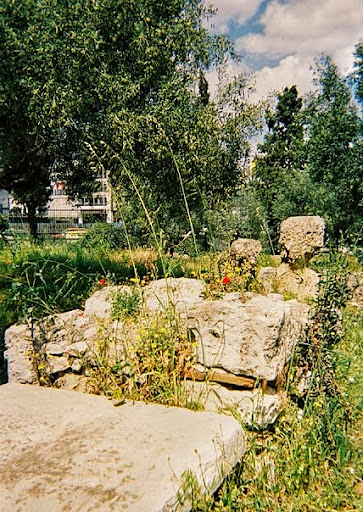 Gravestones at Kerameikos, some that didn’t get used by the Romans to pave over the river.

As Jim mentioned, we walked to Keramikos, the potters’ field  and graveyard since about 2,500 B.C. ( Pausanias writing about 160 C.E. says that Keramikos was named after the hero Keramos, son of Dionysus and Ariadne; our word “ceramic” came from Keramikos). About 600 C.E., people stopped using it as a cemetery, and it lay unremarked until the mid-1800s, when someone found a grave marker while digging. The Eridanos River runs through it – two thousand years ago it was a wide marshy area with enough water to make it good for potters. The river today is maybe two feet wide and a few inches deep, with tadpoles and dragonflies, and one sizable tortoise crossing a bridge ahead of us. Tall orange canna lilies and reeds stand along the banks, and red anemones (one of Demeter’s flowers), beds of chamomile and grasses spread across the cemetery grounds. In later days, the Romans covered the river over through most of Athens to use it as a sewer, often using gravestones. 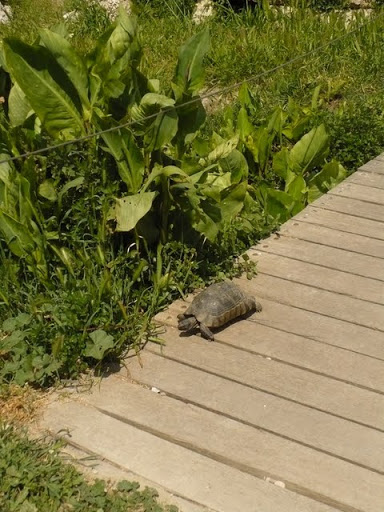 Tortoise on the footbridge over the River Eriadnos. 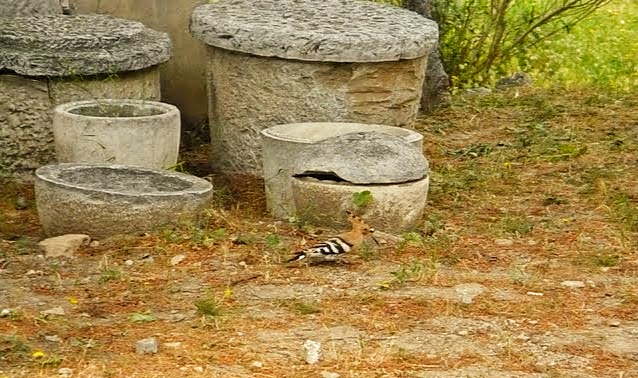 Hoopoe bird at Kerameikos. Back behind the museum the area is littered with gravestones, bowls like these, and other fragments that haven’t been put back into place  and weren’t considered worth a display.

One reason I wanted to go is that the route from Demeter’s temple in Eleusis to the Parthenon ran through the cemetery along the river. Every year, a procession honoring Athena started in Eleusis, and went through Keramikos to the Parthenon atop the Acropolis. This was the biggest event in the Greek religious year, and many of the statues and carvings on the Parthenon show scenes from it. A small stone marker says, “Sacred Gate.” Looking up to the southeast, the Parthenon stands out against the blue sky. Pilgrims walked the route the other direction as well, going through Kerameikos and Piraeus to get to Eleusis to participate in Demeter and Persephone’s religious ceremonies there. 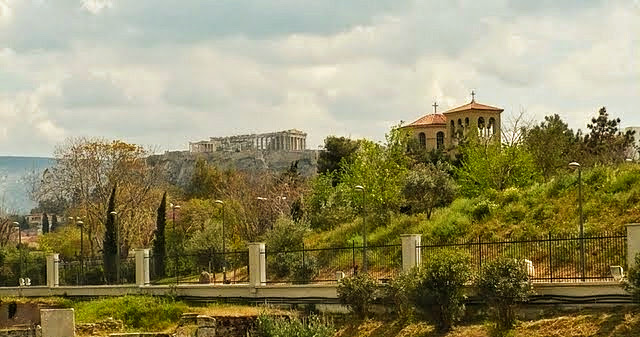 A view of the Parthenon from the Sacred Way in Kerameikos.

Jim found an area called the Dromos, a road that ran through the cemetery between Athens and Plato’s Academy. It was at a spot along here that Pericles gave a famous funeral speech honoring the dead in one of the wars by speaking of how great the Athens form of government was. Pericles, by the way, paid for many of those temples on the Acropolis, including the Parthenon, by taking money from the alliance of Greek city-states that Athens dominated. One Greek scholar termed it the greatest embezzlement of all time, but at least Pericles didn’t spend it foolishly.

A group of German art students shared the space with us; they sat in front of the museum for an hour and drew the statues taken from the graves. We walked through the museum before going to the cemetery itself. The marble statues and grave markers there are free to be touched –so unlike the American museums with which we are familiar. One shows a grandmother holding her infant grandchild, with the inscription, “I hold here the beloved child of my daughter which I held on my knees when we were alive and saw the light of the sun, and now dead, I hold it dead.” 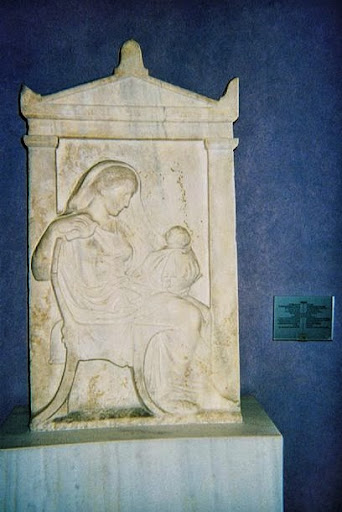 Memorial for a grandmother and her grandchild, in the museum at Kerameikos.

The museum holds hundreds of grave offerings – vases, jewelry, cups, toys – and one wonders – how did you come by these? When your grandmother died, did you go to the potter’s shop and say, “I need two of these, and she would have liked this, and I should probably have three of those?” Covered box with octopi at the museum at Kerameikos. 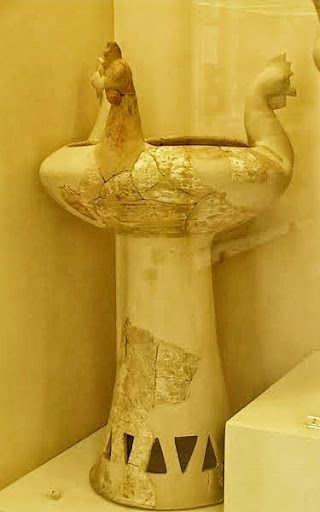 Vase with chicken heads at the Kerameikos museum.

Tomorrow we think that we will head to the modern market, and then to explore our new neighborhoods. Anthea is on Crete with her class and without much access to the Internet. I’ll pass on the links to her blogs when they show up. 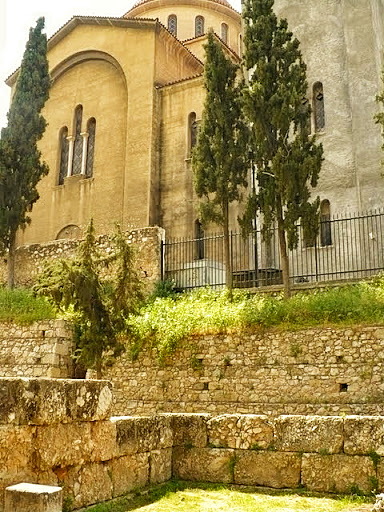 An old (1600s?) stone church behind Kermeikos, with its adjacent modern concrete tower next to it.