Posted on June 23, 2013 by Road Trip Teri
Breakfast at La Baleine on the Spit; Jim’s oatmeal with berries on it. It had sides of dried cherries, walnuts, brown sugar, cream, and honey, along with homemade toast, and butter — a morning feast. 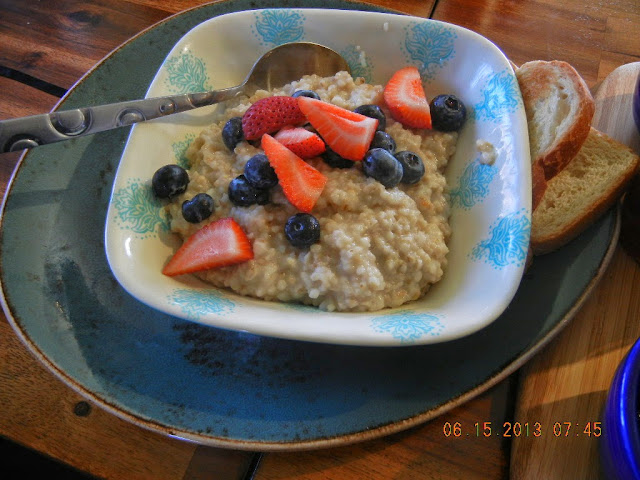 Fog hung over the Spit almost the whole day.

The morning opened with a panel loosely themed around books as travel. Nora Marks Dauenhauer, a Tlingit woman and Alaska’s State Writer Laureate at the present talked about translating from Tlingit into English as a journey.
The later morning was filled with a workshop on images, opening with fifteen minutes of free writing — create a scene of an experience that you didn’t understand, using specific images. Then the teacher (John Daniel, a nature writer, poet, memoirist) handed out sheets with short poems and quotes and talked images for an hour, with a few minutes working again on the free write, and a couple of minutes of Q&A. One quote, from Crowfoot, Chief of the Blackfeet Confederacy as he was dying in 1890: “What is life? It is the flash of a firefly in the night. It is the breath of buffalo in the wintertime. It is the little shadow that runs across the grass and loses itself in the sunset.”
Jim met me for lunch. We stopped at the Homer Farmers’ Market to take photos and chat with people, before going to lunch at Fat Olive’s (Italian and delicious).
Little girl at the Market.

The fog lifted a bit in the afternoon, but a chilly wind persisted — only 50 degrees despite the sun. It didn’t hinder the fisher people, or the multitudes of tourists on the Spit, or the gulls.
Gulls at Land’s End. 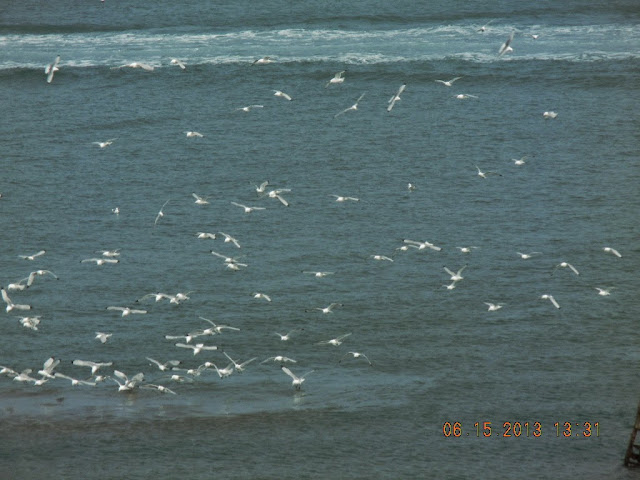 The first afternoon session involved another writing exercise, this one a description of your most embarrassing moment, just describing the experience but without any reflection on it. Then ask what you know now that you didn’t know then, and incorporate that. That’s reflection, as distinguished from exposition, or from writing about experience.
At the break, I went downstairs, noticing the long double row of plates with cookies. Coming back, not more than seven or eight minutes later, this is what I saw:
A single cookie, on the far plate. 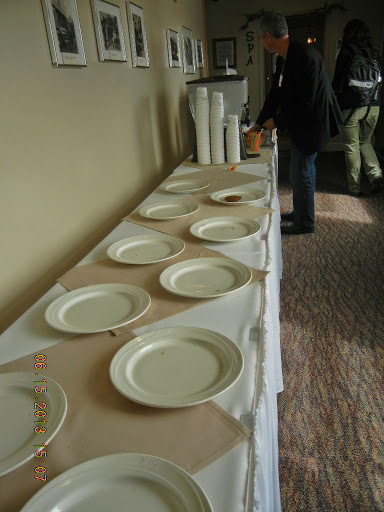 Thirty seconds later, that was gone as well, and a minute later, some of the staff people who had been arranging the rooms for the next session came out and wailed, “Oh no!”
The final session featured Christine Byl who wrote Dirt Work: An Education in the Woods (about working on National Park trails as the only woman in a group of guys; a mix of memoir and natural history and science), and Alexis Rizzuto, a Boston editor at Beacon Press. That combination worked well — both were dynamic and candid, and full of interesting perspectives on the publishing process.
One thing that Jim commented on yesterday and I watched for today was how many people were taking notes. Everyone had pen and paper (only one younger guy was taking notes on his laptop and he was pretty diligent about it). But the only time that they used them for the most part was during the writing exercises. They didn’t take notes –I rely on notes so much that I find it hard to think about writing without them.
We went to Naomi Shihab Nye’s evening readings at the high school (public invited). So many captivating things that she said. “You can’t order a poem like you order a taco. You have to live in a way that poems find you.”  She described a man who gave his wife a pair of skunks for her birthday because they had such beautiful eyes [not noticing anything else about them]. “The poems that have been hiding in the eyes of skunks for centuries crawl out and curl up at your feet.”
And she emphasized kindness, as do many of the people here. It’s a pretty mellow, pleasant environment, not exactly what I expected to find.

This entry was posted in Alaska Travels. Bookmark the permalink.