Posted on October 16, 2012 by Road Trip Teri
The albergue guy tells me that they cut off the email at 10:30 — the rest will have to wait until tomorrow.

We got started at 7:20 a.m. — well ahead of sunrise, but enough light to see the yellow arrows and scallop shells that sign the way west. Blessedly, the morning was clouded over for several hours — enough time for us to do our major climb of the day, about 200 meters (600 feet) up to Villamayor Monjardin. Even with the temperature in the low 70s in the morning, it was muggy and we were sweating within a few minutes.

[August 26, 2012– First day of walking] That means “Height of Forgiveness,” and traditionally a pilgrim reaching this height was pardoned, even if she didn’t make it all the way to Santiago. The wrought iron statue of peregrinos here – a recent addition – reads “donde se cruza el camino del viento con el d las estrellas.”

And it is the path of the wind. Above me and stretching off along the hilltops are wind turbines. Their steady thrum contrasts with the higher, faster chirrup of a grasshopper nearby.

I am sitting in the shadow of a stone shrine much older than anything else up here, waiting for my parents to catch up and feeling the arches of my feet relax from the long climb. My decidedly untraditional pedometer app tells me we have walked more than 7 miles already.

Beside the shrine is a cairn. People have written on the stones they left, benedictions and remembrances. Hats and scarves are pinned under the stones. Ribbons are tied to the peregrino sculpture. I have nothing to leave; the stone in my backpack I am saving for Cruz de Ferro, later in the trip. So I kneel before the cairn and kiss my fingers to the stones, then I sit and I write, taking away intangible things since I have nothing tangible to leave.

Here being Barcelona! With all the time zone changes, we got here . . . Approx. 36 hours after leaving the house. So since the Camino pilgrimage – and indeed, all pilgrimages – traditionally begins with the first step out your door, I have been on pilgrimage since yesterday.

It is, as Bilbo said, a dangerous business, stepping out your front door, but thus far the worst we’ve had to deal with was non-functioning wifi in Heathrow and the hostel mixing up our reservation such that we have a room with a shared bath rather than a private.

This is my first time in un pais hispanohablante – a Spanish-speaking country – and it is an absolute thrill to be someplace where I can communicate with relative ease. I mean, I’m worried that when I greet people in Spanish they’ll think I’m fluent, but . . . Like, the guy checking us into the hostel was trying to explain that he’d had Mom sign the wrong credit card slip and I was able to act as an interpreter (although much to my amusement, that interaction drew as much on my recent experience running lots of credit card charges as on my ability to say “You charged this already – ya, ya-” “¡Si!”).

Tomorrow, whether I like it or not, we are doing touristy stuff. I do want to see La Sagrada and La Rambla, which I guess is a market-y street, but mostly I find I am itching for the pilgrimage. Traveling and tourism (especially with parents in tow) are complicated. Walking is simple. Point me west towards Santiago and let me walk.

And here are photos from today, Estella to Los Arcos. I haven’t figured out the camera, even yet. I take pictures, I think, and then they never show up.

Uno gatito en Azqueta (a little cat in Azqueta), with Mont Jardin in the background. By Anthea.

Asparagus fields near Los Arcos, with the dirt mounded up around them to keep the stalks white. 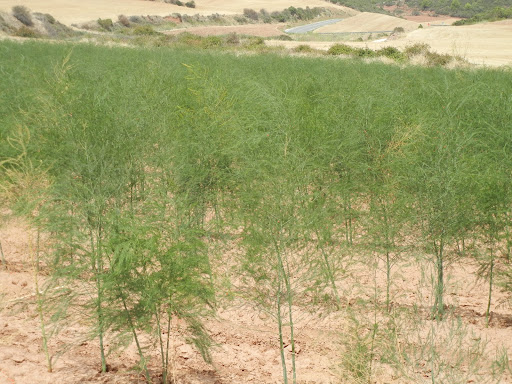 The pilgrim’s delight — a tiny speck of shade on the road. The red dirt is typical of Rioja, the region that we’re in; the golden field at the back is wheat stubble; the hills are covered with scrubby trees, some of them Holm Oak, some pine. The path, very typical of what we are walking on, is dirt, pebbles and dust. When wet, it’s a bright reddish tone, and apparently turns into very sticky deep mud. The wheat fields have been cultivated since Roman days — I need to find out how they’re done that while keeping the soil fertile. 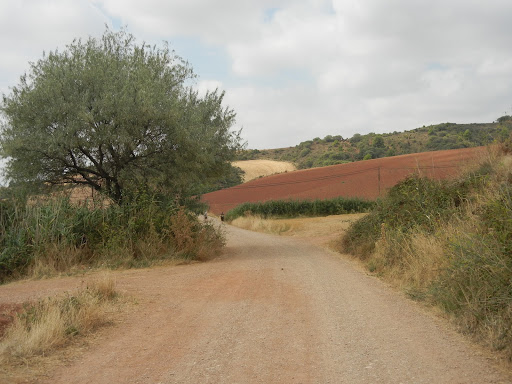 Pilgrims dining outside in the plaza at Los Arcos, in front of the church (to the left). 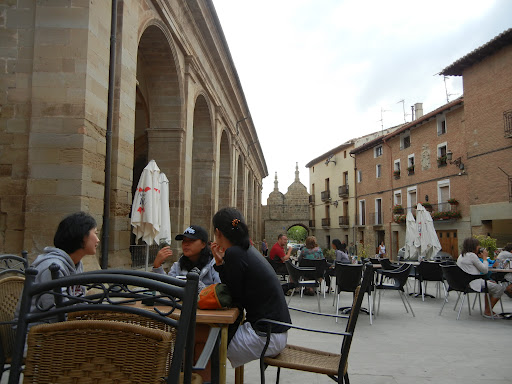 A photo from yesterday, around 9:00 a.m., on the way to Estella. Jim, Anthea and me casting our shadows. 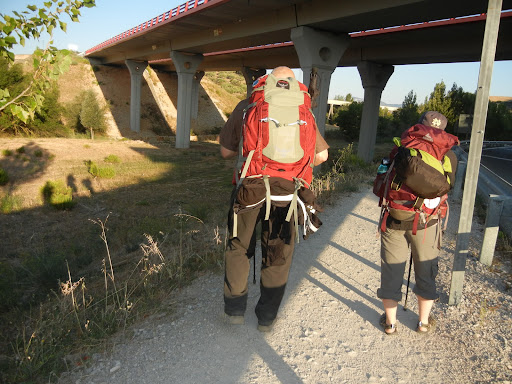 A fig tree, with figs. We’ve seen apple trees (not many), olives, date palms (in Barcelona), and more — it’s very Biblical in some ways. 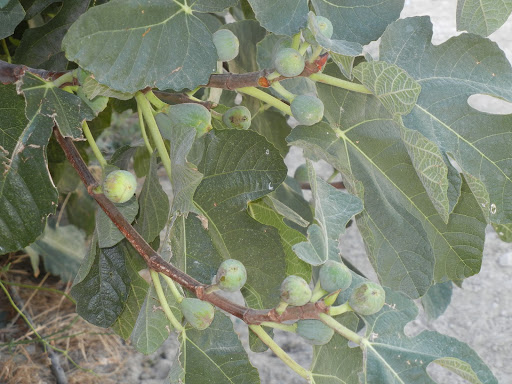 The tiny raspberries that grow wild along much of the path. When they turn black, they are delicious little bites for morning breakfast, or afternoon dessert. 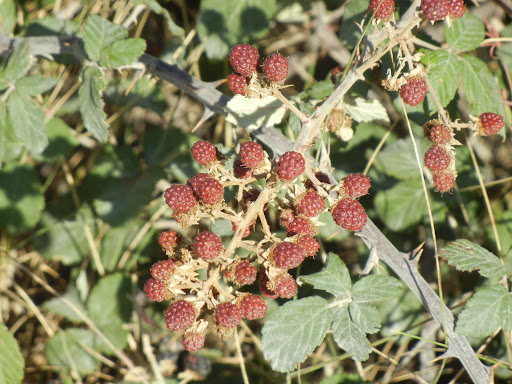 Woman feeding the ducks in Estella, at the Rio Ega (August 28). 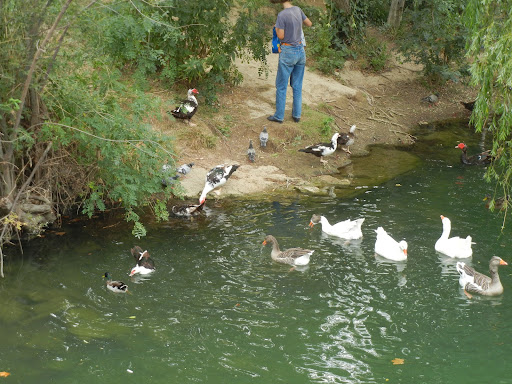