Posted on October 16, 2012 by Road Trip Teri
We got an early start this morning, and stopped in Ventosa for croissants and coffee around 10:00. At the little bar, we saw an Aussie couple who had passed us earlier (everyone passes us); they started at 5:00 a.m. from Logrono, so they had covered considerably more road than we had. We are discovering our pace, and it’s not speedy.
The weather served us well for walking — chilly enough for me to wear a sweater and a windbreaker, and with a pilgrim’s wind, blowing against us from the west. There was blue sky, but with enough clouds that we didn’t see much of the sun until nearly noon.
We found our hostal in Najera, and checked in at the bar nearby that the family also owned. They seemed harried — busy with the 2:00 lunch crowd. As the day went on, we had to go back several times for various reasons, and it became clear that they cater to people on tours of various sorts. A large group of cyclists checked in this evening (temporarily overwhelming the internet); earlier, a woman was trying to check in as part of a road tour of the Camino (looking for the garage to park her car). She was dressed elegantly, and looked clean and fresh, well -coiffed — not someone who’d been walking all day (although the Aussie woman from earlier in the day did manage to look just as at ease, despite having walked all those hours — enviable).
We had walked about 12 miles since 7:30 a.m. with only one break, so we found a bar to serve us bocadillos. The further west we go, the meatier the menus become. The potatoes and asparagus have now disappeared from the tapas menus (with the occasional exception of patatas bravas, which are served with garlic mayonnaise), and the first course choices in the menus del dia are almost all entirely meat. Beautiful truck gardens show up regularly along the road with sweet corn, lots of peppers, huge tomatoes, green beans, fava beans, zucchini and more — but none of this ever makes its way to the restaurants.
Time to finish for the evening. Tomorrow we walk up and up, to Ciruena, with a golf course. Not likely that we’ll be trading our walking sticks for golf clubs, but it will make another interesting adjunct to the Camino.
Baby olive trees, protected with plastic sleeves. We saw lots of young grape vines growing like this too, often with pop bottles or water bottles used for protection.

For the family farmers — a different style of hay stacking (or straw?) in a field.

Jim says this has a 50cc engine — not much, but better than walking to your vineyard to care for the grapes.

A beehive hut outside Najera, with industry in the background — old and new. 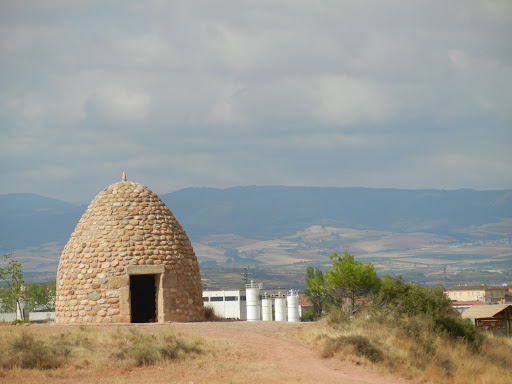 Girl with two burros and a dog, walking east instead of west on the Camino, near Najera. She was in contrast to an executive looking sort who was striding west, very tan and fit and well-off, with a small day-pack and frowning intently as he talked into his cell phone.

Old street in Najera, now primarily stores and bars. One of the shops sold ice cream; it had a row of liquor bottles, beer and wine along the back and an espresso machine; it sells drinking chocolate in the winter. Not what we usually think of as typical of an ice cream place.

Owner of a hippie shop in the main street in Najera (population 7,000).

A dinner menu in Najera. It says that lunch (comida) is served from 1:00 to 4:00; dinner from 8:00 p.m. to 10:00 p.m.  My favorite dish is the “illustrated salad,” no idea what that might be. Even on the posters that are designed  for tourists the English translations often are done by someone whose first language is not English. It leads to some charming expressions.

Sunset, seen from our hotel room in Najera.

From August 31, Jim and Anthea on a teeter-totter on the outskirts of Logrono.