Dante’s “Inferno” — the ballet, composed and produced by Glenna Burmer

Dante Aligheri’s Divine Comedy, and especially The Inferno, has been known since its publication in Italy in about 1317 for beauty and intense humanity. In February 2014, Glenna Burmer’s music, evocative of the strength and imagination in The Inferno was brought to life by Ballet Bellevue (Bellevue, Washington) with the choreography of Ronn Tice and Jennifer Porter. This is an account of the ballet, in rehearsal and in production, with the permission of Dr. Burmer. 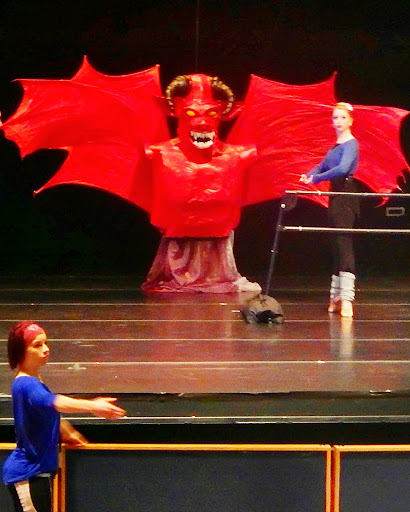 Satan, in rehearsal. [TW Carns photo.]
Backstory
Dr. Glenna Burmer graduated from University of Washington Medical School in 1981 and started a biotech company in Seattle in the 1990s. She turned to composing music in the mid-2000s, and has produced several concerts in Seattle. Dante’s Inferno is her first ballet. Jim Carns and Glenna were lab partners in medical school, and he worked with Glenna in her biotech company for several years as a pathologist. Anthea Carns worked with Glenna as the webmaster, production assistant, and finally assistant stage manager for The Inferno. Jim had the opportunity to be a (non-dancing) demon in the production, and thus we had the great good fortune to be part of this production.
Three dances
Glenna staged Dante’s Inferno as one of three pieces, each representing an aspect of the themes of the Underworld and the other worlds, and the sacred and the profane.Demeter and Persephone with music by Tim Huling and choreography by Ronn Tice explored the Greek myth of the origins of the seasons. When Hades, lord of the Underworld, kidnaps Demeter (goddess of the harvest)’s daughter Persephone from a spring time meadow, Demeter mourns and the earth grows cold and barren until the gods cooperate to return Persephone to the earth. Although Persephone must return to Hades for a few months each year (winter), when she is on earth with Demeter, everything flourishes.

Flower girl (Maya Huling), Persephone (Megan Horton), and Demeter (Alyssa Gold). [Fred Burmer photo]
Sacred and Profane, with music by both Glenna and Tim, and choreography by Jennifer Porter, explored the dual aspects of a dancer’s being, showing them distrusting each other, but in the end, joining in harmony.

Anthea Carns, Gordon Compton (stage manager), Glenna Burmer (composer, producer for Dante’s Inferno, Jim Carns (in his demon blacks) on February 17, at Ballet Bellevue rehearsal space. On the table in the bottom left corner are some of the masks; the orange and yellow fabrics to the upper right are the skirts for the Fire Dancers.  [TWCarns photo]
Glenna began writing music in the mid-2000’s (http://www.glennaburmer.com/Glenna_s_Music_A9GT.html), and most recently composed the music for the Dante’sInferno ballet. The production was a benefit for Ballet Bellevue (http://www.balletbellevue.org/), which provided many of the dancers, as well as the rehearsal space, and some of the administrative assistance. Ronn Tice (http://www.linkedin.com/pub/ronald-tice/4b/62b/a1b) and Jennifer Porter (http://www.balletbellevue.org/jenniferporter.php) were choreographers, and Fred Burmer (Glenna’s dad, a professional photographer,   http://www.glennaburmer.com/Burmer_Art.html) did most of the show photography. There will be a video, available on the website.
All of the production photos are from the website and FaceBook pages, and are (except as noted) by Fred Burmer. All of the rehearsal shots are by Teri White Carns, with permission of Glenna.
Ballet 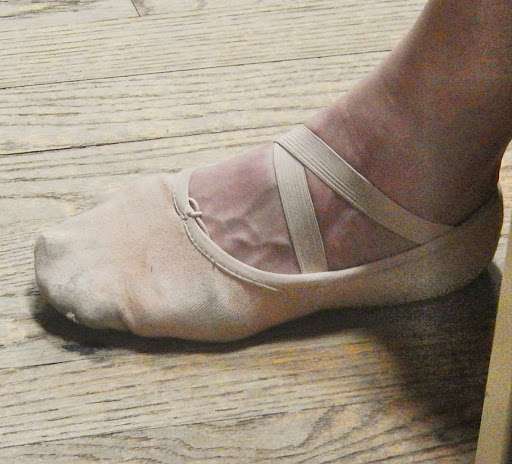 A dancer’s foot at rest [TWCarns photo].
Ballet (from Italian, ballare, to dance)  —  The Pittsburgh Ballet Theatre website puts its origins in the 1600s in the French royal courts [http://pbt.org/community-engagement/brief-history-ballet]. The classical ballet style used in Dante’s Inferno by the choreographers relies on a “vocabulary” of movements that was developed in the 1800s. Anyone who took ballet classes knows of the five positions for the feet, and five for the arms. There are bends, jumps, spins, and rising to the ball of the foot or the toes. From these positions and a few more, all of the classical ballet stories are constructed. In the French courts in the 1600s and early 1700s, ballet was combined with opera, but since then ballet dancers are silent. The dance movements and the music convey the narrative.
The story of Dante’s Inferno 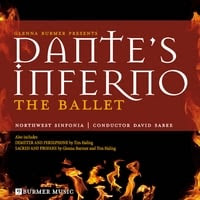 The cover for the CD [from http://www.cdbaby.com/cd/nwsinfonia]
Here is the web site’s account of the history of the Inferno [http://dantesinfernoballet.com/Inferno_StoryandMusic.html]: “The ballet Dante’s Inferno is based on the first part of Dante Alighieri’s magnificent poem, the Divine Comedy, which chronicles Dante’s journey through Hell (Inferno), Purgatory (Purgatorio) and Paradise (Paradiso). Dante was born in Florence, Italy, in 1265, during the early Renaissance period of two warring political factions, the Guelfs and the Ghibellines, who were loyal to either the Pope or the Holy Roman Emperor. Dante was passionate about politics, and also about Beatrice, the first love of his life, who played an important role in his poetry. Although Beatrice married another man and died when Dante was 25, for the poet, she was the idealized representation of all of the heavenly virtues, and his guardian angel.
Dante’s Inferno is an allegorical morality tale. Dante began writing the poem in middle-age, after he had witnessed years of the brutality of war, politics, and painful exile from his beloved city of Florence. The poem graphically depicts his view of sin and divine punishment, as well as his strong religious belief in the power of salvation. Although Dante’s views of the levels of Hell, as described in the Divine Comedy, largely reflect those that were held by the Holy Roman Emperor and the Pope during the 13th century, the poem is also highly personal, and Dante includes the names of many famous and powerful Italian contemporaries as well as his enemies among the sinners that are given horrifying and specific punishments. Although contemporary views of sin and evil do not completely overlap with the views of the 13th century, Dante’s passionate and fundamental cry for human salvation and justice, written in beautiful prose, is a compelling message that transcends time and culture.” [Anthea Carns]
Here’s a link to the website, where you can buy the music, and learn more:

. And here’s a link to a review of the performances: 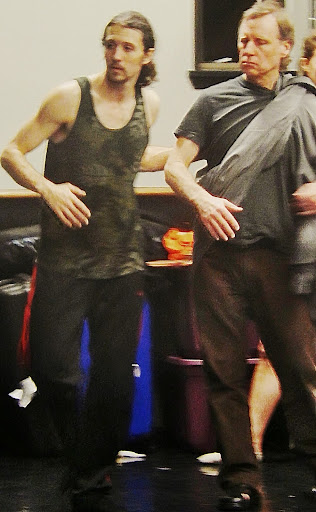 Dante (Shane Tice) and Virgil (Philip Laue), in rehearsal. [TWCarns photo]
The story opens with Dante waking in a forest. The Roman poet Virgil comes to guide him through the Inferno, which he must traverse before he can go through Purgatory into Paradise. Hell, for Dante, was divided into nine circles, with the first being the least evil — lusts and carnal passions. Lower down are greed, jealousy, fraud, despair, and violence. In the Ninth Circle where Satan resides are the traitors. In the poem and the ballet, Dante traverses all of them, fending off temptations along the way and eventually climbing on Satan’s back to get out of hell and back to the verge of Purgatory where he dances with the three Graces (the counterpoint to the earlier dances with the Furies). From there, Virgil will guide him part of the way to Paradise.
Masks and creatures, costumes and props
Glenna conceived of masked dancers for most of the characters in The Inferno, and made some of the masks herself. She also commissioned creation of several non-human inhabitants of The Inferno, including 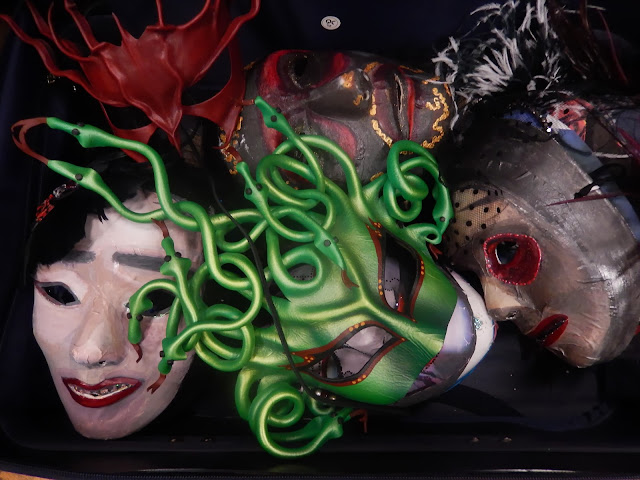 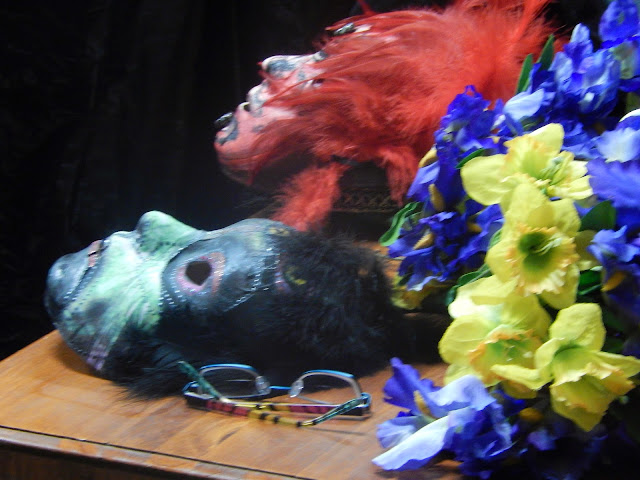 Inferno masks, juxtaposed with flowers for the companion ballet, Demeter and Persephone, and someone’s glasses (part of a modern-day means of seeing the world differently). [TWCarns photo] 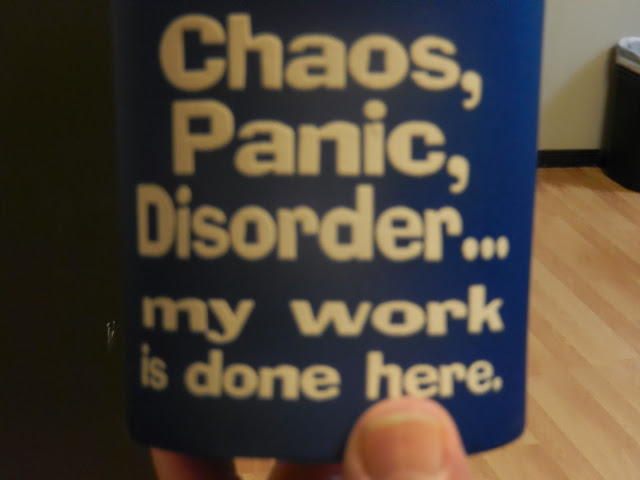 A mug in the office area with an appropriate slogan for The Inferno. [TWCarns photo.] 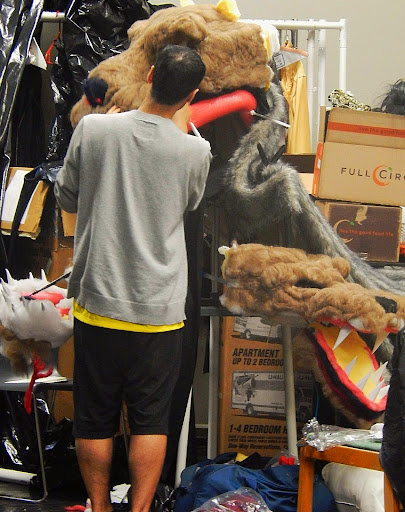 Cerberus in the making (February 16). Shoresh Araundi, the creator of Cerberus, built a structure from foam, tubing, black plastic, and other materials. The brown “fur” is wool, felted over the framework and stitched to give depth and character. [TW Carns photo.] 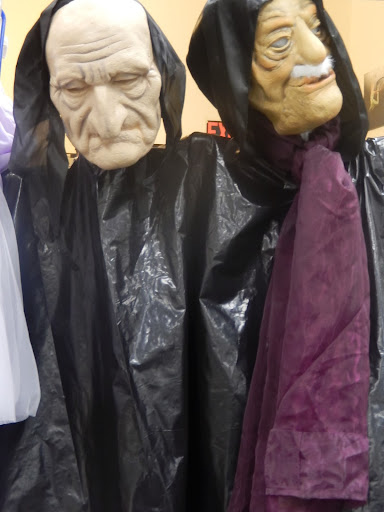 Two of the three virtuous philosophers in Limbo with whom Dante talks, waiting for their cue to enter. [TW Carns photo.]

Jim in his demon mask (chosen in part because it was the only one that would fit over his glasses). [TW Carns photo.] 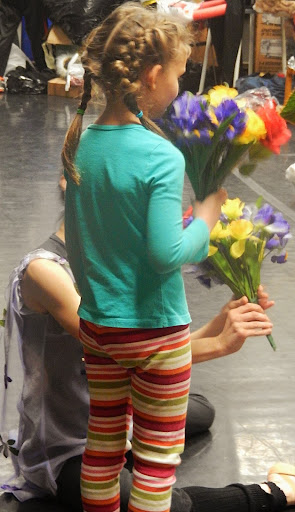 Jim’s partner in the Inferno was 5-year-old Maya Huling, daughter of Tim Huling, the composer for Demeter and Persephone, one of the companion ballets. I never managed to get a picture of Maya in her Inferno costume and mask, so she is shown here with Persephone waiting to rehearse that dance. [TWCarns photo] 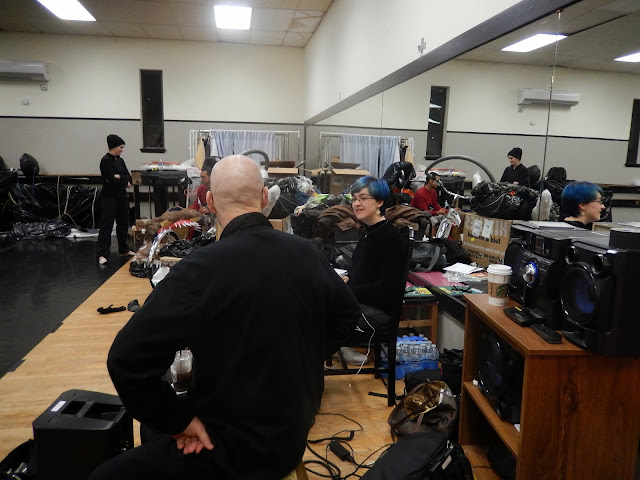 February 15, Ballet Bellevue rehearsal space, the tech line up. The rehearsal floor is open and free of clutter, but the sidelines were packed with people with computers (e.g., Anthea, to the right in the mid-distance), creatures under construction, and an organized tangle of cords and gear.
[TWCarns photo] 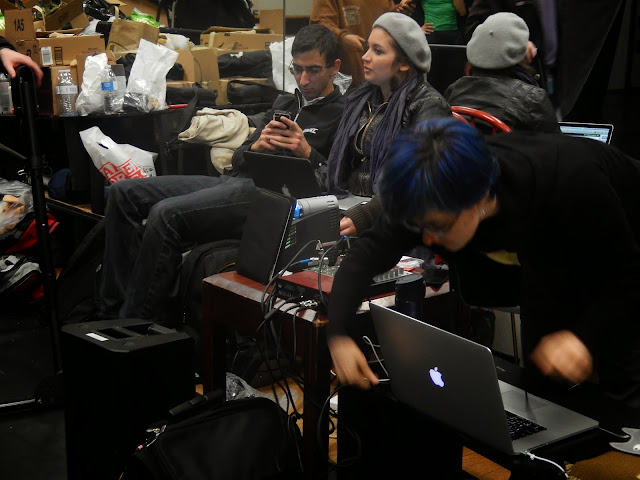 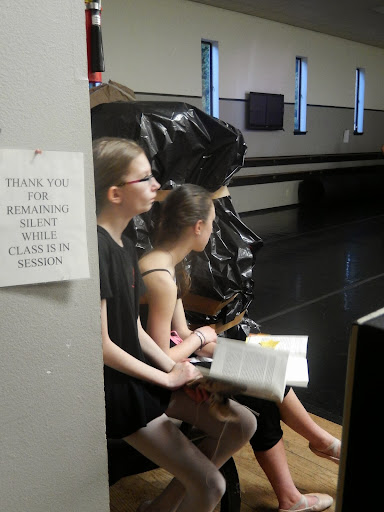 Whole lot of waiting going on during rehearsals. The younger dancers did homework.   [TWCarns photo] 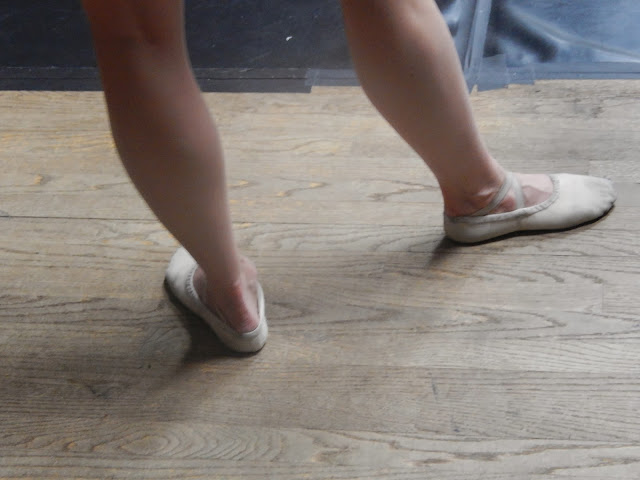 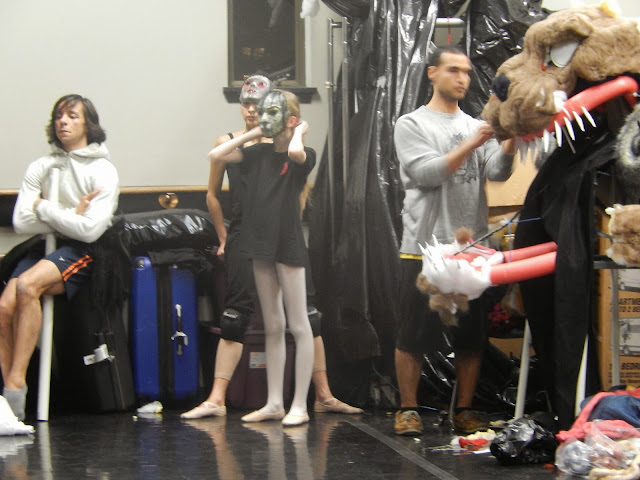 Shoresh Araundi works on Cerberus (he is attaching felt, for the fur, to the understructure) while dancers wait for their cues.  [TWCarns photo] 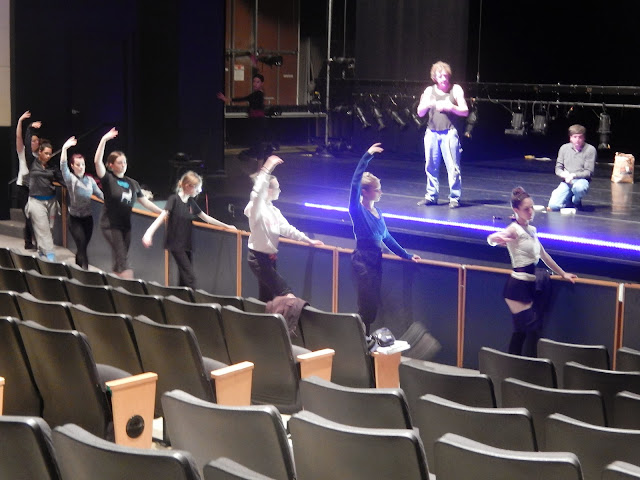 Ronn  Tice (main choreographer for Inferno, on stage to the left), leads warmups in the theater  while Gordon looks on. (February 20)   [TWCarns photo]
The transformation, from rehearsal to stage
One of the things that struck me most about the experience was the transformation that the dancers and the story underwent between the rehearsal hall and the stage. The dancers were beautiful, in motion or at rest, in the rehearsal hall. On stage, with the  music, the costumes, the lights and sets, they  gained a dimension of magic. 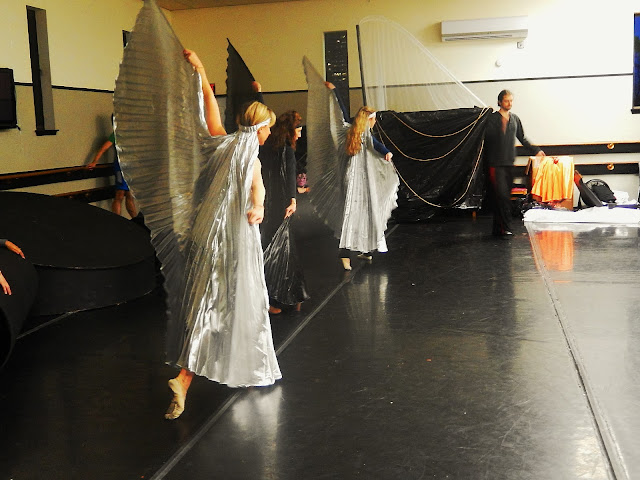 The Furies in the rehearsal hall; Shane Tice (Dante) at the back of the room.  [TWCarns photo] 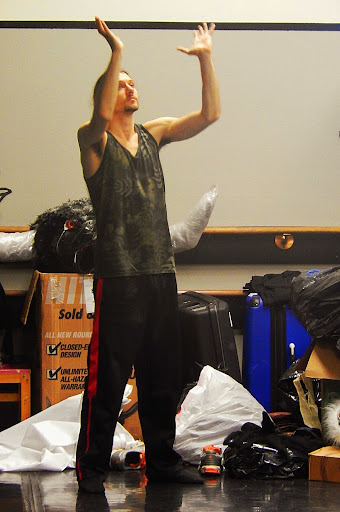 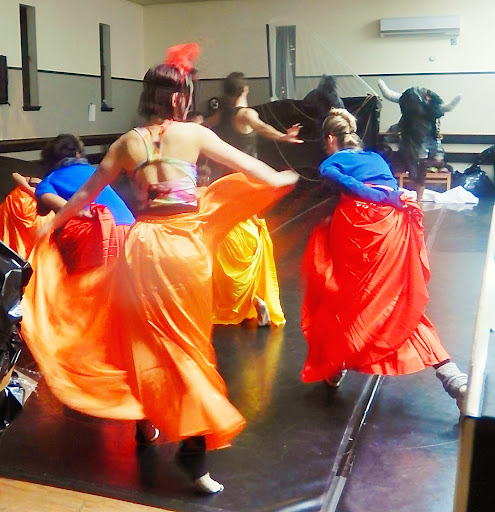 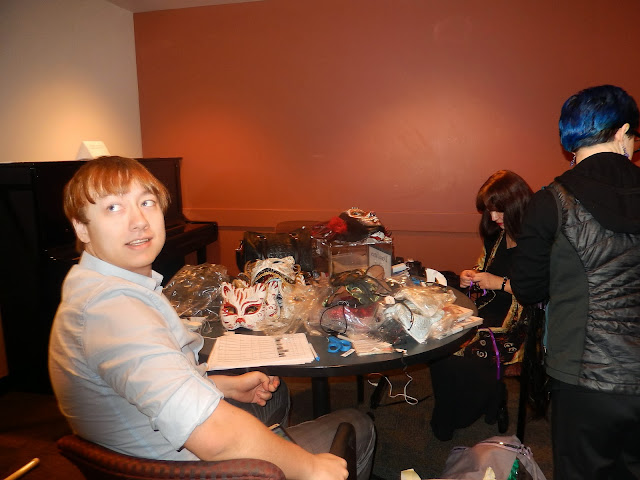 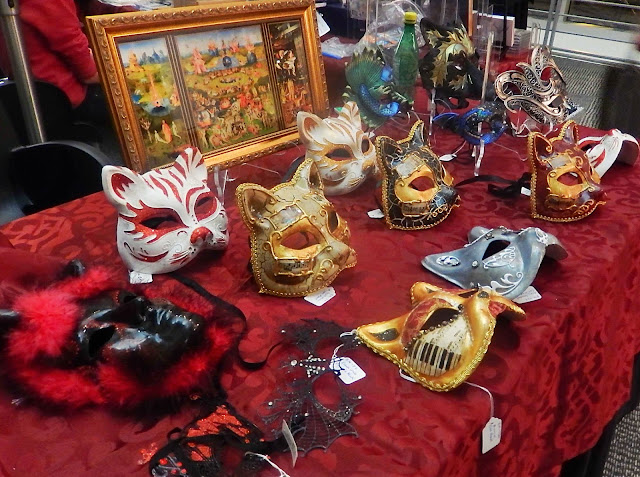 Masks for sale to benefit Ballet Bellevue. The leather masks, some of which were for sale here, were created by well-known  mask-makers across the country, including River Gypsy Arts, Merimask, Misfit Leather, MaskEra, Morgan, Kmickel, Mr.Hydes Leather, Squirrel Creek Creations, Oddfae, and Vincent Cantillon. [TWCarns photo] 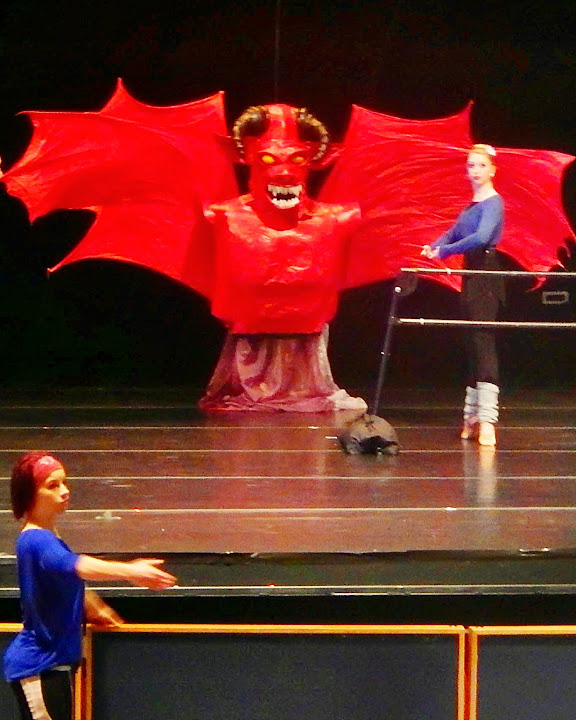 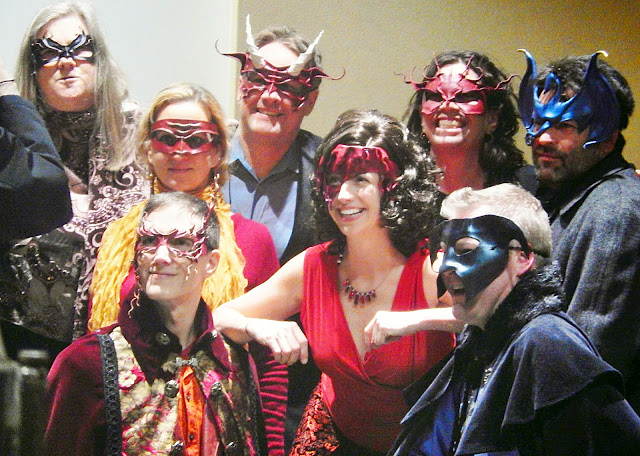 Kyra Stewart, (in red, center front) celebrated her birthday at the Saturday evening show, bringing a dozen or so friends, and outfitting them with masks (by the Tacoma artist Morgan) from her company “A Masquerade” costume and mask store in Bellevue).   [TWCarns photo]
Scenes from the show

Dante (Shane Tice) returns from the Inferno to earth on the dawn of Easter Sunday, dances with the three Graces (Ashley Zimmerman, Megan Horton, Alyssa Gold).  [Fred Burmer photo]
Postlude
Glenna is writing the music for the other two parts of Dante’s Divine Comedy,Purgatorio, and Paradiso. She hopes to take the trilogy to Italy in the future. In the meantime, she’s also working on music for a performance to be put on in conjunction with the UW Astrobiology department, on a series of commissioned short symphonic pieces based on paintings, and more. You can keep track of her on her website, http://www.glennaburmer.com/Home.html.
Anthea is focusing on writing [her blog is at http://runonthewater.wordpress.com/] and driving the foodtruck, 314pie [http://www.314pieseattle.com/].
Jim is back in Anchorage contemplating his next adventure, which is unlikely to involve ballet. Demons are a different question.