Sarria to Portomarin — with the Lazios

Posted on October 16, 2012 by Road Trip Teri
The Lazios are awesome. They’ve been training, and although they and Jim kindly walked more or less at my pace, it was clear that they could have easily walked with Regina and Anthea who were in Portomarin long before we arrived about 5:30 p.m. It was  just about 16 miles total for the day, by my pedometer, give or take half a mile depending on who else’s pedometer you looked at. The first two-thirds we walked mostly uphill (about 1,000 feet altogether), and the last one-third downhill. The weather grew warm by 10:00, but at noon we got our pilgrims’ breeze from the west. Today it gusted and tossed up light brown dust from the paths and sighed in the pine forests as we walked through them. Closer to the farms we heard the roosters, an occasional moooo from a cow, and the coos of doves.
We had woods some of the way (oak, chestnut and pine), fields of corn — some harvested, some not, hay fields, and cows. The smell of the cows dominated, although at times we had pine forest scent, whiffs of the mint that grows in quantity by the paths, and sometimes hay. The stretch of the Camino that runs from Astorga to Ponferrada seemed like the wildest stretch; now we’re back to more farmland. Another difference between Galicia and the earlier areas is the tiny villages — a handful of houses and barns set close together along the Camino. Most of them have nothing other than their stone buildings, but a few have cafes and the occasional albergue to serve pilgrims.
Many people start their Camino in Sarria, and the trails were busier than we’ve seen them. Lines for the bathrooms in the village bars were something we haven’t experienced before. Souvenirs have become common in the cafes, and the plaza in Portomarin, our evening stop, offers peregrino-themed goods of every description. Interestingly, there seem to be fewer bicyclists than in previous weeks. Anthea and Regina met people from Virginia (??) who had come as members of a 14-person running group. Jim and I and the Lazios walked some of the day with a Vietnam vet and his wife from Florida (Mike and Ann). In some ways, the Camino is very democratic — it attracts people from every background imaginable. I thought that there also were more people of a retiree age today, compared to the past three weeks when plenty of older people were walking, but didn’t dominate the stopping places nearly as much as today. Another indication of increased numbers was the young woman at a cafe halfway along who was bemoaning the fact that she couldn’t find any place to stay in Portomarin for the night. We were glad that we took the time yesterday. tedious as it was, to make our reservations for the next week.
Portomarin itself sits on the rio Mino, and the guidebook notes that its strategic position made it important to the Romans and everyone since. In 1962, Franco dammed the river to create a reservoir. Before the area was flooded, several buildings were moved to higher ground, including the medieval church that now dominates the present town square.
We got to Portomarin relatively late in the day; took a little rest and unpacked; then met Regina and Anthea at the pizza place they had scouted out for dinner. Increasingly, the menu del dias at the restaurants look the same: for the first course, a meat soup, a mixed vegetable salad (including the Spanish vegetable of tuna fish), steamed asparagus with a thick coating of mayonnaise, and a couple of other choices that feature ham. The second course is always a choice among five or six meat or fish dishes, although you can occasionally get pasta with tomato sauce. The desserts are flan, custard, ice cream (almost always packaged novelties or ice cream bars, and maybe a cake. Pizza is a good reliable alternative, and there’s only another week to go. At tonight’s place, however, we were able to get Santiago cake for dessert — a thin rich almond cake with lots of eggs, topped with powdered sugar. Regina and Anthea ordered the local liqueur — called “orujo.” They got two shot glasses, one with coffee flavor and one with herb flavor, both made by the waitress’s husband — so truly local. It was very strong and sweet, with the herb flavor being the more interesting.
Sunrise over Sarria. 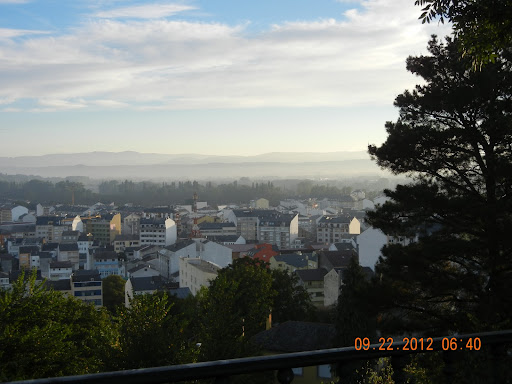 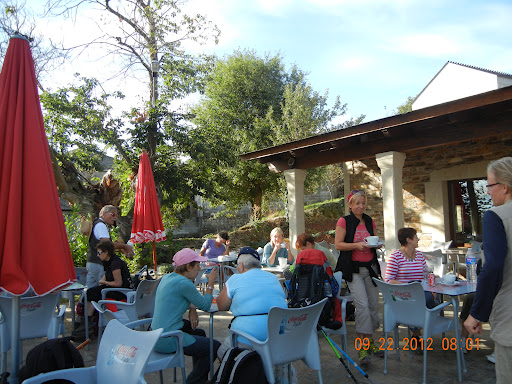 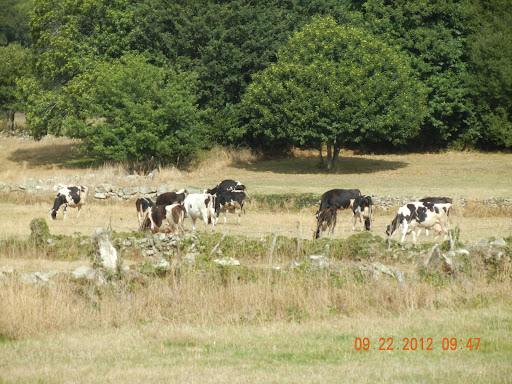 Half a dozen trailers carrying hunting dogs, in one of the villages. Later in the afternoon, we heard a number of gunshots echoing through the hills. We surmise that this was a local hunting group of some sort — possibly after foxes?? [A friend who has walked this section of the Camino before thought that they were probably hunting doves.] 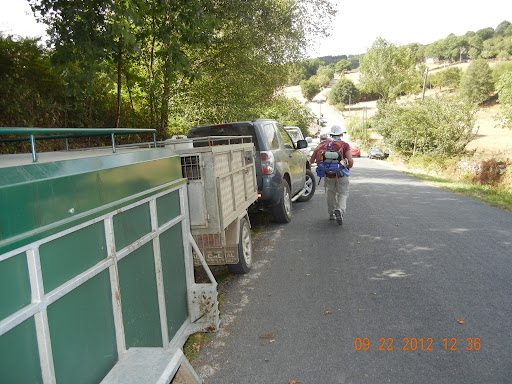 The first horseback riders that we’ve seen on the Camino. You can walk, ride a bicycle, take a wheelchair, or ride a horse or donkey and qualify for your certificate at the end showing that you’ve completed the Camino. 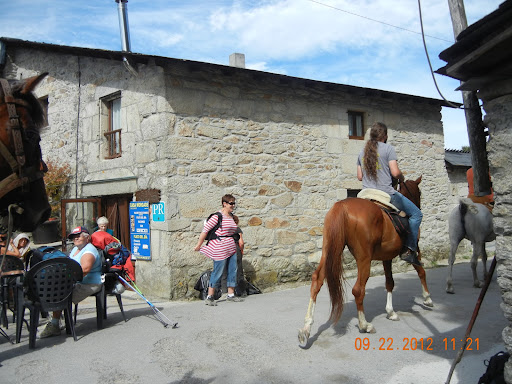 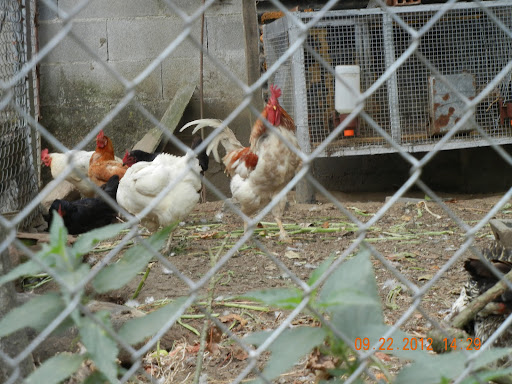 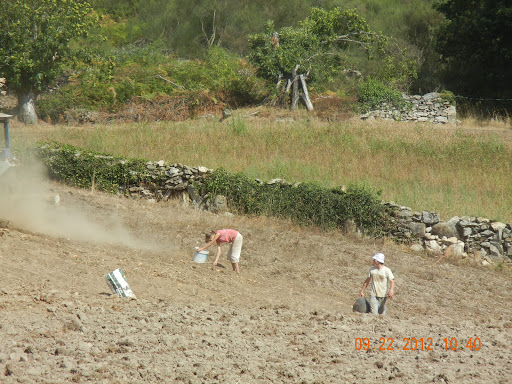 Regina at the 100 kilometer marker. Its importance is mainly symbolic. Like the Alaska Highway, the roads and paths have been realigned since the markers were set in place, so we passed the real 100 kilometer mark somewhere else today. But that’s all the further we are from Santiago — about 58 miles tonight. (Anthea’s photo?)

Jim next to an old stone building that he admired — mossy slate roof, wood slats covering an entrance, and a single large piece of slate incorporated into the design. 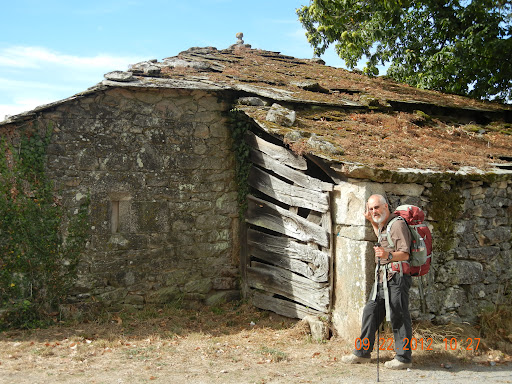 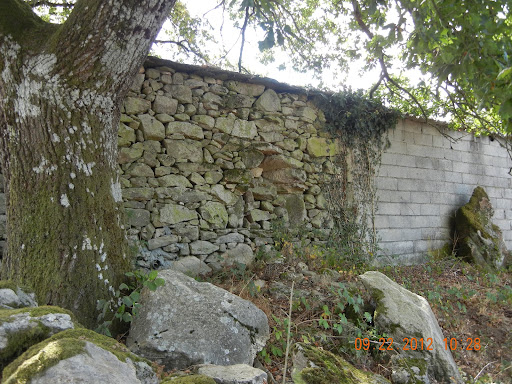 Another way to transport your backpack along the Camino. 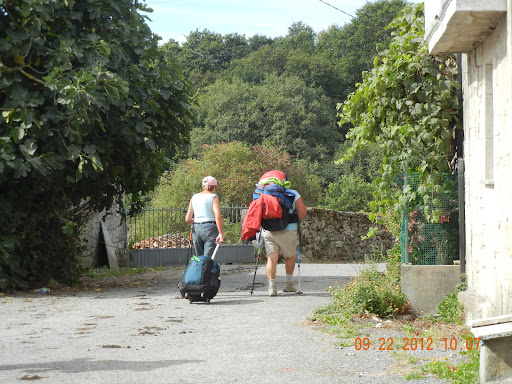 A crib for drying corn; on stilts so that rodents  and other creatures can’t get at it. 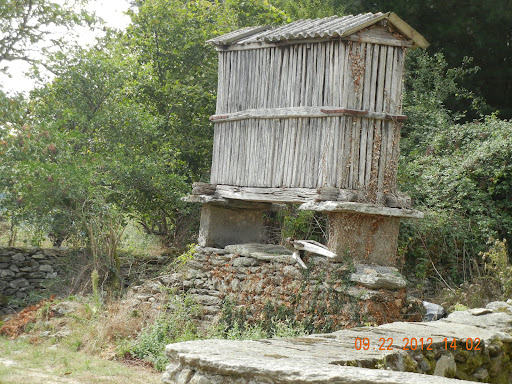 An afternoon break in the shade — Jim, Peg, Tom and Regina. Anthea was far ahead of us, and Regina was only there because she took a long break in Ferrerios to wait for us. 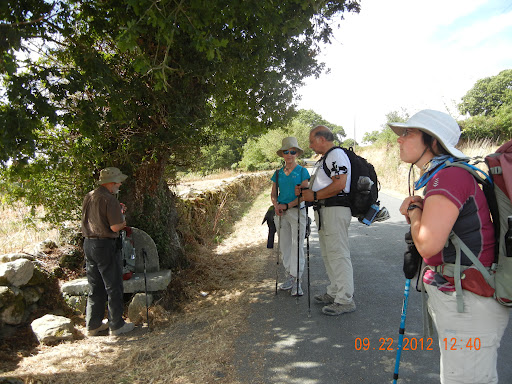 OK, I don’t have any idea what the point of this assemblage of items is. It appeared to be things discarded by pilgrims because they weren’t useful to them any more, or weighed too much, or for some other reason, the previous owner didn’t want to carry the thing any longer. 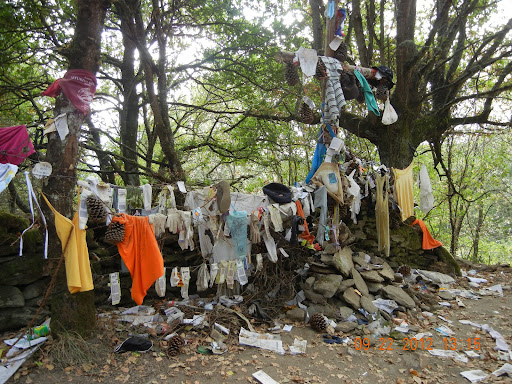 The medieval steps that lead up  to the main square of Portomarin. 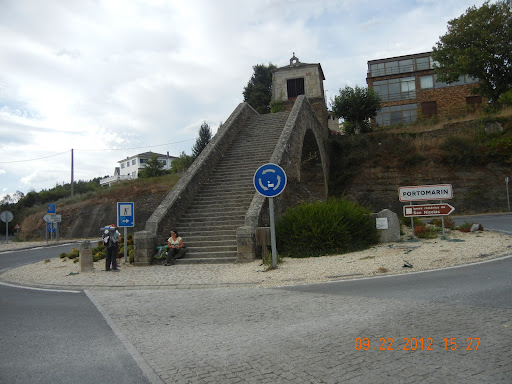 The cathedral  in the square, at night. This was moved from its original location down by the river before the dam flooded the area. It was reconstructed, stone by stone, in the upper town plaza in the 1960s. 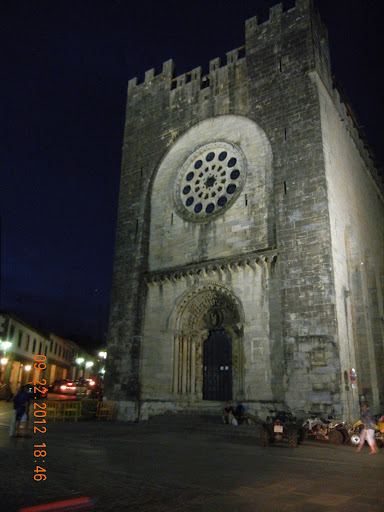 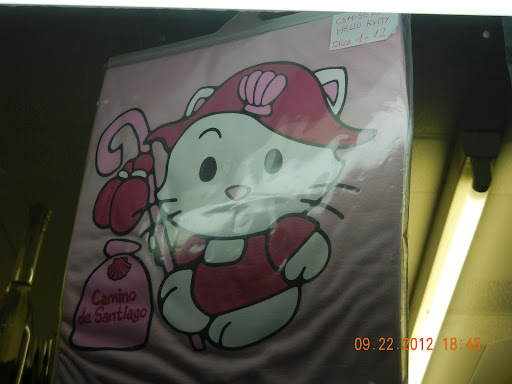 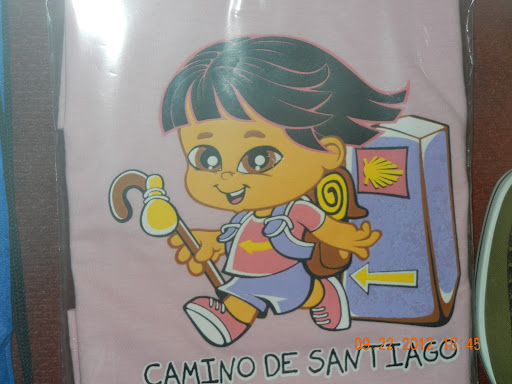