Posted on October 16, 2012 by Road Trip Teri
Today was a day of flies and yellow jackets, of sun and a breeze, of a long walk without much in the way of breaks. This morning at 7:00 a.m. we spotted Orion in the little space of sky visible in the courtyard of the hotel. As we go west, and the days grow shorter, dawn arrives closer to 7:30 than to 7:00. Later in the morning, the waning half moon rode white in the morning sky ahead of us.
Our path led first along a country road, and then back onto the gravel. The gravel paths are usually wide enough for one vehicle, and we sometimes share them with farm equipment or people with a lot of local knowledge. Walking on them is often like the country roads around Buchanan — Briar Road for example —  with equal amounts of dust and loose stones, but not as many potholes or trees for shade.
As the morning grew warmer, swarms of little black flies showed up, along with fragrant fields, mint plants by the roadside, bird song, and a soft breeze. For the first few miles, trees planted along the road kept us cool. Later in the day, the yellow jacket wasps came out and joined the black flies. It was the first day with so many bugs. They all must have something to do with themselves when there aren’t peregrinos around, and we sincerely wished that they would go back to doing it. Dozens of swifts and swallows dart over the fields, but there were lots more bugs than birds to catch them.
It was about a 12-mile day, but seemed long because there were few places to stop. One enterprising and most welcome fellow and his wife had set up a little cafe (un-remarked in the guidebook) in the middle of nowhere; and whoever maintains the Camino had a couple of picnic areas. The Camino rest areas that we stopped in had large wasp populations, and the benches that were away from the wasps were covered with bird droppings. Our stops were brief as a result, and Calzadilla de la Cueza (population 60) was a delightful sight when we pulled in at 2:30. Anthea arrived at the hotel before us, and was keeping company with a cold beer in the bar.  I joined her for a cup of espresso, and Jim went to the room to test out the comfort of the beds.
Our Camino “miracle” for the day came in the form of Luis Angel (that’s his name on the Jacotrans van that carries backpacks from one town to the next). We called Jacotrans to make our reservations for Sahagun for tomorrow and Saturday; Senor Angel said that he was downstairs in the lobby. Anthea and I went down to talk with him in person; in half an hour, he had made reservations for us in Sahagun, and had recommended places for us to stay for the next two days, then made the reservations for those places. Turns out that he is the brother of the genial fellow who owns the hotel Camino Real, and both of the them seemed to greatly enjoy their conversations with Anthea.
After dinner, we spent our evening relaxing and catching up on news from home. Anthea and I went out about 10:00 to see if we could spot the Milky Way. A dozen or so people were still sitting out enjoying the calm night, including one fairly drunk guy sitting crosslegged on the stones in the middle of the patio with one of the half dozen local cats keeping him company. He introduced us to a friend, an older woman from New Jersey who also had been consorting with the house wine more than perhaps was advisable; they were of no help with the Milky Way. We saw a bat and a few moths; Mars and some scattered stars, but realized that we were going to hear a lot about New Jersey if we stayed around, so came back to the room.
The Camino often reminds us of the AlCan Highway, and the roads that connect Alaska towns with each other. It is a narrow strip of civilization, and the people along the road form a community with each other. The small towns exist in part to serve the numerous travelers, and they can tell you what’s ahead and seem happy to help you out.
A friend mentioned bicycling on the Camino. Each day, we are passed by dozens of cyclists, mostly fit guys with a sprinkling of younger women here and there. Once in a while we see an older couple, or a family with teens. On the meseta, they speed along, usually floating a “Buen Camino” behind them. On the steep and rough paths, they sometimes walk their bikes. About two-thirds are carrying all of their luggage with them in panniers and small backpacks; about a third must be using Jacotrans or some other method of luggage transport.
Tomorrow we meet Regina in Sahagun in the afternoon or evening (she’s flying into Madrid and taking a train from there). We will spend Saturday in Sahagun (about 170,000 people, and with plenty of history) to give Regina a chance to rest up, and start walking again on Sunday. It will change the dynamics of the trip to some extent, because she and Anthea will probably walk together much of the time; we will meet them for dinner we hope.
I’m sure there’s more, but 7:00 a.m. rolls around soon, and we’ll be back with more Camino stories tomorrow.
Early sun on the 12th century church and two peregrinos setting out for the day’s journey.

This angel on the Church of Santiago (also 12th century) lost part of its head as part of the destruction during the 1809 war of independence (from Napoleon).

A grove of trees catching the morning sun on the road leaving Carrion de los Condes. We  see groves like this fairly often, planted in straight rows.

Peregrinos on the road. 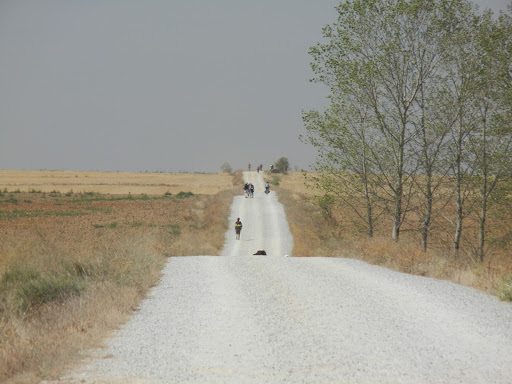 A healthy field of corn — no Midwest droughts here.

Part of a herd of sheep feeding in a harvested wheat field. There were at least a hundred sheep here, including several black ones. Few fields have fences, so someone must have been watching them to see that they didn’t stray. We see very few farm animals, but dogs and cats (especially cats) in the villages and cities. 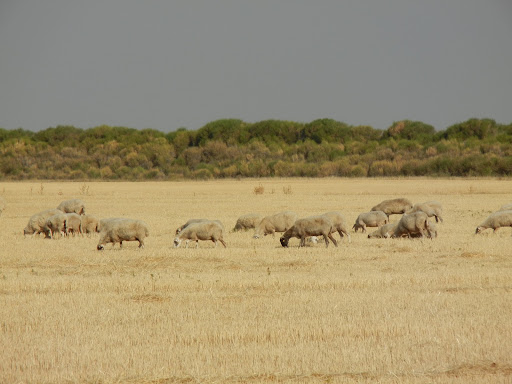 The little rest area/cafe that appeared unexpectedly about halfway through the day. Pepsi never tasted so good.

An adobe wall — mud and straw — in the village of Calzadilla de la Cueza. We also saw adobe bricks in several places.

The Jacotrans van that carries my backpack (and others) in the Burgos area.

Our hotel, owned and personally run by a former peregrino. It was recommended in John Brierley’s  guide and we would enthusiastically add our praises.

The evening sky and meseta, across the street from our hotel.

A typical hotel dining room — everyone comes in during the first half hour of meal service. Sometimes you can order from a printed menu del dia; at Camino Real, the owner/waiter told us what our vegetarian choices were.

Anthea with her white asparagus from the first course salad. White asparagus is a specialty of northern Spain and shows up by itself as a tapas or appetizer, in salads, in vegetable dishes — everywhere except dessert.

The house wine that we drank with dinner. It was fine, better than last night’s wine in a jug.