Posted on October 16, 2012 by Road Trip Teri
29 degrees C. . . . 33 degrees C. . . .  34 degrees C. — At 2:00 p.m., it just keeps getting hotter. People in the Lower 48 and elsewhere are used to this — the Alaskans are not.  We’ve retreated to the air conditioned, wi-fi-ed, electrified Starbucks at the Mall for a break from the sun and heat. We came here last November, when it offered dry warmth and a break from the Barcelona rain. It’s good to have a retreat — we are thinking that there won’t be many Starbucks along the Camino (I haven’t heard of any).
For want of air conditioning last night because the power in the room was out, we slept with the balcony window open. Anthea and I woke at 5:30 a.m. to (Anthea’s words) “the sound of three guys walking down the street singing – rather well – about Barcelona. To the tune of ‘Yellow Submarine.’ …okay!” They were clapping, and alternating the singing with marching orders.
When we were here last November, the beach featured surf and black-clad surfers, even on rainy days. In the late-autumn sun, a few brave souls soaked up rays, and people walked the beach. Now, in August, umbrellas shade half the sand, and bikini-ed and Speedo-ed bodies cover the rest. No surf today, but at least a little on-shore breeze cooled us as we ate our lunch (seedy green grapes and croissants from the Market and chocolate from Escriba) on a palm-shaded bench.
. . . Now it’s been an hour and a half of chilling and computing,  and we’re ready for a nap — it’s a good three miles or more back to the hotel, so we’re getting our walking for the day in (about five miles so far).
[Later] Our twelve miles today (that’s 3/4 of a Camino day, although without the 20-pound backpacks) hardly seemed difficult, except for the heat. Barcelona makes it easy and pleasant to walk — the traffic lights give pedestrians lots of time to get across, the drivers obey the signals (OK, the cabbies push it a bit), the sidewalks are wide and clean, and often shaded with sycamore (plane) trees. Motorcyclists don’t drive on the sidewalks (as in Athens), bicyclists don’t claim them for their own (as in Anchorage), almost everyone cleans up after their dogs, and the pavements don’t resemble an obstacle course for the unwary.
Anthea and Jim have packed, and I should be finishing up. This is one of the drawbacks of RVs and backpacks. Everything must have a place, and must go back into it. It’s a lot of time spent  unpacking and repacking, and I know that answer — just take less stuff. At some point, we may discuss that, but for tonight, it must be fitted into place for tomorrow’s train trip to Pamplona.
Regina, meeting us at Sea-Tac. 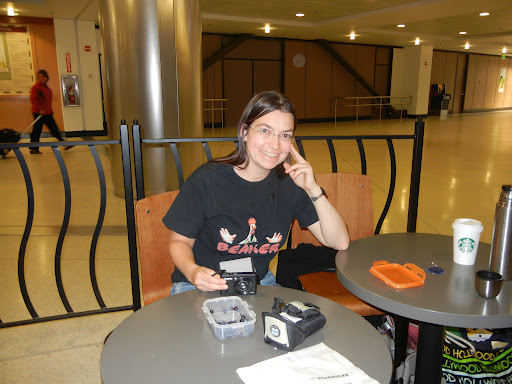 Candy booth at La Bouqueria, the Market, by Anthea. 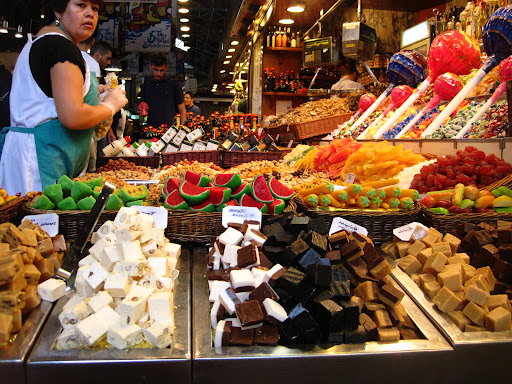 African street vendor at Port Vell on the Mediterranean. These guys sell knock-offs of designer sunglasses and purses, toys, jewelry and more. We saw lots of them in Athens. I don’t know if they are more legal here. In Athens, the police would tolerate them for a while, then make a sweep through to move them out. The goods for sale are laid out on a sheet that can be quickly pulled together and run away with, to move  to a different location. We saw very few in November, but this is prime tourist season now, and dozens of them had laid out their wares in the tourists’ paths near the beach. 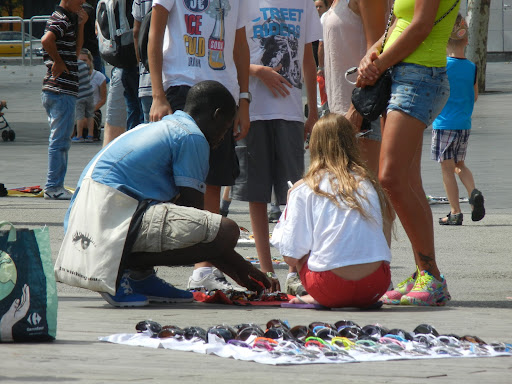 Street “statue,” Las Ramblas. There are a dozen or so people along Las Ramblas (the mile-long pedestrian stretch, a paved over river bed, that runs from Plaza Catalunya to the beach) who are dressed and painted as a clown, St. Michael the Archangel, an alien, a bronze cowboy, and a lady dressed as a blue surrealist painting with drawers extending from her skirt, and this guy who maintained this pose for minutes on end. 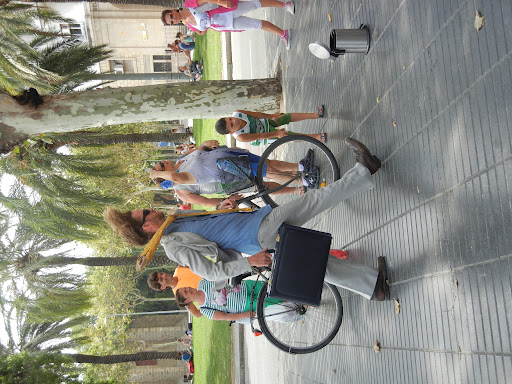 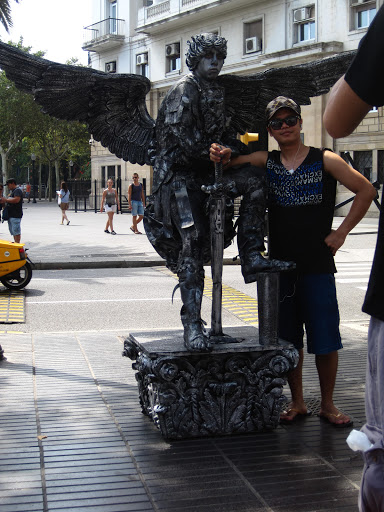 Jim and Anthea, unpainted, on a Barcelona street corner. 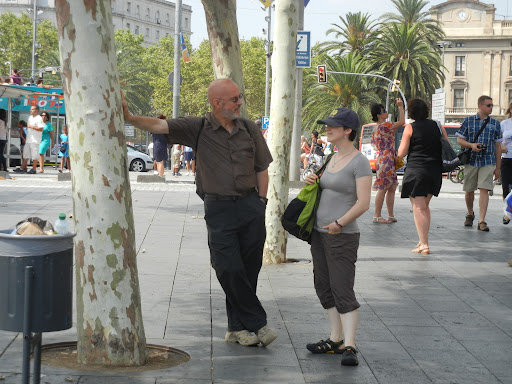 Turtles for sale on Las Ramblas — they are 90 euros each, so they must be special. The vendor also had rabbits, ducklings, chickens, hamsters, and more sizes and varieties of turtles. 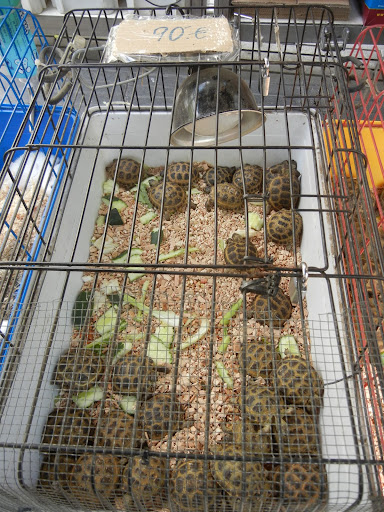 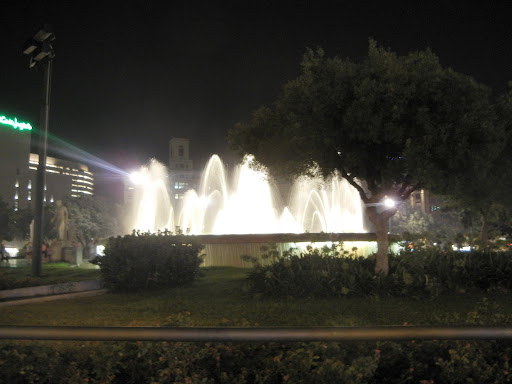 Fountains with figures (I don’t know whether these are people or statues — Anthea took the photo, and she’s asleep). 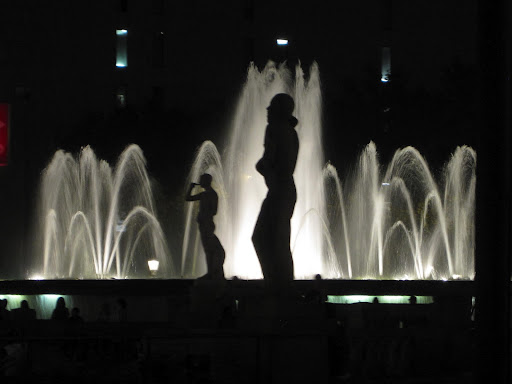