Posted on October 16, 2012 by Road Trip Teri
The penultimate day — tomorrow we arrive in Santiago. Jim and I almost arrived in Santiago today. We entirely missed the correct turnoff to Arca O Pino, our destination and were almost at the Santiago airport before we decided we had to be wrong. We had in fact gone about 6 kilometers too far. We slogged back downhill through the mud that squished underfoot most of the day and stopped at a hotel we’d passed earlier. The most excellent owner (an Englishman who owns three hotels in the area) was at the bar and pointed out where we’d gone wrong. He called the owner of our pension in Arca, who came out and picked us up and took us to home for the night. Peg and Tom and Regina and Anthea had long since arrived and were enjoying themselves in the bar; we all went directly to the pizza place that they had picked out for dinner. The consequence of our getting lost was that we ended the day with around 17 1/2 miles, compared to the 14 accumulated by the rest of the group. An extra 3 1/2 miles in rain and mud should get us lots of good karma points somewhere. At the moment, it’s achieved cold, muddy shoes and socks that will have to be washed before bedtime.
One clue that we might be on the wrong path was that we encountered only a couple of other people in the last hour — a couple of French guys with a cute dog who said that they were planning to spend the night at Mount Gozo just outside Santiago and who had no idea where Arca was; the other a woman who said that she was walking home from Santiago (you follow blue arrows to do that; we had seen them but not known what they were), and who also had no clue about Arca. Before that, we were passed by a steady stream of peregrinos and cyclists.
Mud — the rain started just as we left town, and returned on and off all day long. This was the fourth straight day of rain; the dirt paths have turned to streams in some places and mud beds in others. Much of the day was in pine and eucalyptus forest, with red needles, red leaves, and strips of red eucalyptus bark littering the mud and rocks. We squished uphill and sloshed downhill; sometimes with ponchos on, sometimes enjoying a few brief moments of sun.
The wildlife for the day included chickens (sometimes crossing the road), sheep, cows, horses, cats, and dogs, plus the  wild birds singing beautifully and a spider or two.
One pleasant break in the day was afternoon coffee with an Irish couple and an English girl and her mother who were on a walking tour from Sarria to Santiago. The Irishman was asking Regina about global warming, and the Alaskans about Sarah Palin and oil companies. He, like the earlier Spanish guy who attributed Spain’s troubles to the U.S., attributed Ireland’s troubles in part at least to financial practices set moving by the U.S. in the early 1990s. He also said that the European Union was created in part to avoid further European wars, but that allowing countries with less developed financial systems into the euro zone and then expecting them to be able to operate by German rules was asking for trouble.
Once again we are in a pension without wi-fi, so I am hanging out with Regina and Anthea at the lounge of their albergue across the street. I’m wrapping up early so that we can get started at 7:45 again, with breakfast, and then be on our way to Santiago.
Tomorrow — Santiago!
Linemen working on electric wires along the Camino (Tom Lazio in front of the truck; Jim, Anthea and Regina down the road.) 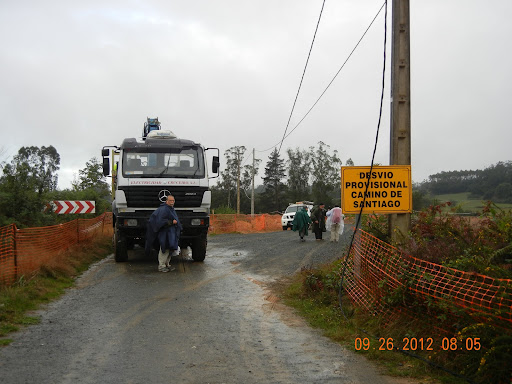 Chestnut husks littering the path at one point. They seem to have started falling in the past few days, perhaps only in this part of Galicia.

A sample of the path for much of the day.

Peg and Teri along the way; taken by a fellow peregrino.

Anthea eating breakfast #2, and feeding bits of the fried egg sandwich to the local cat.

The bar with the cats was very crowded, inside and out (the rain had stopped for a while). Note the backpacks lined up against the windows.

Free range chickens in a field.

Tractors for sale near a Spanish town. Note the John Deere — we see a lot of them.

An ewe with her lambs.

Tonight’s rainbow. It showed up as we were being driven back to the pension by the kind owner, and continued for an hour or so.

Nearly full moon in a clearing sky, tonight about 9:30 p.m.